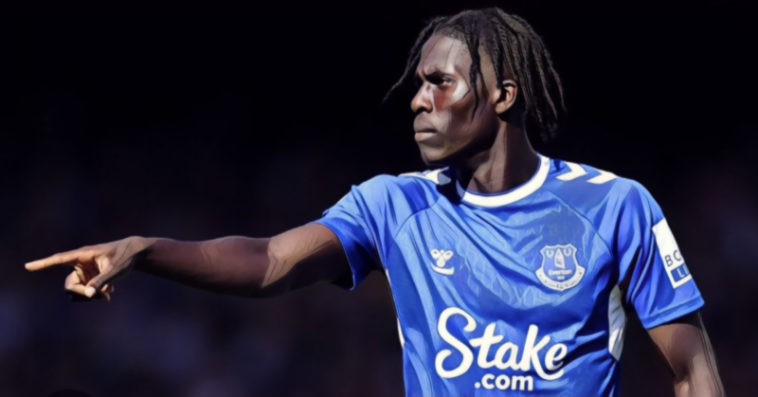 Despite scepticism entering the season about Everton’s prospects for success, they currently sit 12th in the table and have earned recent victories against their midtable contemporaries Crystal Palace, Southampton, and West Ham. While their transfer activity in the summer was curtailed due to financial restrictions, Everton did make a few shrewd acquisitions in the summer market. Perhaps their most important and transformative signing has been 21-year-old central midfielder Amadou Onana from Lille.

The key to Onana’s initial success for Everton is that unlike many of their purchases in recent years, the Belgian ideally fits the style of play the manager is seeking to employ. Whether using a 3-4-3, a 4-3-3, or a 4-2-3-1, Frank Lampard seems to want the Toffees to defend deep and primarily attack directly in transition. They lead the league in tackles made in the defensive third and have the second most pressures in that area. While they attempted the third fewest long passes and switch passes last campaign, they make the fourth and fifth most respectively this year. This suggests Everton are seeking to invite opposition onto them out of possession, defend aggressively in their own third to retrieve possession, and then seek to get the ball up the pitch as quickly as possible using the full width and length of the pitch.

This tactical approach mitigates many of Onana’s weaknesses as a midfielder since it asks little of him in possession. For Lille, he did not offer himself as a passing option from deep often enough for the centre-backs, and when he did, he didn’t use his body effectively to receive and circulate the ball. His touches aren’t always the cleanest and he’s generally a safe, risk-averse, and underwhelming passer. Everton, though, are not concerned with building play through the pitch or maintaining possession for long spells of the game. Their style hinges on controlling the game without the ball and maximizing transitional moments, both of which Onana excels at.

He is an extremely active defensive presence who is capable of stopping attacks across the pitch. Compared to other midfielders in Europe’s top five leagues, he ranks above the 90th percentile for defensive actions that led to either goals or shots, but is also within the 80th percentile for tackles in the defensive third and the 88th percentile for tackles in the middle third. For a team that is very well-drilled defensively in their own third but lacks such organization higher up the pitch, having a ball-winning midfielder who can be so effective at retrieving the ball in all areas of the pitch is invaluable. Onana assures Everton can maintain some level of defensive pressure no matter what phase of play they’re in.

In addition to his stamina and work rate, Onana’s 6’4” stature also aids his defensive contribution. He ranks in the 91st percentile for aerial duels won, helps Everton from defending set pieces, and can use his long stride and limbs to better his tackling ability. These physical advantages have also aided his transition to Lampard’s style. Everton’s midfielders spend lots of time in or just ahead of their own box, and often have to engage in plenty of physical and aerial duels. Onana has been able to more or less seamlessly transition to this defensive approach, and this is no doubt aided by his obvious physical strength.

With the ball, Onana’s best trait is his direct ball-carrying. Most elite ball-carrying midfielders excel at carrying through pressure, inviting the opposition onto them before gliding past them, which in turn disrupts their defensive structure and allows the team with the ball to break defensive lines. Onana’s carrying is used differently at Everton, shown by the fact that he ranks in the 80th percentile for dribbles completed but only in the 13th percentile for progressive carries. This is partly because progressive carries exclude carries from the defending 40% of the pitch, which given Everton’s style, is where many of Onana’s carries will be coming from. However, it’s also because Onana does not necessarily carry the ball over long distances or through pressure frequently. Instead, he excels at driving into space which either allows Everton to continue a counter-attack or win a foul if Onana is tackled. He’s not the sort of midfielder who dribbles through congested areas and instead maximizes Everton’s transitional ability.

Onana and Everton are an ideal match of player and team style. His defensive proactivity and direct ball-carrying facilitates Lampard’s direct approach in possession and aggressive, physically-taxing approach out of possession. The Belgian is also just 21 and will undoubtedly improve, though it’s unclear whether Lampard can truly improve his weaknesses in position and possession.

Nevertheless, he’s breathed new life into the Everton midfield and enabled the club to mitigate many of their weaknesses without the ball. If Everton maintains their form and avoid the drop, as many thought they were doomed to do, Amadou Onana will be a key reason why.