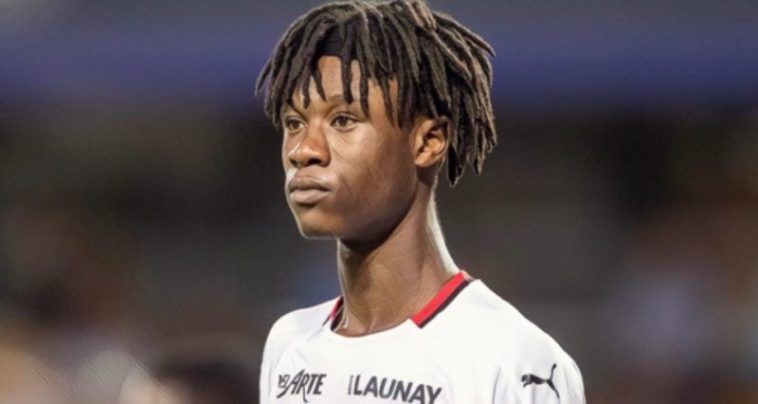 The defensive midfielder has become an increasingly important position in modern football. With many teams preaching a high-pressing, attack-minded style of football, having a player who can shield the defensive line, cover the space behind the attacking unit, and progress possession effectively is crucial to achieving success.

Joshua Kimmich for a resurgent Bayern Munich, Casemiro for an improved Real Madrid, and Wilfried Ndidi for an excellent Leicester City are all number sixes who have been fundamental to their team’s performances. Given this, the hype surrounding 17-year-old Rennes defensive midfielder Eduardo Camavinga is unsurprising.

Under head coach Julien Stephan, Rennes have excelled in Ligue 1 last season, achieving a third-place finish ahead of established names such as AS Monaco, OGC Nice, and Olympique Lyon. Stephan has preferred a 4-4-2 but has also used a 5-3-2 on several occasions. In both setups, Camavinga poses as the deepest midfielder, dropping deep to assist build-up and progress possession.

Camavinga shows an intelligence and assuredness in possession that belies his inexperience. He ensures that he is always in space to receive a pass and support a teammate by providing an easy passing option. He reads the game superbly, which allows him to dictate the course of the attack from deep by moving the ball into favourable positions.

Camavinga’s comfort with both short, medium, and long-range passing means he is a capable enough passer to switch the play effectively and penetrate opposition defensive lines with progressive passes off his impressive left foot. He doesn’t seek to simply circulate the ball but instead serves as a proactive instigator of attacking sequences.

This is also reflected in the tempo of his passing, for he seeks to move the ball as quickly as possible to ensure that build-up play is not stodgy and slow. Should he come under pressure, the French U21 international excels at suddenly accelerating to evade opposition markers. For a player who is so young, he has a remarkably complete repertoire of skills when in possession.

Defensively, Camavinga is equally impressive. With 1.4 interceptions per 90, it’s clear that the teenager is as proactive when defending as he is when in possession. He is often eager to press opponents when possible and seeks to win the ball as high up the pitch as possible.

Perhaps Camavinga’s prime defensive strength is his ability to recover lost ground and win back the ball. Time and again this season, he has thwarted opposition attacks when they bypass the Rennes press by using his searing pace to track back and win back the ball. His 4.2 tackles per 90 reflect his prowess in sheer ball-winning.

Beyond athleticism, Camavinga is able to utilize his reading of the game that serves him so well in possession while defending. He can anticipate opposition attacking moves to quell them before they develop, complementing his proactive playing style and ensuring that his aggression and tenacity are efficient and productive.

At 17, Camavinga obviously has to improve facets of his play. He is very one-footed, a fact that could hinder his efficacy in possession should teams look to expose it more frequently. Like many young players, he can be rash. He has a tendency to go to ground too frequently when it is often unnecessary.

Any club that acquires Camavinga will have to nurture him prudently, but he has enough to his game already to merit a move to a top club. He has been most heavily linked with Manchester United and Real Madrid, of which he appears to closer to a move to the latter judging from reports.

At United, he would likely receive more game time given that his competition for the defensive midfield role would be with an ageing Nemanja Matic and Scott McTominay, who for all his reliability and consistency is no Casemiro. The move would make sense for the English club given that they need a better defensive midfielder, especially if they hope to play both Paul Pogba and Bruno Fernandes in the same team. Camavinga could satisfy that requirement for years to come.

For Real Madrid, Camavinga would likely be deprived of regular first-team football for a few seasons, but the move could still be hugely beneficial for his development. Casemiro has been Los Blancos’ anchor in midfield for several seasons and is a favourite of Zinedine Zidane, but is among the most burdened players at Madrid.

He rarely receives adequate defensive support from his creative midfielder partners, and at 28, he may not be able to carry his defensive duties for much longer. Camavinga would be the ideal understudy to Casemiro. He could step in for the Brazilian when he needed resting and ease himself into Spanish football. Zidane’s track record with Madrid’s youth players has been mixed, but it appears that the 17-year-old is willing to take the risk.

Whether he ends up in the Spanish capital, Manchester, or any other venue for a top European club, Eduardo Camavinga is among the most exciting young prospects in football at present and is almost certainly destined for an illustrious career.