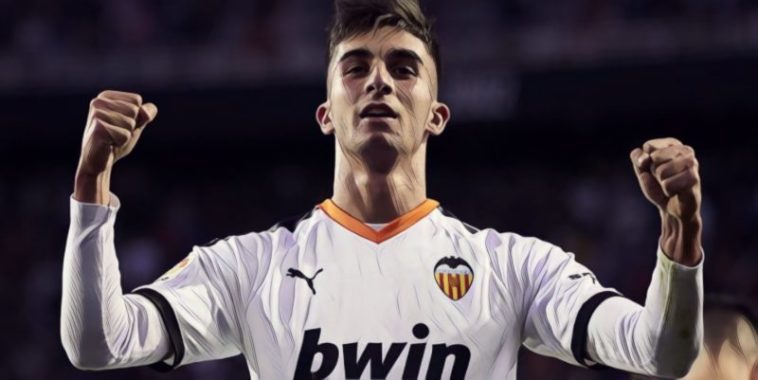 One of La Liga’s foremost clubs, Valencia, has struggled this season. Despite emerging from a Champions League group with Ajax and Chelsea, they were eviscerated by Atalanta in the Round of 16 and have faced a lackluster domestic campaign. However, one bright spot in an otherwise unremarkable season has been the emergence of 20-year-old Spaniard Ferran Torres.

Since taking over from Marcelino, head coach Albert Celades has maintained the 4-4-2 implemented by his predecessor. The system is predicated on defensive solidity and excellence in transition, as Valencia look to release their pacy wingers and strikers at the first opportunity.

In attack, Valencia often struggle to play through the centre given the large gap between their strikers and their midfielders. As such, they prefer to attack out wide, where the likes of Torres, Carlos Soler, and Goncalo Guedes can utilize their pace, skill, and creativity to isolate defenders on the flanks before cutting inside to pose as an offensive threat. With Guedes suffering from various injuries, Torres has become a key man for Celades. Both footed and capable of playing either flank, he has firmly established himself as a starting player for Valencia during the past several months.

With the amount of game time he has received, one could perhaps be unimpressed when looking at Torres’ stats this campaign. In 25 La Liga appearances for Los Murcielagos, Torres has just 4 goals and 4 assists, a fairly mediocre output for a player who is being tipped for such a promising future. There is no doubt that the 20-year-old needs to improve his final product, but his low goals and assists figures are as much a reflection of the Torres’ playing style and role as they are of his deficiency as a player.

In Valencia’s 4-4-2, Torres operates more as a wide midfielder than a traditional winger. While he is given license to drift infield, he is often doing so from deeper positions and has to carry the ball himself in order to arrive in the final third, preventing him from regularly arriving in goal-scoring positions. The natural limitations of a 4-4-2 mean that Torres cannot be expected to have the same offensive output as other young attackers who play in formations that make it easier to attack the box, such as a 4-2-3-1, 3-4-3, or 4-3-3.

More pertinently though, Torres has emerged as a vital cog in Valencia’s build-up play. He can find pockets of space in between the lines and play penetrative passes that break opposition defensive lines. These passes do not always translate into assists, but they are essential for the team’s ball progression.

Torres also excels at creating chances from wide areas. He is equally comfortable hugging the touchline as he is drifting infield, using his pace and dribbling to isolate defenders and create space for crossing opportunities. He is particularly adept at using his raw pace to beat players, knocking the ball ahead of himself and winning foot races time and after time. Again, his final product from crosses may not always be the best, but he has the vision and ability to assess the movement of his teammates and arrive in areas where he can deliver passes.

That pass from Ferran Torres is exquisite 🤤

Rodrigo finishes the move off to make it 6-0! #LaLiga pic.twitter.com/VIFrpni9dF

Torres is a raw talent, but his strengths of pace, skill, movement, and vision are difficult to coach and rare to find. Especially in the modern game, finding a player who is comfortable both cutting inside and posing as a traditional wide-man is rare, and could be a huge asset for any side. Add into this that he is a willing defender and tirelessly tracks back, and it becomes clearer as to why Torres is attracting attention from Europe’s elite teams.

The Spaniard has been linked to a number of clubs over the past eighteen months. Juventus, Manchester United, Real Madrid, and Barcelona are all reportedly interested in the youngster. At the moment, however, it appears that Liverpool and Manchester City are the frontrunners to sign him.

Should he make the switch to Merseyside, it could be a suitable move for both parties. Liverpool could use more attacking options off the bench, and while they have been heavily linked to Timo Werner, Torres could perhaps be better suited for the club’s needs.

Werner is much further along in his development and would be ideal for Jurgen Klopp’s stylistic approach, but he would likely demand a starting role. Torres, meanwhile, could be used as and when needed to rest the likes of Sadio Mane and Mohammed Salah. All the while, he would be learning from arguably the best coach in Europe and mature into a more complete player.

🗞Gossip: Txiki wants him as replacement for Sane. pic.twitter.com/Az6GRnZY9M

Moving to Manchester City would also make sense. With the departure of Leroy Sane appearing increasingly likely, Guardiola could use with reinforcements for the wing positions. Torres would certainly not be a like for like replacement for Sane, but he has the technical ability to thrive under a coach like Guardiola. If he can adapt to the tactically complex style, the youngster could thrive as a winger in Guardiola’s 4-1-4-1. With his work rate and vision, he could even be reworked into an attack-minded central midfielder in the mould of David Silva.

Whether he makes his move this summer or in future years, Ferran Torres seems destined for a promising career in the highest echelons of European football. For now, he remains among the most exciting prospects in Spanish football.