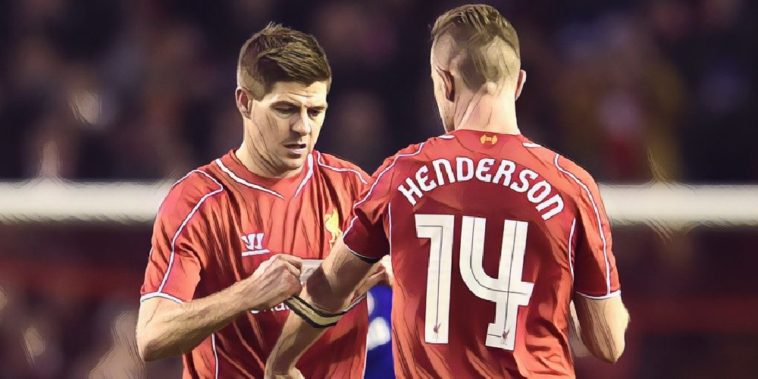 Picking up the ball just beyond the centre circle at Carrow Road and playing a raking long ball up to field to a lurking Sadio Mane, Jordan Henderson had just provided an assist right out of the Steven Gerrard scrapbook.

The 29-year-old had just recorded his fifth assist of the season, much to the delight of the travelling Liverpool fans who must have sensed that their side needed something special to find the breakthrough against a stubborn Norwich City.

Something special has been in Henderson’s remit this season as the Reds skipper looks finally set to step out of the shadow of his former midfield mentor and become an Anfield legend in his own right.

His assist for Mane on Saturday was the work of a player who is finally comfortable in his own skin as a Liverpool captain and a vital component of Jurgen Klopp’s dominating Reds machine.

Many will point to crucial role he played in the club’s  Champions League glory last season as the obvious turning point in a career that, had so many times threatened to plateau and falter. However, the evolution of Henderson under his German manager has been a slow and steady burner that has seen the midfielder finally step out of the shadow cast by Gerrard way back in 2012.

With Gerrard ageing and faltering in the side, Henderson was seen as as the bright youthful prospect that would fill the inevitable void left by the Liverpool icon when he arrived from Sunderland for big money. Framed in that context it is easy to understand why the midfielder struggled with the burden of expectation in his fledgeling days.

Many accused him of hitting too many sideways passes and faltering when the side needed some inspiration. Henderson became an all too easy scapegoat for the many failings that Jurgen Klopp inherited when he replaced Brendan Rodgers back in October 2015.

The former Borussia Dortmund boss though, like his two predecessors before him in the dugout, obviously noticed a lot of Henderson’s positive characteristics behind the scenes, the type of traits that so often goes unheralded.

In Klopp’s early days of the frenetic counter-pressing on Merseyside, Henderson’s athleticism was a wonderful asset and his work rate was simply exceptional.

Working with a top class coach unlocked another level in Henderson’s game but as the summer of 2018 arrived it looked as though the reshuffling of Liverpool’s midfield pack would see the number 14 lose his nailed on starting place in the team as Naby Keita and Fabinho arrived for big money to bolster the ranks.

However, the England midfielder has dug in since that eventful summer splurge and has grown into one of the most important players in the team.

People will point to the blockbuster stats of other high profile midfielders out there and dismiss Henderson’s role on paper. There is some justifying this viewpoint on the player, of course, a goal return of just six strikes since the start of the 2016-season is hardly anything to croon over for example. However, this would be a near-criminal oversight for such a well-rounded midfielder.

On top of the endless pressing and selfless tackles; Henderson plays a crucial tactical role to keep the Reds attacking verve in full flow. When operating on the right of Klopp’s midfield three, the England international allows Trent Alexander-Arnold to bomb forward and cause chaos, safe in the knowledge that his teammate is covering the flank behind him at full-back.

What a captain Jordan Henderson has been for the Reds 🔥 pic.twitter.com/RxoUEITLzq

Henderson’s instinctive reading of the game has allowed his midfield colleagues to get a stranglehold of proceedings so often in matches this season. An admirable return of 55 tackles and 24 interceptions so far this term in the Premier League highlights the critical importance of his role in the engine room of Liverpool’s press.

Perhaps more impressive though has been the combination of this graft with the increasing confidence he has shown in getting forward. His haul of three goals and five assists is his best attacking return since the days of Rodgers and Luis Suarez and his composure in delivering that crucial final ball has looked so much more refined over the past two seasons, with Klopp giving his midfield general more license to get forward with Fabinho operating in the deeper number six role.

Where the brownie points really add up though is in the England international’s increasing authority as club captain. He speaks very well and instils a real hardened mentality on the pitch that has seen his side race to a record-breaking 76 points from 26 games.

The England midfielder has been the model of composure on and off the field for Liverpool this season as they have navigated swollen expectations and stubborn opponents; whilst refusing to even once stand back and admire what they have achieved since the start of the 2017/18 season. His role in the dressing room has reportedly been huge in this and smacks once again of a wise and maturing skipper at the very top of his game.

Henderson also knows, better than anyone else in Klopp’s squad, the sting of failure and falling short. His collection of runners up medals is painfully high for a man who has spent eight years at such a big club. And yet it looks as though he is using that shortfall in his career to fuel what has been his best season to date in the Red of Liverpool.

“In this country, he’s not been appreciated enough throughout his career, but now he’s getting the recognition.”

If Liverpool can record the five wins currently necessary to bring home a first title in 30 years then Henderson will have truly stepped out from Gerrard’s shadow and done what the Anfield legend could never achieve. He may never have been the man to fill the Gerrard void, although Henderson has evolved into a player on the cusp of iconic status at Liverpool.

His abilities as a footballer will never come close to the former number eight for sure, but in his own right, he is now up there with Gerrard as a bona fide legend of the Anfield club.