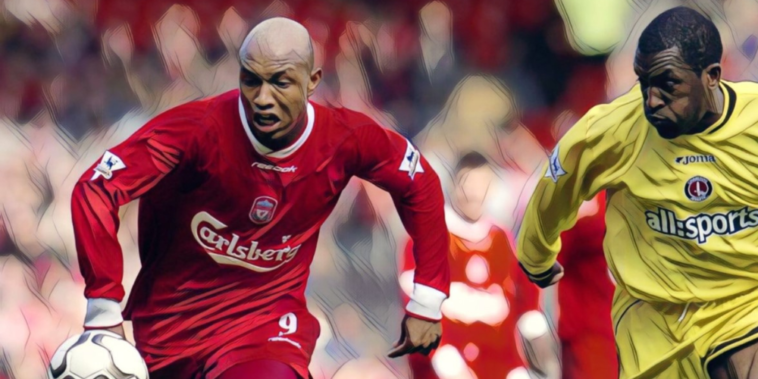 The World Cup is the biggest stage in football as the planet pauses for the game’s greatest event. A successful tournament can cement a player’s place in history and past editions have seen several stars make their name.

There is no bigger shop window than a World Cup, but sides should take caution when splashing the cash on talents who have thrived at major tournaments.

Here are five footballers who flopped after post-World Cup transfers to the Premier League.

One of the least memorable members of France’s victorious squad from 1998, Stéphane Guivarc’h started the final win over Brazil as Les Bleus were crowned world champions on home soil

Guivarc’h broke into the France side following prolific form domestically, as he won the Ligue 1 Golden Boot in consecutive campaigns for Rennes and Auxerre. The second of those successes saw Guivarc’h end the 1997/98 campaign as leading scorer in the league and UEFA Cup, form which saw him start four fixtures for France at the World Cup, including each game from the quarter-finals onwards.

The forward failed to find the net in the tournament, but ended with a World Cup winners’ medal as Zinedine Zidane’s double downed Brazil in the final. He moved to Newcastle that summer with hopes high that the Frenchman could form a fine understanding with Alan Shearer.

He scored on his debut against Liverpool, but made just three further appearances for the Magpies. Guivarc’h fell out of favour after Ruud Gullit replaced Kenny Dalglish as manager and was sold to Rangers in November 1998, just months after his arrival.

El Hadji Diouf formed part of a Senegal team that captured the imagination at the 2002 World Cup, beating holders France in the tournament’s opening fixture.

Senegal surprised to reach the quarter-finals and Diouf was viewed as his side’s star name, as he earned inclusion in the World Cup’s All-Star Team and won the African Footballer of the Year award for his performances.

Liverpool won the race for his signature and secured a £10m deal for the Lens forward, as Gerard Houllier looked to strengthen a side that had finished as Premier League runners-up the previous season.

The Reds turned down the chance to permanently sign loanee Nicolas Anelka in favour of the deal for Diouf, a decision the club came to regret as the Senegalese striker struggled at Anfield. He scored twice on his home debut against Southampton, but it would be a seven month wait before the forward next troubled the scoresheet.

“He has one of the worst strike rates of any forward in Liverpool history.

“He’s the only no. 9 ever to go through a whole season without scoring, in fact he’s probably the only no. 9 of any club to do that. He was always the last one to get picked in training.”

His second season was even worse, as he became the first Liverpool number nine in history to go an entire season without scoring. Controversial clashes with club greats Steven Gerrard and Jamie Carragher have ensured his popularity on Merseyside is minimal, while an incident which saw Diouf spit at a Celtic fan during a UEFA Cup tie between the teams further soured his reputation.

Salif Diao joined compatriot Diouf at Liverpool in 2002, having impressed alongside the forward during Senegal’s successful run to the World Cup quarter-finals.

The powerful midfielder had formed a strong midfield axis with Papa Bouba Diop for the national team, but struggled to make any form of an impression at Anfield. He made 26 league appearances – often out of position in defence – during his first season, but fell out of favour following a disappointing debut campaign.

Rafael Benitez’s arrival as manager in 2004 saw Diao moved on, as he spent time on loan at Birmingham, Portsmouth and Stoke before leaving Liverpool on a permanent basis for the latter.

Kleberson had been hailed as the ‘driving force’ of Brazil’s World Cup success in 2002, with manager Luiz Felipe Scolari lauding the midfielder for his contribution to the cause.

Alongside the brilliance of the ‘Three Rs’ in Ronaldo, Rivaldo and Ronaldinho, Kleberson impressed as Brazil were crowned World Cup winners for a fifth time in Japan and South Korea.

The following summer Manchester United agreed a deal to sign Kleberson from Athletico Paranaense, with Sir Alex Ferguson confident the 24-year-old could be a long-term solution in the Red Devils’ engine room. Such was his confidence, Juan Sebastien Veron – signed in a British record deal two years earlier – was allowed to depart, but Ferguson ended up swapping one South American disappointment for another.

Kleberson failed to live up to expectations and made just 20 league appearances across two seasons, with fitness issues in part to blame for his struggle to adapt to the Premier League. He was sold to Besiktas in 2005, before embarking on a nomadic career that never again reached the heights of 2002.

Isaksson appeared a shrewd signing for Manchester City in 2006, as the Citizens secured the signing of the Sweden number one.

The goalkeeper had impressed during his team’s run to the last 16 at that summer’s World Cup, keeping two clean sheets, before Sweden’s exit to host nation Germany in the first knockout round.

Signed for just £2m, it appeared a bargain purchase for an experienced international shot-stopper, but Isaksson proved an underwhelming signing. Fitness issues plagued the goalkeeper at Eastlands and he made just 19 league appearances across two seasons, struggling to dislodge Nicky Weaver as number one.

His final appearance for City proved a harrowing one, as Sven-Göran Eriksson side were thrashed 8-1 at Middlesbrough on the final weekend of the 2007/08 season.