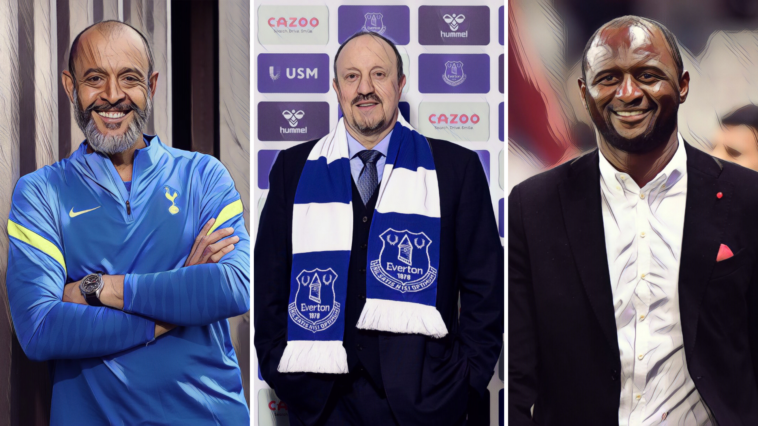 Premier League football has seen several managerial changes over the past week, headlined by Tottenham ending their protracted search for a new manager with the appointment of former Wolves boss Nuno Espirito Santo.

Rafael Benitez became Everton’s controversial choice to succeed Carlo Ancelotti, despite unrest from the fanbase at the arrival of the former Liverpool manager at Goodison Park.

Elsewhere Crystal Palace are nearing closer to the announcement of Patrick Vieira as their new manager, with the ex-Arsenal captain seemingly set to replace Roy Hodgson after his decision to step down at the end of the season.

Harry Kane has made no secret of his desire to leave Tottenham in search of silverware this summer, with the England captain yet to win a major trophy since coming through the academy ranks.

Kane enjoyed an exceptional individual campaign last season to finish as both the leading scorer and assist provider in the Premier League, contributing directly to 54.4% of the club’s goals in the division during the 2020/21 campaign.

Manchester City are understood to have made an approach for the 27-year-old with a proposal worth around £100m, whilst both Manchester United and Chelsea have been linked with a British transfer-record move.

Losing a player of Kane’s calibre would leave Nuno with an almost impossible task to replace the talisman, though a figure in excess of £100m could provide much-needed funds to mould the squad in his own shape.

However, Kane’s departure would weaken Spurs whilst simultaneously strengthening a direct competitor and his exit would be deemed a lack of ambition from the north Londoners, given their strong position with the forward having three years remaining on his current contract.

Nuno has one of football’s toughest operators in chairman Daniel Levy behind him, but is the Portuguese prepared to risk beginning his reign with unrest by keeping a player who clearly wants out?

Mauricio Pochettino’s reign saw the Argentine turn Spurs into Champions League regulars whilst maintaining an attractive brand of football, before the arrival of Jose Mourinho was designed to provide substance over style.

Mourinho was appointed given his proven track-record of winning trophies, though his pragmatic style of football failed to win admirers and as results diminished so did his popularity.

Daniel Levy discussed his want for a manager whose principles were founded on attacking and exciting football, though Wolves arguably played some of the division’s most uninspiring football under Nuno last season.

The long-term injury of Raul Jimenez certainly impacted their style, but Nuno’s side were far from a pretty watch and convincing the supporters he can provide both style and substance will go a long way to winning them over.

Tottenham were one of the Premier League’s best defensive teams only a few seasons ago, but the transition from the ageing long-term partnership of Toby Alderweireld and Jan Vertonghen has not proven smooth.

Alderweireld remains despite the departure of Vertonghen to Benfica last summer, but the Belgium international has not looked the player of old and is reportedly keen on an exit during the transfer window.

Neither Eric Dier or Davinson Sanchez have proven convincing options, whilst Joe Rodon and Japhet Tanganga remain relatively unproven at the highest level despite showing signs of potential.

If Nuno is to operate with the three-man backline that proved successful at Wolves, it may require wholesale changes at centre-back with Joachim Andersen and Jules Kounde the latest linked as potential new additions.

Easier said than done, we must admit, but Benitez is already up against with his Liverpool connection ensuring he has been given a far from warm welcome by sections of the Everton support.

Benitez has been down this road before after a similarly frost reception at Chelsea, though the Spaniard’s strong will ensured he weathered the Stamford Bridge storm to win the Europa League during that brief spell in west London.

He may never win a popularity contest at Chelsea, but he showed his mettle to bring success to the club despite struggling to get the fans onside.

A strong start at Everton will be crucial if he is to keep the wolves from the door and with just one 2020/21 top-half team (ninth-placed Leeds) in their opening six fixtures, he has the run to build early positivity.

The Toffees won just six of their 19 home fixtures in the Premier League last season with only the division’s bottom five taking less points at home, a stark comparison to their performances on the road with ranked fourth across the top-flight.

The return of fans to Goodison Park should go some way to helping end their Merseyside woes, with a strong home record key to the club’s hopes of challenging for European qualification.

Farhad Moshiri can hardly have been accused of not giving Everton a fighting chance of catching the Premier League’s elite, with only Chelsea besting the Toffees £299m for owner investment over a five-year period between 2014/15 and 2018/19.

Everton’s £299m dwarfs the figures invested by the owners of Liverpool (£75m), Arsenal (£0) and Tottenham (-£40m) over that same timeframe, but Moshiri’s resources have been squandered with a series of poor acquisitions.

Names such as Yannick Bolasie (£25m), Davy Klaassen (£23.6m), Alex Iwobi (£35m) and Yerry Mina (£28m) have all arrived for significant fees that have not been repaid in performances, and formulating a proper transfer strategy will be essential to avoiding more scattergun signings and market mistakes.

Benitez is understood to have been promised backing from the board and how he navigates the transfer window will be crucial to Everton’s hopes of success.

Crystal Palace find themselves in a similar situation to Tottenham with their leading light wanting out, Wilfried Zaha having again expressed a desire to leave Selhurst Park.

Zaha has long agitated for a move to a club playing European football, but has found his path away from the Eagles blocked, with his value to Palace outweighing the sums that suitors are prepared to spend.

Zaha came close to leaving in 2019 with Everton and Arsenal interested, though was priced out of a move with Palace rejecting one offer in excess of £70m.

No side is likely to approach with a figure anywhere close to that valuation this summer, though Palace must weigh up whether to allow Zaha – who has made nearly 400 appearances across two spells – the opportunity to test himself at a higher level should bids arrive.

Zaha’s potential exit could leave Crystal Palace in search of a reliable goalscorer, with the Ivorian having finished as the Eagles’ leading scorer with 11 Premier League goals in 2020/21.

Christian Benteke’s late season run of form earned him a new contract as the Belgian finished with 10 goals for the campaign, though the 30-year-old scored just six league goals across the previous three seasons combined.

No other player scored more than four in the Premier League last season and Palace will need more avenues to goal if they are to avoid a season of struggle in the top flight next term.

Palace’s management of their squad has been criminal in recent seasons with their July 1 released list containing 11 senior players, names such as Andros Townsend, Gary Cahill, James McCarthy, Patrick van Aanholt and Mamadou Sakho allowed to walk away.

Of the threadbare squad left at Selhurst Park, more than a third are aged over 30 and signing players for the future should be of paramount importance to Vieira and his recruitment team.

Palace made positive moves towards lowering the average age with the signings of Eberechi Eze and Nathan Ferguson last summer, with additions of a similar profile essential if the club are to avoid further mass change in the near future.

The huge number of players released on a free transfer has left Crystal Palace with a squad lacking the required depth for a Premier League campaign, one that is just a few injuries away from looking vastly out of its depth.

Recent reports have suggested that Vieira is set to be handed a healthy transfer budget despite the financial impact of the pandemic, which will certainly help as he plans for a mass overhaul of his squad.

Improving quality and quantity simultaneously can be difficult however, and the Eagles should be on alert for any potential bargains as the club seek depth this summer.

John Lundstram – who has walked away from Sheffield United on a free transfer – has been linked, as has fellow free agent Nikola Maksimovic following his departure from Napoli.