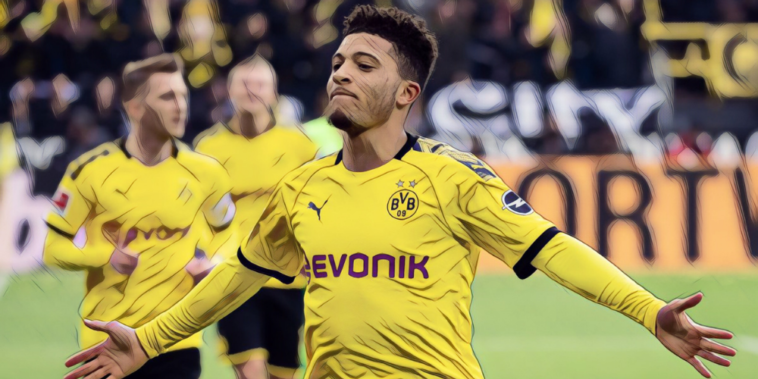 One of the most excruciating transfer sagas in recent memory is finally over. On Thursday, Manchester United announced they had reached an agreement with Borussia Dortmund to sign Jadon Sancho.

The deal, uncharacteristically for the Red Devils in recent seasons, has been met with unanimous admiration both within and beyond the fanbase.

The reason why is two-fold. 38 goals and 45 assists in 104 Bundesliga appearances is a remarkable return for a winger, even more so from a 21-year-old. Securing Sancho means United are acquiring one of the best players in the world in his position, and that’s an obvious source of excitement for any fanbase.

Beyond that, the former Manchester City youngster’s signing is symptomatic of United’s growing coherence under Solskjaer and John Murtough, United’s football director who is spearheading their recruitment as part of the club’s restructured hierarchy.

Sancho has not been bought primarily with a view to shirt sales and marketability, traits that pale in comparison to his qualities as a player. He plugs a clear and specific gap within Manchester United’s attack both through the position he plays and the attributes he can bring to the team.

The right-wing berth has long been a position of flux at United. Daniel James is useful in the role against bigger teams, where he can be trusted to protect his fullback in defence and spring forwards on the counter-attack. Mason Greenwood is a lethal marksman when can drive infield from the right flank to find space in the penalty area, and Marcus Rashford, long thought to be an inside forward from the left, has shown an ability to be productive as a creator from the right-hand side as well. In sum, Solskjaer has three players who can all do a serviceable job as right-wingers in specific contexts, but none of whom can offer a complete threat down that flank.

This is the void that Sancho fills. He is a uniquely rounded footballer, which is perhaps best shown by his statistics. 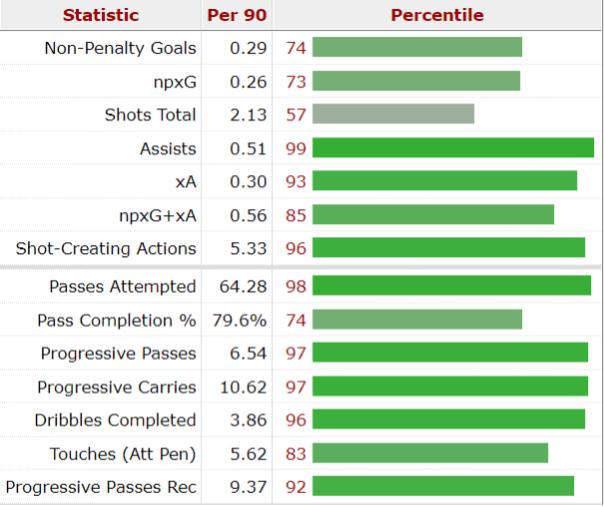 This data from FBRef (sourced from Statsbomb) shows Jadon Sancho’s statistics in the last year and measures their percentile rank compared to other attacking midfielders and wingers in Europe’s top five leagues. For every metric except total shots, he is well above-average. For most metrics, he’s in elite territory. Perhaps equally if not more important for United, he’s an attacker who suits their offensive style and complements their other players well.

Solskjaer encourages his team to play with a high degree of positional fluidity in attack, and it’s become an important method for United to confuse and unlock opposition defences. Sancho started on both wings for Dortmund, but would always drift and roam across the pitch to receive the ball. He has the technical ability to receive the ball at a variety of angles and the awareness to find space in between the lines, which bodes well in United’s positionally fluid attack.

When he receives the ball, Sancho’s instinct is to try and create chances for his teammates. If he’s out wide, he’ll try to cross from the byline or drive towards the edge of the 18-yard box to deliver cutbacks, either to the top of the D or the penalty spot. In other words, he crosses from and into areas that are most likely to result in high-quality chances.

For United, this will be enhanced by the presence of Edinson Cavani up front. The Uruguayan is a supreme penalty-box forward and his movement will allow him to profit from Sancho’s cutbacks closer to goal. Even if he isn’t on the end of a cross, he will pin central defenders back to create space at the edge of the area for the likes of Bruno Fernandes or Paul Pogba to feed off of Sancho’s deeper cutbacks.

If Sancho receives the ball more centrally, he tends to play through-balls to split opposition defences and find forwards in behind. With the pace and movement of the Red Devils’ attacking players, this is sure to be a fruitful way for United to attack.

Of course, teams tend to mark Sancho quite tightly given his attacking threat. Consequently, he often receives the ball in congested areas where he can’t make a pass immediately. In these scenarios, the Englishman’s close control comes into play. He is one of the world’s best dribblers, capable of quick shifts of direction with the ball at feet to weave his way through opposition challenges.

This allows him to unlock defences almost single-handedly, gliding past players to arrive in the penalty area with time and space to pass or shoot. Combined with his aforementioned passing and his capacity to make the right decision at the right time, Sancho’s ball-carrying is what elevates him from a stagnant playmaker to a dynamic creator.

For United, Sancho’s ball-carrying will be a welcome asset in their efforts to unlock low-blocks, something they continue to struggle with. It will also be useful against teams that press them higher, as he can drop deeper to receive the ball to turn and dribble, breaking the press himself rather than relying on United’s defenders and midfielders.

Sancho’s ball-carrying also means he carries a unique attacking gravity on the pitch, attracting multiple players as they look to stop him. Given how reliant United are on their left-hand side for attacking productivity, this will stretch opposition defences more as they will have to commit more men to the right-hand side to deal with Sancho. That will then create more space for the likes of Rashford, Pogba, and Luke Shaw on the left to exploit.

Sancho may take some time to adapt to the Premier League. The immaculate timing of actions and decision-making he showed in the Bundesliga is contingent on his ability to judge the pace of the game, which is considerably faster in England than in Germany. But that’s a minor risk because even if all of Sancho’s attacking traits don’t translate immediately for Manchester United, the attributes that do will still make him a lethal attacking force.

There are also some reservations about whether Aaron Wan-Bissaka is a sufficiently attack-minded fullback to support Sancho in the final third. But Wan-Bissaka has improved tremendously in his attacking game, and all signs point to that continuing in the future.

Further, as Carl Anka pointed out in an article for the Athletic, the former Crystal Palace defender’s issue isn’t that he doesn’t occupy advanced positions down the right-hand side. It’s that United don’t look for him enough. For Sancho, Wan-Bissaka should provide enough attacking support to ensure he can succeed.

Jadon Sancho will undoubtedly be one of the signings of the window. And if United can strengthen other areas before the transfer market closes, they may be able to seriously contend for the Premier League title next season.

Read Also – France are out, but Euro 2020 has shown what Man United must extract from Paul Pogba