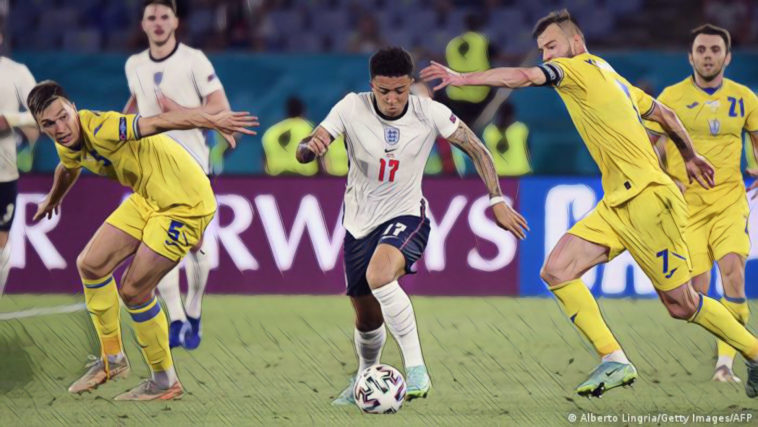 Former Manchester United defender Rio Ferdinand was left purring at an ‘unplayable’ Jadon Sancho display against Ukraine, ahead of his move to Old Trafford.

The Borussia Dortmund man had been a notable absentee from England’s first four games of Euro 2020, before being thrust into the action for the quarter-final clash with Andriy Shevchenko’ side, the 21-year-old earning a start in place of the injured Bukayo Saka.

Despite not providing a goal nor an assist in the Three Lions eventual 4-0 thrashing, the former Manchester City was a standout performer nonetheless, showcasing the breathtaking skill and trickery that has seen him develop into such a star in the Bundesliga.

That stunning display comes at the end of a special week for the forward, after it was announced that he is set to join the Red Devils in the coming weeks on a £73m deal, pending a medical that will take place after his European Championship involvement.

That switch will bring to an end a long, drawn-out transfer saga involving the England international, the deal having previously stalled last summer after United failed to match the German club’s strict demands.

Speaking following the victory in Rome, former Man Utd defender Rio Ferdinand was hugely impressed with his old clubs latest addition, saying that he often ‘mesmerises defenders’ and can be often be ‘unplayable’.

“Yes, they have [got something special],” he told the BBC.

“This isn’t a surprise, this isn’t something that I would just think, ‘This is what he does, is it?’

“This is what German fans have been seeing for three years in the Bundesliga.

“He dances past these guys like he’s on the dancefloor, moves and they don’t know where they are.

“He’s got that; he mesmerises defenders; he’s got a confidence and balance that is very rarely seen.

“And once he gets up to speed, this kid, he’s unplayable – and at the end of that, normally, there’s a pass and a weighted pass and decision making that goes beyond his years.”