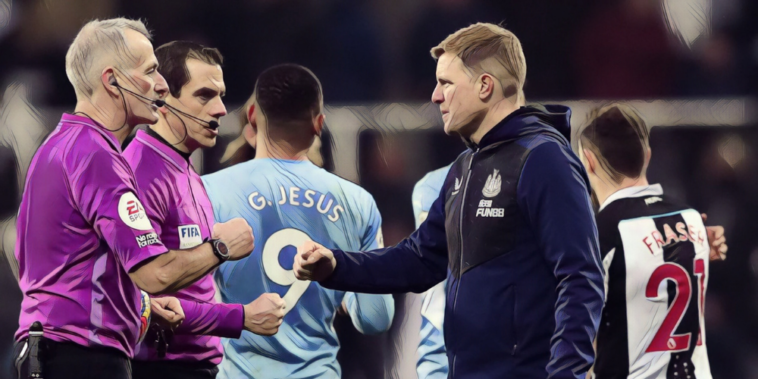 Newcastle will make a ‘formal complaint’ about the standard of refereeing in the Premier League following controversial decisions in recent fixtures.

The Magpies will register a complaint about refereeing standards in the Premier League after being left ‘incensed’ by recent referee decisions during defeats to Leicester, Liverpool and Manchester City.

Newcastle are mired in the Premier League’s bottom three at present and the Telegraph has revealed that the club will complain about several decisions, the first of which was a contentious penalty awarded to Leicester with the game goalless at the King Power Stadium.

James Maddison appeared to initiate the contact for the spot-kick, as the Foxes opened the scoring from the spot on their way to a 4-0 win. Newcastle have also been left disappointed with Liverpool’s equalising goal on December 16, as play was allowed to continue for the home side despite Isaac Hayden being on the ground with a head injury.

🗣 "There's been one in every game and for me they're clear decisions, the goalkeeper is out of control."

Eddie Howe says the penalty claim had a big barring on the game and struggles to understand why VAR didn't give it pic.twitter.com/T311HlPFcE

There was also outrage at not being awarded a penalty against Manchester City on Sunday, as Ederson wiped out Ryan Fraser inside the area, failing to claim the ball as teammate Joao Cancelo had taken it away.

There has been a feeling from supporters on social media over an agenda against Newcastle, following the club’s controversial Saudi-backed takeover earlier this season, with the Magpies having been catapulted into the financial elite.

Whilst those suggestions are fan-led conspiracy, Newcastle will seek answers from officials over a series of decisions which have contributed towards their precarious situation in the relegation places.

Aside from Newcastle’s grievances, there were plenty of question marks surrounding the refereeing performance of Paul Tierney during Tottenham’s 2-2 draw with Liverpool on Sunday, with several decisions leaving Jurgen Klopp incensed.

I’m not a Newcastle fan, but was truly shocked when Edinson came charging and went no where near the ball but at Fracer to knock him completely. Fracer could have launched for an opportunity when keeper and defender lost the ball. It should have been a penalty.
Another incident when Jesus clearly pushed the right back out of the field but no fault or card given. Many controversial decisions by referee favouring Man City.