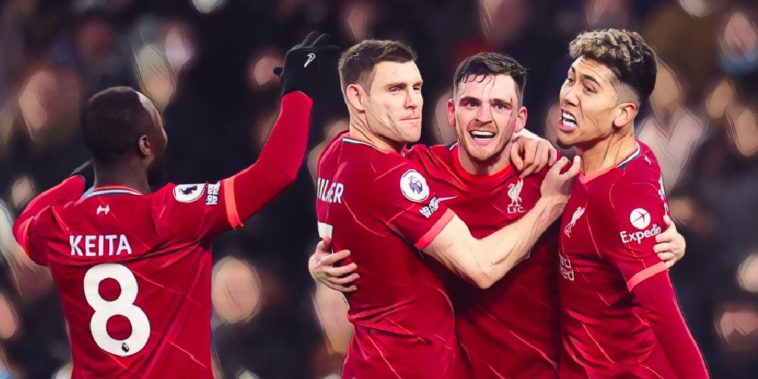 Liverpool slipped three points behind Manchester City in the Premier League title race after being held to a hugely entertaining 2-2 draw against Tottenham.

Spurs came into the game on the back of a prolonged break due to the Coronavirus outbreak that ripped through their squad, though they started positively and took the lead in the 13th minute.

After Harry Winks had won the ball back in midfield, Tanguy Ndombele slipped a well-weighted through ball into the path of Harry Kane, with the England striker showing superb sharpness as he fired low across Alisson to give the hosts the lead – just his second Premier League goal of the season.

Heung Min Son and Dele Alli both spurned very presentable opportunities to extend their lead within the opening half-an-hour in what was an entertaining and end-to-end opening.

Those missed chances would come back to bite Spurs 10 minutes before the interval, Andrew Robertson seizing upon a loose touch in the box before standing up an inviting cross that was dispatched by the head of Diogo Jota.

The second half would continue to be as entertaining as the first, and 24 minutes after the interval, Liverpool would take the lead. Mohamed Salah’s cross found its way to Trent Alexander-Arnold at the back post whose drilled effort was headed home from close range by Andrew Robertson.

Heung Min Son would however draw the sides level once more just five minutes later, Harry Winks playing a ball out of midfield, with the South Korean racing in behind the Liverpool defence, and taking advantage of a mistake from Alisson to roll the ball into an empty net.

Almost immediately after the restart, Liverpool would be reduced to 10 men after goalscorer Robertson took a wild swipe at fellow full-back Emerson Royal, and after being initially given a yellow card, it would be upgraded to red after a VAR review.

Both had chances to score more in the closing stages, but had to settle for a point in what was a hugely entertaining encounter and speaking afterwards, Jurgen Klopp said Spurs ‘looked fresher’ in the second half.

“I saw a big fight from my side. The first half was a good game from my team. The second half, not exactly as good because we felt the intensity of last few weeks and the opponent looked like they had finished warming up. They looked fresher.

“Scoring the second great. Conceding not so much.

“There were a lot of other things that were pretty influential to the game but some of these questions it is better to ask Mr Tierney.”

There was a moment of controversy in the first half as Harry Kane was handed a yellow card after wiping out Robertson with a sliding tackle, and Klopp said he felt the England skipper should have been shown a straight red, questioning referee Paul Tierney.

Should Harry Kane have been sent off?
Should Liverpool have had a penalty?

“Yes definitely. You can give Robbo a red card. It is not the smartest challenge but that is definitely a red card. No doubt about it. His leg was in the air, it was pure coincidence. Harry cannot judge it. If Robbo’s leg is on the ground it is a broken leg.

“We have a VAR sitting there and he thinks have a look again at Robertson again. Fine that’s what he is there for. But what did he do in that situation? And then there is the penalty situation with Diogo Jota.

“Mr Tierney told me Diogo [Jota] stops on purpose because he wants the foul. First and foremost if you want to shoot you have to stop because you cannot do both.

“It is always helpful when you play football yourself. When you see the situation back (Diogo Jota’s penalty appeal), the VAR is there. Why is he stopping? I don’t understand. The draw is fine. We are not crazy enough to think we cannot draw at Tottenham but these situations are crucial.

“I have no idea what his [referee Paul Tierney] problem is with me.

“We have our complete midfield out, the best centre half in the world… We lose our captain on matchday so you cannot expect to play the best football game of the season. You have to fight and that’s what the boys did.

“But just an objective ref who sees the situations and judges them. He told me he thinks he stops on purpose. It is incredible. He had the best spot on the pitch and doesn’t give it. You will have to ask him what his problem is with me.”

Next up for Liverpool is a Carabao Cup quarter final clash against Leicester, and the German aired his displeasure at the fixture scheduling.

“We play now on Wednesday, Sunday and Tuesday. That is impossible. We do not have the players. We could maybe have another case or two. We have to think about it, we cannot just push it all through.

“First of all take away the second semi-final of the Carabao Cup. Just play once, wherever you play it I don’t care. The 26th and 28th of December is really not possible. We would prefer to play but we need some help. If we carry on we cannot carry on as usual.

“If we don’t play any more and have a break I am fine. But I know the problem. When do you want to play the games. It is not that easy to fit them in. We said before Coronavirus that it was a bit busy and now it gives us a proper punch.”