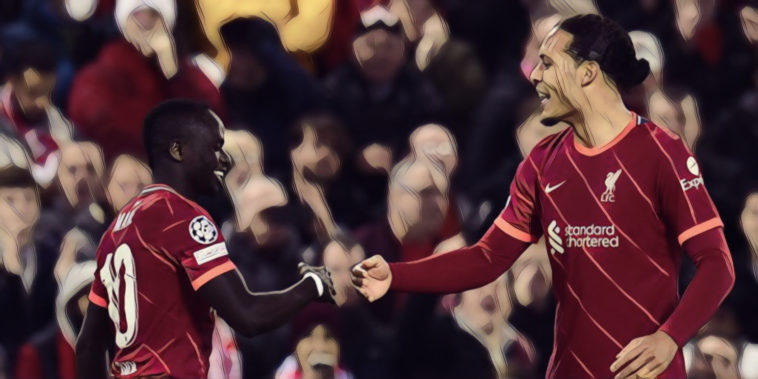 Liverpool maintained their 100% record and qualified for the knockout stage of the Champions League by beating Atletico Madrid 2-0 tonight.

Clashes between this pair of Champions League heavyweights have rarely disappointed in recent times, and tonight’s encounter started at a frenetic pace under the lights at Anfield.

Diego Simeone’s men started to struggle to contain a Reds side full of energy and on 21 minutes the home side would find themselves two ahead. Alexander-Arnold would once again be the provider although in more fortunate circumstances than his first assist after Sadio Mane flicked home a goal bound shot that would have been a routine stop for Jan Oblak.

Things would go from bad to worse for Atletico before half-time when Brazilian defender Felipe was shown a straight red for a combination of a tackle and dissent.

Former Red Luis Suarez thought he had pulled one back 15 minutes into the second period, but it was ruled out for an offside against Jose Maria Gimenez in the build up.

In the end Liverpool saw the game out relatively comfortably, with the only real surprise that they didn’t score more goals to ram home their superiority.

Speaking afterwards, Jurgen Klopp was delighted with his sides performance and their progression to the knockout stages.

“We scored the goals in the right moments. They were much more on the front-foot with how they started than the home game but we started well. They were fantastic finishes as well, especially Sadio Mane. With the red card, well, you don’t like that, you don’t want to play against 10 men but in the end it’s 2-0 and it was a great night.

“The referee was [in control] but I really hate the moment when I had to take off Sadio Mane. You could see that every challenge in the air, you don’t know what could happen. I didn’t like it but in the end, you have to do it.

“You earn a lot of money to win Champions League games! The first target was to get through this group. But we did it with two games to go. What can we do? We will have to see. I didn’t expect we would be through after four games but the boys did it and it’s really well deserved.”

Next up for Liverpool is a trip to the London Stadium to face David Moyes West Ham this Sunday.