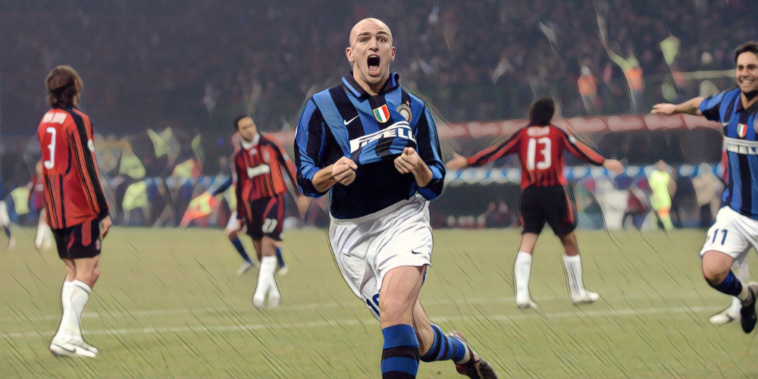 Our Midfield Magicians series has ran through football’s history to celebrate some of the finest footballers of their respective generations, players capable of producing moments others can not even envisage.

Whilst those who create the impossible often dominate the headlines, perhaps the key to being a true magician in boasting a vast array of tricks.

For Esteban Cambiasso, his party piece was often appearing in the right place at the right time.

The lasting memories of Cambiasso have followed a similar narrative to his career as a player. Appreciated, no doubt, but often less celebrated than those further forward who more often dominate the limelight.

Born in Buenos Aires, it took time before football became the player’s passion, first finding fulfilment in following his father’s devotion to basketball, before it became apparent his strengths lay in his feet.

He was inducted into the fabled youth system of Argentinos Juniors, where – as common for South American prospects – predictable interest soon arrived from the opposite side of the Atlantic.

Real Madrid won the race for the midfielder’s signature and signed a teenage Cambiasso alongside his brother, Nicolas, in 1996, the Spanish-speaking environment of Los Blancos deemed the best fit.

“A few months before I had also looked at Ajax but the Dutch culture was so different from Argentina that my family and I were scared,” he later told Marca in an interview. “I made the decision to follow a dream, Real Madrid.”

He featured for Real Madrid’s Castilla side across two seasons, but with his pathway to first-team football blocked and feeling unfulfilled, returned to Argentina to sign for Independiente.

The precocity Cambiasso had showed during his formative years was rewarded with senior minutes back in his homeland, whilst he began to make his mark internationally as part of Argentina’s victorious side at the 1997 FIFA World Youth Championship.

Featuring in a talented team alongside names such as Pablo Aimar and Juan Roman Riquelme, the youthful Argentine contingent claimed the trophy in Malaysia, eliminating an England side containing Michael Owen and Jamie Carragher in the last 16.

Cambiasso proved pivotal to the triumph, scoring the equalising goal as José Pékerman’s side came from behind to beat Uruguay in the final.

Predicted to make an impression in Europe from an early age, it came as little surprise when Real Madrid returned for his services a second time, signing Cambiasso after he spent a single season as the leading light in River Plate’s midfield.

Cambiasso’s second stint in Spain began brightly with UEFA Super Cup and Intercontinental Cup success, but his return coincided with a revolution at the Bernabeu that prioritised glitz over graft and superstars over stability.

Alongside Claude Makelele in the Real Madrid midfield, the duo became symbolic of Florentino Perez’s neglect of balance and both exited within 12 months of each other as the Galactico-crazed president overlooked their contribution.

Inter Milan came calling and secured the signing of Cambiasso on a free transfer, a deal that would represent one of the Nerazzurri’s greatest transfer dealings.

Cambiasso’s ancestral claim to an Italian passport allowed the midfielder to join a strong Argentine contingent at the San Siro, establishing himself as an integral figure in an Inter side that soon became the division’s dominant force.

The midfielder brought brains and bite to the Inter engine room, possessing a left foot that simultaneously designed and disrupted attacking moves.

Whenever gaps appeared Cambiasso would be there to fill them; combative, consistent and cultured.

Perhaps the greatest example of Cambiasso’s ability to unite a successful side came during the 2006 World Cup, scoring one of the tournament’s greatest goals with a 24-pass move in a 6-0 thrashing of Serbia.

One of the great team goals in World Cup history 👌

Under the watchful eye of José Pékerman – who had overseen that World Youth Championship success almost a decade earlier and schooled the likes of Cambiasso, Riquelme and Aimar in possession-based aesthetic football – Argentina scored a picturebook goal, with Cambiasso involved from almost start to finish in a free-flowing move.

That team, with Riquelme roaming and Cambiasso covering, was the closest the latter came to success with La Albiceleste, with the midfielder missing the decisive penalty kick as Argentina exited in the quarter-finals to Germany.

At club level the aftermath of the Calciopoli match-fixing scandal saw Inter become rulers of Serie A, their grasp on the Scudetto unbreakable as five league titles arrived in succession.

Inter’s success reached new levels after Jose Mourinho was handed the baton from Roberto Mancini, as the ‘Special One’ oversaw arguably the most memorable season in Italian football history.

Mourinho has often cultivated an ‘us against the world’ philosophy during his managerial career and his Inter Milan side adopted that mantra, whilst his signings of Diego Milito, Thiago Motta, Wesley Sneijder, Samuel Eto’o and Lucio ahead of that 2009/10 season built a formidable machine.

Inter edged Roma to the league title and beat the same opposition to claim the Coppa Italia, but it was in Europe where Mourinho’s side wrote their legend.

Cambiasso scored the decisive first-leg winner as Chelsea were beaten in the last 16, before progressing to the semi-finals after defeating CSKA Moscow in the last eight.

Barcelona – reigning European champions after treble success the previous season – awaited in the last four, with both legs resulting in a classic Champions League tie.

Inter came from behind to win the first leg at the San Siro, a clinic in counter-attacking football with Cambiasso screening and scanning at the base of the midfield, his anchor role instrumental in nullifying the threat of compatriot Lionel Messi.

He was prominent once more as 10-man Inter held on in the second leg to progress to the final, providing the assurance that Mourinho’s men needed to conquer the continent, a first European Cup in 45 years arriving after Bayern Munich were beaten in the final.

The treble success ended an era as Mourinho departed for Real Madrid, with the resulting seasons proving one of demise after a golden period in Inter’s history.

Cambiasso remained a stalwart and leader as the Nerazzurri embarked on period of managerial upheaval, before calling time on his career with the club after 431 appearance and 14 major trophies in 2014.

Even as his career reached its twilight he decided for one more challenge outside his comfort zone, signing for Leicester City following the Foxes’ promotion to the Premier League.

For an ageing midfielder with over a decade of top-level football in his legs, the move to English football caught many off-guard but it proved an unforgettable venture.

Leicester began the season in poor form- a barnstorming 5-3 win against Manchester United in which Cambiasso scored aside – and as Christmas arrived were rooted to the foot of the division – often the kiss of death for sides seeking survival.

Nigel Pearson’s side remained bottom until early April, only for an unthinkable late-season revival to catapult the Foxes away from danger with Cambiasso at the heart of their success.

The midfielder used every ounce of his experience and drive to uplift less talented players around him, his crucial goal against West Ham sparking a resurgence that saw Leicester win seven of their final nine games to survive.

It was a run of momentum that led to the Foxes’ improbable coronation as Premier League champions a season later, though Cambiasso had not stayed for their shock success after leaving the King Power – cult status in tact – for a final farewell at Olympiakos.

Two titles followed in Greece to cap a stellar career of copious silverware, retiring from the game with nine league titles amongst his vast collection of honours.

Individual acclaim often escaped one of the great midfield players of his generation, but that was only representative of Cambiasso the player, a conduit of trophy-winning sides who raised the levels of those around him.