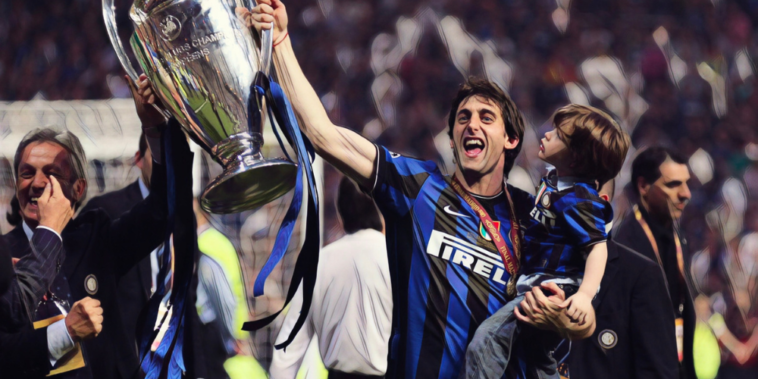 Inter Milan’s treble success was arguably the pinnacle of Jose Mourinho’s management. Even in a coaching career of such achievement, his transformation of the Nerazzurri into Europe’s finest force was a masterpiece.

Mourinho might have taken the plaudits from the dugout, but on the pitch there were few who contributed more than Diego Milito. Outside of Milan, Milito’s career was spent mostly at modest clubs, perhaps unfairly detracting from his status as one of the noughties greatest goalscorers.

Born in Argentina, just ten miles south of Buenos Aires, his football career began in the colours of Racing Club. Milito and his younger brother, Gabriel, were both talented prospects but began their ascent to the summit of the world game in rival colours.

Early meetings between the two saw them come in direct competition domestically, on opposing sides of the Avellaneda derby as Racing took on Independiente. With Diego a centre-forward and Gabriel positioned in central defence, the two went head-to-head on the pitch with family ties often forgotten.

Their talents soon saw European interest arrive. Diego’s record of 34 goals in 137 appearances for Racing was unexceptional, but it was enough to persuade Genoa to provide him with a chance in Italy.

His two seasons in Genoa proved fruitful, as he scored 33 times in just 59 league appearances. Those goals fired Genoa out of Italy’s second tier with promotion, but allegations that the club had fixed a 3-2 win over Venezia to win the league title saw the club demoted to Serie C.

Unable to keep their best assets following the sanctions, Milito moved to Spain and joined Real Zaragoza on a two-season loan, one made permanent after a prolific period in La Liga.

At La Romareda, Milito found his form in a major European league. Now a teammate of sibling Gabriel following his move to the Spanish side in 2003, a steady stream of goals saw Milito’s reputation rocket.

He scored 53 goals in just 108 league appearances for Los maños and finished as runner-up to Ruud van Nistelrooy for the Pichichi Trophy in 2006/07. Despite Milito’s goals and a sixth-place finish that season, disaster struck the following campaign as Zaragoza were relegated to the Segunda División.

Diego Milito was one of the 🌍's most prolific strikers in his day! 🇦🇷#LaLigaHistory pic.twitter.com/dSxG7IjVoG

Rather than move on to a leading club, Milito opted to return to a familiar setting. Genoa – now back in Serie A after successive promotions – struck a deal to bring the Argentine back to the Stadio Luigi Ferraris.

His impact was instant as Milito scored a career-best 24 league goals, firing the promoted side to a fifth-place finish and UEFA Cup qualification. In the race for the Capocannoniere award as the league’s leading scorer he fell just one short, as Zlatan Ibrahimovic scored a final day double to take the trophy.

Unbeknown to Milito at that time, Ibrahimovic’s form would directly impact his own future. Barcelona signed the Swede in a mega-money deal that summer, leaving champions Inter Milan in need of a replacement.

Jose Mourinho had pioneered the move to a lone striker during his successful spell in England and continued with his trusted tactic at Inter. Ibrahimovic’s exit had created a void in the side and despite the considerable compensation of Samuel Eto’o in return – alongside a windfall of €46m – Mourinho sought a new forward.

Choosing power over pace as his weapon of choice, Mourinho made his move for Milito. Granted a long-awaited chance at a European giant, he moved north up Italy’s infamous boot to sign at the San Siro in 2009.

Joining him was Genoa teammate Thiago Motta, while Lucio and Wesley Sneijder also arrived in a recruitment drive that formed the spine of a side on the verge of unchartered achievement.

Milito was now 30, but arguably at the peak of his powers. A spectacular first season in the blue and black reemphasised Mourinho’s faith in ‘Il Principe’.

His first goal came from the spot in the club’s second game of the Serie A season, as Inter thrashed AC Milan 4-0 in the Derby della Madonnina. He netted in each of the following three fixtures as Mourinho’s side racked up wins over Parma, Cagliari and Napoli, with the Nerazzurri the division’s dominant force in the post-Calciopoli era.

Milito ended the season with 22 league goals – again finishing as runner-up for the Capocannoniere – as Inter were crowned champions for fifth straight season. The Argentine was instrumental in the club’s success and quickly became a fan favourite for his work-rate and goalscoring instinct, leading the line of an Inter team that began to snowball with momentum.

Alongside the Scudetto came Coppa Italia success as Inter claimed a domestic double. Having scored the only goal in the win over Siena to secure the Serie A title, he repeated the feat in the cup final as Inter beat Roma 1-0.

The true test for Mourinho’s team however, was in Europe. Despite domestic dominance the Nerazzurri had flattered to deceive on the continent, exiting in the Champions League’s last 16 in three consecutive campaigns.

Reinforced with the steel and skill of their summer recruits, the 2009/10 campaign saw Inter make inroads into the latter stages.

Three consecutive draws to open the group stage had threatened familiar shortcomings before Inter trailed at Dynamo Kyiv in the final stages on matchday four. Milito’s late equaliser brought the teams level, before a dramatic winner from Sneijder finally got the club’s campaign up and running.

Milito continued to come to the fore in the knockout rounds. An early opener against Chelsea helped Mourinho get one over his former side in the last 16, before scoring again as CSKA Moscow were beaten in the quarter-finals.

From the semi-final onward however, Milito wrote his name into club folklore. Defending champions Barcelona arrived at the San Siro in the last four, but were blown apart in a ruthless performance of clinical counter-attack.

Despite falling a goal behind, Inter roared back. Milito was at the heart of it as he set up Sneijder for the equaliser, before teeing up Maicon to give Inter the lead. His header made it 3-1 and saw the Italians take control of the Champions League semi-final.

A Mourinho masterclass in team shape and game-management saw 10-man Inter hold out in the second leg, ensuring a place in the European Cup final for the first time since 1972.

Bayern Munich awaited at the Bernabeu, with both teams chasing a historic treble. In the Spanish capital it was Milito who made his mark, scoring both goals to crown Inter Milan champions of Europe for the first time since back-to-back triumphs in the mid-sixties.

In club football’s biggest game the Argentine produced a defining performance. Bayern’s centre-back pairing of Martín Demichelis and Daniel van Buyten struggled to cope with the forward, who tormented the duo.

His first goal was a demonstration of the ruthless efficiency to his game. Milito headed down Júlio César’s goal-kick to Sneijder, before charging forward to collect the return pass. The finish was exquisite, lifted delicately over Hans-Jorg Butt.

The second was arguably even better. Driving at Van Buyten, he left the Belgian twisted and turned with a fantastic feint, before opening up his body and guiding a shot into the far corner with power and precision.

Milito’s magical season had reached its crescendo in the Champions League. A brilliant brace had crowned Inter as European champions and had taken Milito to 30 goals for the season. Remarkably, his 30 goals came in 28 different games with his final performance one of just two braces for the campaign.

Inter won 22 of those 28 games, drawing four and losing just twice when Milito had scored. A big player had defined the big games and had done so all season long – with 11 match-winning goals.

Winner of the prestigious UEFA Club Footballer of the Year award, he was the focal point of Inter’s greatest season. Their success waned following Mourinho’s exit that summer, but Milito remained until returning to Racing Club in 2014, doing so with a record of 75 goals in 171 games.

Often overlooked given the abundance of Argentine attackers from the same generation, the likes of Lionel Messi, Sergio Aguero, Carlos Tevez and Gonzalo Higuaín have often commanded more of the limelight. Messi aside, Milito’s peak – that stunning 2009/10 campaign of game-changing moments – was as good as anything produced from those aforementioned names,.

Idolised at Inter and a hero in Zaragoza and Genoa, there was arguably no better centre-forward in Europe during the season in which the noughties turned into the 2010s.