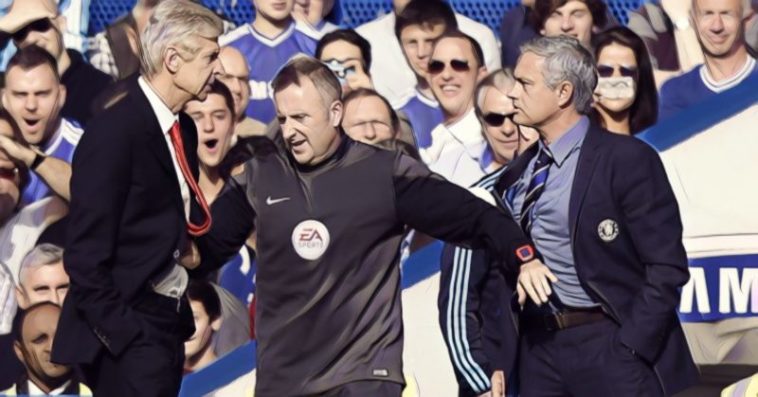 Football’s tribalism has seen the formation of eternal rivalries between clubs in English football, those sharing cities or competing against one another for major silverware in the pressures of the Premier League.

Perhaps rivalries are at their most heated when managers clash, however, the two leaders of their respective clubs showing a visible dislike for their rivals and opposing numbers.

Throughout the Premier League era we have seen some fascinating rivalries between top flight managers, and we’ve decided to revisit some of the very best.

A feud that would lead to one of the most iconic moments in the division’s history, Keegan’s Newcastle were the swashbuckling challengers to the dominance beginning to be asserted by Ferguson’s Manchester United during the nineties.

The height of the rivalry would come during a fascinating title race in 1996, Newcastle racing into a lead at the top of the Premier League before a collapse of catastrophic proportions, Ferguson managing to get firmly under the skin of his opposing number.

The Manchester United manager’s comments that opponents would try harder to beat his side than their title rivals riled Keegan in memorable fashion, the Newcastle boss delivering an impassioned television rant exclaiming he would ‘love it’ if his side pipped United to the championship.

A spectacular late defeat at Liverpool in a Premier League classic would be one of several occasions the Magpies would slip, however, United finishing four points clear at the top before again finishing ahead of their rivals the following season.

Ferguson would become famed for his ‘mind games’ during a glittering career at Old Trafford, never more evident in seeing off the challenge of Keegan’s Newcastle.

Without question the great rivalry of the Premier League era, Arsenal and Manchester United would exchange nine successive league titles between them from 1996 to 2004, the two sides competing for a decade for supremacy in English football.

Wenger’s arrival in north London would prove to be the catalyst for the strongest challenge to United’s dominance of the newly branded Premier League, the Frenchman arriving as a relative unknown but changing the Gunners’ fortunes with his modern methods.

A thrilling FA Cup semi-final in 1999, the ‘Battle of Old Trafford’ and ‘Pizza-gate’ were amongst the most high profile meetings between the bitterest of rivals, two of the elite teams in Premier League history playing out the most intense rivalry the division has seen.

At either side of the divide were the club’s great leaders, rarely refusing an opportunity to take aim at each other and trading insults over several years of fierce competition.

Perhaps the height of their rivalry came during that famous pizza throwing clash in 2004, United ending Arsenal’s record 49-game unbeaten run and sparking a post-match brawl in which food was thrown in the direction of Ferguson.

The Scot described the behaviour of the Arsenal players as ‘the worst thing he had seen in football’, whilst Wenger would hit back furiously at Ferguson.

“Ferguson does what he wants and you [the press] are all down at his feet. He doesn’t interest me and doesn’t matter to me at all. I will never answer to any provocation from him any more,” he said.

“He has lost all sense of reality. He is going out looking for a confrontation, then asking the person he is confronting to apologise.”

The two would mellow as they reached their latter years, but few can forget a rivalry that was fuelled by dislike and respect in equal measure.

After years of domination between Arsenal and Manchester United, Chelsea would emerge as new powerhouses of English football following the billionaire takeover by Roman Abramovich, fronted by a young and charismatic manager by the name of Jose Mourinho.

The west London side would wrestle the title from their city rivals in Mourinho’s first season in charge, before securing back-to-back successes as the Portuguese made his mark in the Premier League.

The two would possess differing approaches to the game, however, philosophies which would see one of the longest running managerial feuds that the Premier League has seen.

Mourinho’s win-at-all-costs mentality was in stark contrast to Wenger’s aesthetically pleasing style, the duo trading barbs over their respective approaches to management as their two sides battled for silverware.

The duo would have numerous run-ins over the years including one famous pitch-side scuffle, whilst Mourinho would famously and bizarrely label Wenger a ‘voyeur’ for his constant remarks regarding Chelsea’s tactical approach.

Insults would continue to exchanged before perhaps Mourinho’s most famous quip in the direction of his rival, labelling Wenger a ‘specialist in failure’ after several seasons without silverware.

Two innovative managers would arrive into English football in the summer of 2004, each having tasted great success on the continent at their respective positions at Valencia and Porto.

Over the course of the next few seasons, the managers would play out some titanic battles as Liverpool and Chelsea went head-to-head for silverware, memorably meeting in two Champions League semi-finals, and the latter stages of both the League and FA Cup.

Whilst the west London side would dominate domestically, much to Mourinho’s frustrations, Liverpool would edge many of their European contests, most memorably with the ‘ghost goal’ that secured the Reds passage to the Champions League final on their way to lifting the trophy in 2005.

“Did the best team win? I don’t think so. In a one-off game maybe they will surprise me and they can do it. In the Premiership the distance between the teams is 45 points over two seasons,” the Portuguese coach said.

Benitez would hit back by aiming a dig at Mourinho’s self-reference as the ‘Special One’, saying
“We have our special ones here, they are our fans,” – later taking a pop at the Chelsea support as the rivalry between the two sides continued to grow.

The dislike for one another would continue outside of the Premier League as Benitez replaced Mourinho as Inter Milan manager, whilst Mourinho would hit out at his rival once more after Benitez won the Europa League during a brief stay as interim manager of Chelsea.

Mourinho, of course, changed his tune somewhat when his Man United side won Europe’s ugly little sister in 2017.

Two managers who are never afraid to make their feelings known, particularly their much publicised dislike for each other.

The rivalry would begin after Manchester United manager Mourinho criticised Conte’s behaviour following a 4-0 defeat at Stamford Bridge, hitting out at the Italian’s exuberant celebrations – Mourinho reportedly accusing Conte of ‘humiliating’ his side.

From there, their rivalry continued in ever increasing bitterness, a series of jibes being exchanged between the feuding coaches.

Mourinho’s list of digs includes referencing acting like a ‘clown on the touchline’ – widely believed to be aimed in the direction of Conte – whilst even aiming a petty and thinly-veiled jibe at the hair transplant undertaken by the former Chelsea boss ahead of his coaching career.

Perhaps the height of their feud came with Mourinho referencing Conte’s suspension for match-fixing, an insult that would leave Conte fuming – having been cleared of any wrongdoing some five years later.

Conte would hit back viscously by branding Mourinho ‘fake’ and a ‘little man’, tensions between the duo having never been greater as the Portuguese publicly took aim at the lowest point of Conte’s career – the mutual dislike remaining amongst the most fierce in modern football despite Conte’s Chelsea exit in 2018.