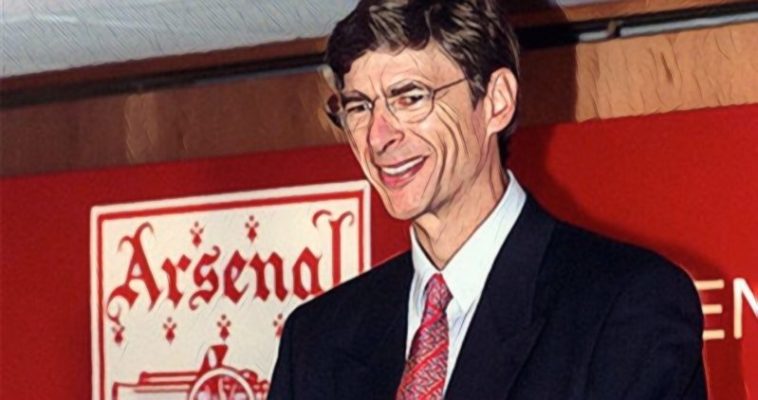 Deep in the bowels of Ewood Park in the Autumn of 1996, Arsenal’s players took their seats in the dressing room at half-time as they awaited the manager’s appraisal of their efforts during the opening 45 minutes of a rather bland clash with Blackburn Rovers.

The Gunners were a goal up courtesy of an early Ian Wright strike but the game was hardly a classic; in fact, the visitors had been on the back foot and were lucky to be ahead at the interval.

This would be the first time they had faced Arsene Wenger during the interval of a competitive match and there must have been some wariness after a lacklustre showing. The Arsenal XI that day was a mix of seasoned pros and big personalities. From Ian Wright to Paul Merson and Tony Adams, this was a formidable dressing room for any manager to tame, let alone a newly appointed outsider plucked from football obscurity.

As everyone waited on their bespectacled head coach to open up and give them what for, an uncomfortable silence started to bloom. The Frenchman sat with his technical team and faced off with his new players. The growing silence was punctuated by bemused glances from the Arsenal squad and even club stalwart and newly promoted assistant manager Pat Rice began to glance at his new boss, unnerved by his calm approach to proceedings.

Little did they know it at the time, but the Arsenal players were getting their first dose of the Frenchman’s zen-like half-time talks. Indeed this was a man who was simply not cut from the same cloth as anything that had come before him and in those heady days of autumn 1996, the wider football community in England seemed to sense that change was afoot with this left of field managerial appointment.

So much has been written, recorded and documented since about how Wenger revolutionized English football. It is impossible to view his arrival in the Premier League as anything other than transformative. The ex-Monaco coach has been rightly credited with radical changes to the way in which clubs approached nutrition, conditioning, training and recruitment.

His arrival marks a watershed moment in so many ways and the staggering success he would go on to have during his first decade in North London marks him as one of the finest managers of the modern era. That this respect and success was quarried from the hardest of granite surfaces makes his story all the more admirable and remarkable.

Back then the Premier League was the domain of tried and tested household managerial names with roots that ran deep into the core of the English game’s trophy laden past.

The 1970s and 1980s had spawned era defining football sides that would go onto dominate the continent as well as their own back yards. From Bob Paisley at Liverpool to Brian Clough at Nottingham Forrest, Tony Barton with Aston Villa and Ipswich Town’s remarkable achievements with Bobby Robson, British managers had nothing to prove to anyone.

This success lingered into the brave new world of the Premier League era with Kenny Dalglish, Alex Ferguson and George Graham winning prizes and plaudits for the work they were doing with some of the biggest football clubs in the land.

Furthermore, the season prior to Wenger’s arrival in English football had culminated in an exhilarating three-way title tussle between Manchester United, Newcastle United and Liverpool, all of whom were finely tuned by British coaches. The national team too had shone under the lights of Euro ’96, with Terry Venables going so close to winning the tournament with an exciting brand of cavalier football.

Framed in this context, it is easy to see how the sneering veneer of British footballing arrogance manifested itself against Wenger. The press had a field day with this quiet, softly-spoken and largely unknown Frenchman who joined Ruud Gullit as only the second overseas coach in the Premier League. Writing in The Observer in August 1996, Jon Henderson perhaps perfectly sums the hostility towards foreign coaches at the time:

“What will Arsène Wenger bring to the party if he signs for Arsenal this week: coaching skills that will make the Gunners fire again, or simply a Christian name which more closely resembles that of his club than any other in football?

Aston Villa’s experiment in the early 1990s with the Czechoslovak intellectual Dr Jo Venglos proved an unqualified failure. Venglos spoke a different language, literally and metaphorically, from his players and so the club replaced him with Ron Atkinson who was perfectly understood when he exhorted a defender to ”give it some wellie”.

There was rampant scepticism on how such an obviously cerebral, quiet-mannered coach could survive in the macho cauldron of English football. Already, Alex Ferguson’s infamous hairdryer treatment was well known, whilst the likes of Ron Atkinson and Kevin Keegan favoured letting their players off the leash and cultivating a laddish atmosphere of banter and pints behind the scenes.

And yet, into all of this, Wenger strode. Emerging from a football backwater the Strasbourg-born manager had been on then Arsenal Vice-Chairman David Dein’s radar since 1989. While others may have had misgivings about Wenger’s suitability to replacing Bruce Rioch and filling George Graham’s big shoes, Dein remained a steadfast champion of the Frenchman’s abilities.

However, the players were not so enthused with their new head honcho. Defensive maestro Martin Keown said his first thought after meeting Wenger was: “Do nice guys win anything?”

Whilst former Gunners captain Tony Adams latter admitted to similarly dismissive thoughts: “He wears glasses and looks more like a school teacher. He is not going to be as good as George Graham.”

Despite the lukewarm reception and snipping cynicism, the Frenchman would slowly instil the changes that would help make him immortal in the red half of North London and beyond. Rather than fleeing from his methodology and attempting to mimic his new contemporaries with their bolshie personalities, he stood fast to what he knew and thought to be right in the fine arts of football management.

On that trip to Lancashire in October 1996, Wenger was in his own way, being as resolute and self-assured as some of the other more flamboyant and bombastic managerial characters in the Premier League.

In staying calm, reflective and quiet the Frenchman allowed his players to take stock of what they had or hadn’t done in the opening half. It was a trait he would largely stick to throughout his managerial career and he would later tell the club’s website:

“When you talk too much nobody knows really what you’re saying. So you keep two, three things (until the end). I was never a great believer that you talk for 15 minutes at half-time. And sometimes I believe the players have to calm down as well, and the players have to communicate with each other…No matter what the manager says, the players know best what’s going on, on the pitch.”

In essence, this was a manager who was prepared to entrust in his players, the navigation to rectifying what was happening out on the pitch. Managers who had come before had largely been inclined to imprint their mantra to the nth degree and instruct their players to do exactly as they were told on the pitch, as well as in training. Half-time team talks for them were mere extensions of their exacting instruction manuals. What Wenger was doing was truly different and from an altogether different playbook.

Here was a marked outsider in a very British league, who, in pausing for a few moments of reflective half-time silence, was setting out his managerial stall from the very beginning; the Premier League would never be the same.