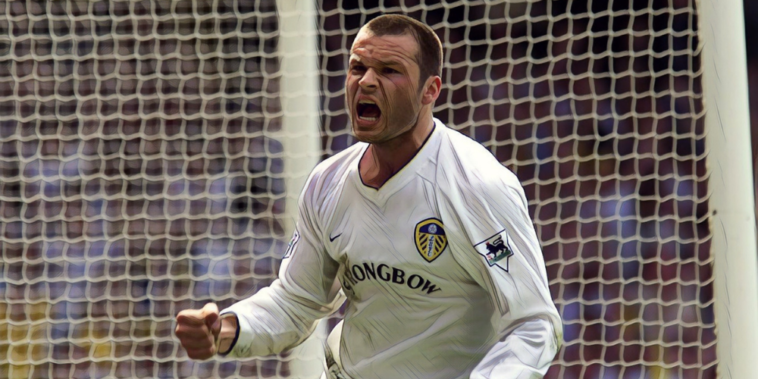 Mark Viduka might not be the first forward that springs to mind when discussing the Premier League’s finest, but as the nineties turned into the noughties he was undoubtedly among the best in English football.

Viduka’s best seasons came in the colours of Leeds United, having arrived from north of the border with the task of spearheading a side with grand ambitions.

Leeds were on the rise under David O’Leary, but needed a presence to lead their exciting but inexperienced side. Viduka certainly fitted the brief.

Viduka’s path to Elland Road had began in Melbourne, Australia, as the son of Croatian immigrants who had headed to the southern hemisphere to escape conflicts and anti-Croatian sentiment in Yugoslavia.

He signed for Melbourne Knights as a teenager, a side founded by Croatian immigrants in the western suburbs and had previously operated under the name Melbourne Croatia.

He moved to Europe in search of opportunity and signed for Dinamo Zagreb, starring during a golden era for the side during his three-and-a-half seasons in his father’s homeland.

The Scottish side were in search of a partner for Henrik Larsson and viewed Viduka as the ideal fit, a powerful player with the size and subtly to bring the best from the prolific Swede.

Their time together was limited due to a serious injury sustained by Larsson during the 1999/2000 campaign, though in his absence Viduka emerged as the league’s leading light.

Mark Viduka was certainly prolific for @CelticFC! Celtic fans, is this your favourite goal from Viduka? #AustraliaDay 🇦🇺 pic.twitter.com/FnMcoK36z0

He scored 25 goals in 27 league appearances for Celtic, performances which earned him both the Scottish Golden Boot and the SPL Player of the Year Award despite the club finishing a huge 21 points behind Rangers.

Celtic had struggled to compete with their Old Firm rivals domestically, though won the Scottish League Cup with Viduka leading the line. He had, however, reportedly refused to come out for the second half of the club’s infamous Scottish Cup exit to Inverness Caledonian Thistle.

In a short spell Viduka had proven himself as a cut above Scotland’s finest and Leeds secured a £6m deal to bring the forward to the Premier League.

An improving team were in need of a focal point and Viduka soon became a fans’ favourite. His mix of hulking strength and deceptively nimble footwork made the summer signing an instant hit at Elland Road, as he complimented an exciting attacking line-up that included Alan Smith and compatriot Harry Kewell among its options.

After an initial slow start his season burst into life with a brace in a 4-3 win over Tottenham, before adding another two goals as Charlton were beaten in west Yorkshire.

As November arrived, he delivered one of the most memorable individual performances in Premier League history. Leeds had edged Liverpool in the race for Champions League qualification the previous season and both teams were expected to challenge once again.

Their autumn meeting proved a Premier League classic, a pulsating end-to-end clash in which Viduka stole the show. The Australian scored all four goals as Leeds won 4-3, with the manner of his finishing announcing him as one of the Premier League’s most feared forwards.

Each time Liverpool – who led twice, including 2-0 after just 18 minutes – threatened to escape, Viduka found an answer.

He haul included two delightful chipped efforts, demonstrating the impudence in his game, and a hat-trick goal that saw him spin gracefully inside the area in a moment which defied his burly frame.

Mark Viduka had a day to remember #OnThisDay in 2000 as Leeds put 4️⃣ past Liverpool at Elland Road pic.twitter.com/HtQLOvigx2

“It was an incredible one-man performance,” former Leeds goalkeeper Paul Robinson told the Independent. “The way Viduka dragged everybody up by the bootlaces.

“Liverpool were title challengers then, and we were just the new kids on the block. There was always a Leeds-Liverpool rivalry, but that was becoming more significant because we were a young, emerging team. People were taking notice of us.

“Viduka was one of the most laidback men, but with an edge. You had to be a good man-manager to get the best out of him, else you’d lose him. He’d be late for his own funeral. There was no point in fining him for turning up late. So you make a joke and accept that’s how he is. Then he pops up and scores four on the Saturday. That was the reward you got for managing him properly.”

Viduka ended the season as Leeds’ leading scorer with 22 goals in all competitions, including four during the club’s memorable run to the Champions League semi-finals. His back-heeled assist in a famous 1-0 win at Lazio was among the highlights of a European season still talked about with wide-eyed nostalgia.

As he battled centre-backs the ball would stick adhesively at his feet, as if his sizeable frame possessed its own gravitational pull, before often being released to the willing runners who flocked forward to join him.

Viduka led Leeds’ goalscoring charts in four consecutive campaigns, including a brilliant 2002/03 season in which he and Kewell almost singlehandedly saved a struggling side from relegation.

The club’s financial implosion was beginning to accelerate a rapid decline, though a late-season run of goals helped keep Leeds in the league for another season.

Viduka scored 14 goals across the final 10 fixtures of the campaign, including a hat-trick in a 6-1 thrashing of Charlton and a late winner at Highbury that ended the title hopes of defending champions Arsenal.

He was a constant menacing presence for the highs and lows at Leeds in the early noughties and remained loyal despite the hastening exits until relegation from the Premier League was confirmed in 2004.

Despite past interest from England and Europe’s elite, he moved to a Middlesbrough side looking to build on winning a first-ever major trophy with League Cup success the previous season.

His first season was marred with fitness problems, but the following campaigns proved fruitful as Viduka remained an excellent option on Teeside. Forming a fine partnership with another ex-Leeds forward in Jimmy Floyd Hasselbaink, the duo helped Steve McClaren’s side to the 2006 UEFA Cup final.

Viduka was at the centre of a captivating European run that saw Middlesbrough overturn three-goal deficits in the quarter-finals and semi-finals, before finding the showpiece with Sevilla a bridge too far.

He scored 19 goals in all competitions during his third and final season in the North East, his most prolific campaign at the Riverside.

Viduka signed for Newcastle on a free transfer and helped save the Magpies from relegation during his first season, though a second injury-plagued campaign resulted in the club dropping into the Championship.

It was a sad end to the Premier League career of Viduka, who during a decade in England had cemented his status as one of Australia’s finest footballing exports.

On the international stage he had helped the Socceroos overcome decades of disappointment, securing qualification for the 2006 World Cup in Germany.

Australia had struggled to overcome the challenge of thrashing Oceanic minnows before meeting one of South America’s best in the World Cup play-offs. After agonising near misses in 1997 and 2001, a Viduka-led Australia beat Uruguay on penalties to reach the tournament for the first time since 1974.

Mark Viduka scored our second ever goal at the AFC Asian Cup back in 2007 with this brilliant header.

He captained the side to the last 16 in a positive tournament for the Socceroos, the highlight of an international career that comprised of 43 caps and 11 goals.

Post-football, Viduka has departed to an anonymous existence, running a coffee shop in Zagreb. The forward, who once struck fear into opposition centre-backs under the bright lights of Premier League stadiums, has chosen to fade away from the game’s immediate consciousness.

The memories of peak Viduka remain vivid however, a footballer who was both brawn and brains but with a touch of the balletic, a potent combination for a Premier League number nine.