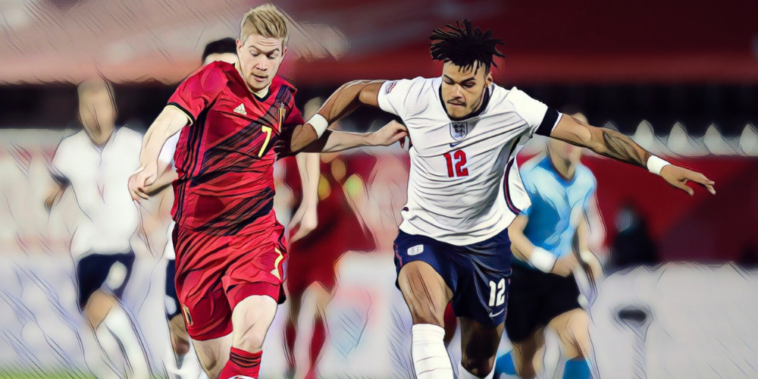 Tyrone Mings admits England need to be ‘streetwise’ in the ways of the ‘dark arts’ as the Three Lions prepare to begin their Euro 2020 campaign.

England head into this summer’s major tournament as one of the favourites to lift the trophy, with Gareth Southgate’s side facing Croatia in their group opener on Sunday, before clashes with Scotland and the Czech Republic.

The Three Lions are bidding to improve on a World Cup semi-final appearance three years ago and end a 55-year wait for major tournament success, and Mings believes England must be ‘streetwise’ if they are to reach the latter stages.

The Aston Villa defender was fortunate to escape unpunished following an aggressive off-the-ball block on Sasa Kalajdzic during England’s 1-0 friendly win over Austria, an incident that would likely have been penalised had VAR been in use.

Mings, however, believes the ‘dark arts’ are a part of international football and says England must use them to their advantage at Euro 2020.

“Football is very soft these days, you cannot get away with much,” he said at a press conference.

“As a defender, I have done that many times in my career. When a cross is about to come in, block the striker. That is not against the rules. But that one [on Kalajdzic] there was probably too aggressive.

“But being streetwise is a huge part of the game. You look at other nations and they are masters at the dark arts – staying on the floor for longer than needed, delaying restarts.

“Being streetwise is also sometimes what gets you over the edge because it winds up the opposition and breaks up their flow and their rhythm.”

Mings was asked if he considered himself ‘lucky’ to have escaped punishment from the incident, insisting he was aware that there was no VAR in play.

“Not lucky, no, because I knew there wasn’t VAR,” he insisted.

Mings also responded sharply to comments that he would have been sent off had the same foul occurred during a match at this summer’s Euros, hitting back at that hypothetical statement.

“Yeah but it wasn’t, was it,” he hit back. “We can go back through many different occasions in my career and you could say if there was VAR in that game, I would have got sent off.”

Mings will be in line to start in England’s group opener against Croatia with Harry Maguire having only just returned to training following an ankle injury, though the Aston Villa defender insisted that there is no additional ‘spotlight’ on his performances.

“[The spotlight is] not on me. It’s on Harry and whether or not he will play,” he said.

“If he is not fit and somebody else plays, we will take that as it comes on the day and prepare accordingly.

“But I don’t feel there is more of a spotlight on me because I don’t know if I would play even if he were not fit. I am just in the shadows trying to help prepare as much as possible.”

Read also – Five of the best players from Euro ’96