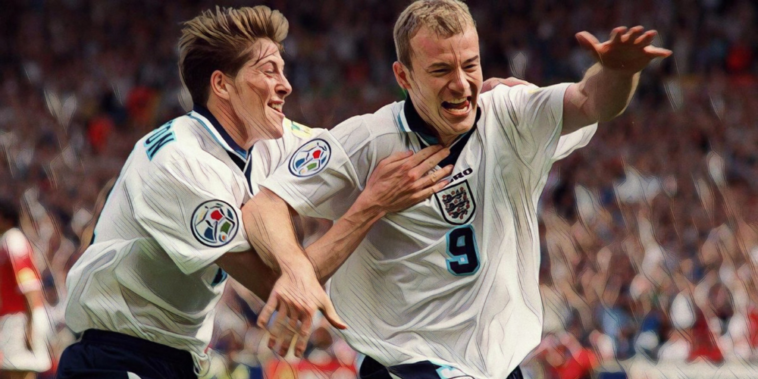 The summer that football came home, well, sort of. England hosted the European Championship in what proved to be a festival of football, the host nation reaching the semi-finals before the inevitability of losing on penalties to the Germans.

England’s venture to the last four brought the feel-good factor for the hosts, as Baddiel and Skinner sang along with the Lightning Seeds for the soundtrack to a tournament that evokes huge nostalgia for football fans of the mid-nineties.

The hosts aside, the Czech Republic and Croatia both made fine impressions in their first appearances in the tournament as independent nations, the former going all the way to the final before Golden Goal agony at Wembley.

As we prepare for this summer’s European Championship, we revisit some of the stars of previous editions.

Here are five of the best players from Euro ’96.

It’s easy to forget that Alan Shearer’s place in the England side was under threat heading into the tournament, the forward having gone 12 matches and 21 months without a goal at international level.

Shearer was the Premier League’s leading centre-forward during the mid-nineties and had won the division’s Golden Boot in each of the past two campaigns, enough to ensure that Terry Venables never lost faith in his first-choice number nine.

Venables’ faith was rewarded in stunning style as Shearer emerged as one of the players of the tournament, finishing with five goals to finish as the leading scorer to win the Golden Boot.

Shearer opened the scoring after just 22 minutes in England’s opening group game against Switzerland, before netting once more as the Three Lions beat Scotland 2-0 in a game most remembered for Paul Gascoigne’s sublime piece of genius to double the lead.

The highlight of England’s run came in their third group game with a 4-1 thrashing of a Netherlands side amongst the pre-tournament favourites, Shearer and Teddy Sheringham each scoring twice as the Dutch were dismantled at Wembley.

Shearer netted in the shoot-out as Spain were edged out on penalties following a goalless draw in the last eight, before scoring after just three minutes against Germany in the semi-final as hopes truly kicked in that the hosts could end 30 years of hurt to lift the trophy.

Alas, it was not to be as England were eliminated on penalties, but Shearer’s performances silenced the critics as he restated his case as the game’s best number nine.

He joined Newcastle in a world-record £15m deal that same summer and finished third for both the Ballon d’Or and FIFA World Player of the Year accolades.

The man who beat Shearer to the Ballon d’Or, Matthias Sammer became just the second defender in history to win the award after guiding Germany to victory at Euro ’96.

Sammer was the player his side was built around after being swapped from a midfield position into a sweeper role, a Franz Beckenbauer incarnate who followed in his compatriot’s illustrious footsteps by winning the game’s greatest individual honour.

Sammer had been named as Germany’s Footballer of the Year in consecutive seasons leading up to the tournament, but Euro ’96 was where he reached his zenith as he guided a resolute German side to success.

The libero was central to his side’s performances and excelled in the deeper defensive role, helping Germany come through the group stages comfortably without conceding a single goal, scoring in a 3-0 win over Russia.

Sammer’s performances reached a new level in the knockout rounds and he was imperious in the victory over an exciting Croatia side in the quarter-finals, scoring the winner in a bruising encounter to book the unfancied German’s place in the last four.

After overcoming old rivals and hosts England on penalties in the semi-final, he defended superbly in another outstanding performance as Oliver Bierhoff’s extra-time goal secured the trophy against the Czech Republic at Wembley.

Sammer was named as the Player of the Tournament for his showings, before claiming the Ballon d’Or ahead of Ronaldo and Shearer to cap a remarkable year of success.

Tournament debutants Czech Republic stole the headlines by marching all the way to the final, their talented team catching the eye of Europe’s elite with names such as Pavel Nedved and Patrick Berger rising to prominence.

Arguably the star name in the side was Karel Poborsky, the floppy-haired midfielder at the centre of the Czech’s success, bouncing back from an opening defeat to Germany to progress to the knockout stages, victory over Italy ensuring their passage on the head-to-head ruling.

An exciting side got better as the tournament progressed and eliminated Portugal’s ‘Golden Generation’ in the last eight, Poborsky proving the match-winner with a moment of genius.

The winger picked up the ball in a central area with four Portuguese defenders in close proximity, weaving and bundling his way past a succession of challenges to find himself in the penalty area.

Spotting Vitor Baia off his line, Poborsky lifts an audacious scooped effort up and over the bewildered goalkeeper to net one of the goals of the tournament and secure the Czech’s place in the semi-finals.

After beating France on penalties in the last four, their run was ended by Germany in the final, though Poborsky was part of a handful of players who earned a big move post-tournament, signing for Manchester United.

He spent just two seasons in the Premier League as David Beckham’s emergence saw him struggle for opportunities, later spending spells with the likes of Benfica and Lazio and winning 118 caps during his international career.

Croatia were another of the first-time entrants to make an impression at Euro ’96, reaching the quarter-finals before bowing out to eventual winners Germany in a hard-fought and physical encounter.

Croatia’s charge was spearheaded by the talents of Davor Suker in attack, the forward arriving into the tournament as the leading scorer in qualification with 12 goals, before starring amongst Europe’s elite.

Suker netted three times at Euro ’96 with only Alan Shearer scoring more, including a wonderful brace as Denmark were thrashed 3-0 in the group stages.

Suker’s second is a goal that lives long in the memory as he finished a clinical Croatian counter, executing a sublime chipped finish over Peter Schmeichel to put the gloss on an emphatic win for the debutants.

On this day in 1996, Davor Suker did this… 😍pic.twitter.com/pMJqp3U4BG

The forward scored again in the quarter-final exit to Germany, rounding the keeper in fine fashion before rolling home to an equaliser after Jurgen Klinsmann had opened the scoring from the penalty spot.

Suker’s performances proved the start of a successful period for Croatia, who finished third at the World Cup two years later with their talismanic number nine winning the tournament’s Golden Boot.

The leading light of Bulgaria’s run to the World Cup semi-finals two years earlier, Stoichkov was again amongst the star turns of a major tournament at Euro ’96.

Bulgaria were unable to progress from the group stage as they finished third behind France and Spain, though not for a want of trying from Stoichkov who scored in all three fixtures to be named in the Team of the Tournament.

Stoichkov was one of the finest footballers at the tournament as the fiery forward showcased his full repertoire of talents, netting from the penalty spot in the opener against Spain and having a perfectly good goal disallowed as the game finished 1-1.

He scored the winner as Romania were edged in the second fixture, though was unable to inspire his side against France as Bulgaria crashed out of the competition following a 3-1 defeat to Les Bleus, Stoichkov’s fabulous free-kick proving little consolation.

Despite featuring just three times he trailed only Alan Shearer for goals in the tournament.

Read – Ranking the 10 best Premier League players of the 2010s