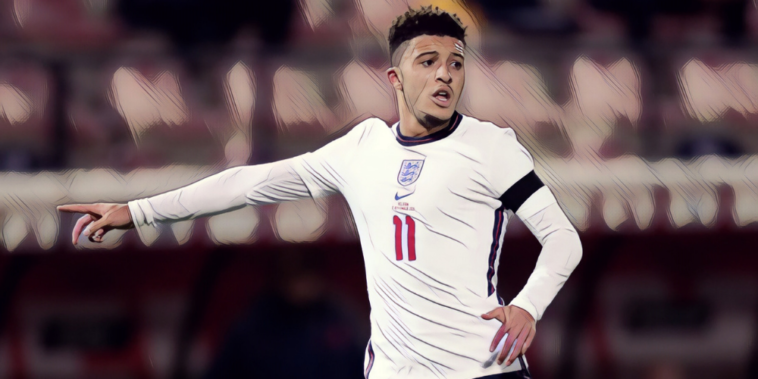 Jadon Sancho insists he is ‘cool’ about his future despite growing ‘speculation’ linking the Borussia Dortmund winger with a move to Manchester United.

Sancho is subject of interest from the Premier League side once again following last summer’s unsuccessful pursuit, with the Red Devils having reportedly seen an opening offer of around £67m rejected for the England international.

Dortmund are believed to be open to the 21-year-old’s sale this summer, though have set an asking price of €90m (£77.5m) to get a deal done, with United understood to have already agreed personal terms with the player.

Sancho is currently with the England squad preparing for their Euro 2020 group opener against Croatia on Sunday, and admits he remains relaxed about the situation despite the ‘speculation’ surrounding a move to the Premier League.

“I’m cool about it,” he told talkSPORT. “There’s always going to be speculation, especially when you do well.

“It’s just how you handle that on the pitch. You’ve got to keep doing what you’re doing, if you keep on doing that then I’m sure that won’t be a problem.

“The main thing is my football and that’s what I’m focusing on at the moment.”

Sancho was asked whether the transfer talk would represent a distraction as he prepares for his first major tournament with England, though the winger says he is focused solely on achieving success with the national side this summer.

“During the season, I always focus on myself and the team because that’s the most important thing you can do.

“Every time I’m on the pitch I always give it my all and I try to curate what I do on the pitch and that’s with goals and assists. That’s what I try to do and to work hard for the team.

“Of course, all the boys have a lot of questions. I feel that’s with a lot of players because we’re all such great, young talents.

“When you do well, speculation is always going to come around. I just tell the boys, ‘look, I’m just focusing on football at the moment’ and we’ll just focus on the Euros.”