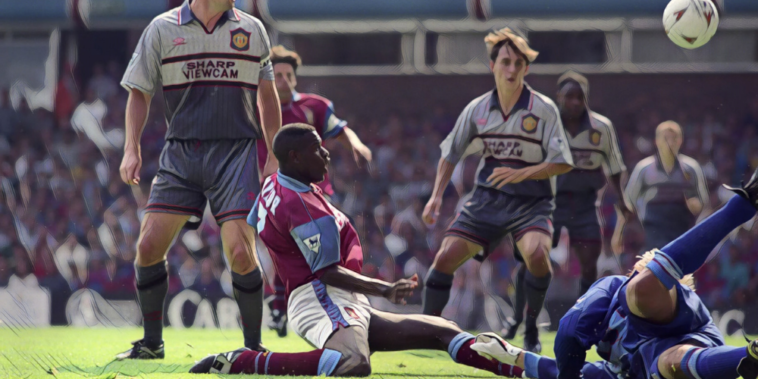 Manchester United’ humbling defeat to Aston Villa on the opening day of the 1995/96 season saw Alan Hansen mutter words that would come back to haunt the Match of the Day pundit.

United had been soundly beaten in their Premier League opener and Hansen was critical of Sir Alex Ferguson following his fielding of an inexperienced side in their 3-1 defeat at Villa Park.

The Red Devils had sold Mark Hughes, Paul Ince and Andrei Kanchelskis without signing replacements, whilst Steve Bruce, Ryan Giggs, Andy Cole and the suspended Eric Cantona were all missing from the starting side at Villa.

Today, 1995: Alan Hansen says Manchester United cant win anything with kids.They go on to win the double that season pic.twitter.com/oskrGsQJ5a

Hansen’s comments that ‘you can’t win anything with kids’ lives long in the memory after Fergie’s Fledglings silenced the critics, roaring back from a testing trip to the Midlands to win a domestic double at the season’s end.

Amongst the experienced members of this youthful side, Schmeichel had cemented himself as one of the best goalkeepers in world football during his time at Manchester United.

The former Denmark international was named as the Premier League’s Player of the Season during their double-winning campaign, but endured a difficult start to the new season as Villa ran riot to score three first-half goals.

The third was scored by future teammate Dwight Yorke from the penalty spot, after Schmeichel had rashly brought down Savo Milošević inside the box.

Phil Neville started at wing-back as Ferguson opted for a 5-4-1 formation without a recognised centre-forward, though the teenager appeared out of his depth for much of the clash at Villa Park.

Much of Villa’s openings came down their left-hand side, with Neville squandering possession in an advanced area ahead of the counter-attack that led to the host’s second goal.

The 18-year-old was hooked at half-time, but recovered to enjoy a successful career with the club including 386 appearances and six league titles.

Neville’s brother, Gary, started as one of three central defenders in the change of system, a formation which failed to work as Villa cut the visitor’s apart in the opening exchanges.

Neville came through the ranks as a central defender before finding a home at right-back in the senior side, remaining a fixture in the Red Devils’ dominant teams of the nineties and 2000s.

He ranks fifth amongst the club’s all-time appearance makers following a one-club career at Old Trafford, representing the side on 602 occasions in all competitions.

Paul Parker had missed much of the previous season through injury but started at Villa Park after returning to full fitness, in what proved to be one of his last appearances for the club.

Parker had played his part in the Red Devils’ emergence as Englands’ best side, but lost his place to the emerging Gary Neville during the 1995/96 campaign and failed to feature in enough fixtures to claim a league winners’ medal, before signing for Derby County on a free transfer.

Amongst the division’s best central defenders during the league’s opening seasons, Pallister was named in the PFA Team of the Year in four of the first five Premier League campaigns.

Pallister spent nine seasons with the Red Devils and made 329 appearances in all competitions, winning 15 trophies, and departed for Middlesbrough in 1998 as the club’s most decorated player at that time.

The defender’s recovery pace and quality in possession perfectly complimented the uncompromising approach of Steve Bruce, in one of the club’s most revered centre-back partnerships.

Another stalwart of the side during the nineties, Irwin became one of the Red Devils’ most dependable players during a glittering career of success at Old Trafford.

Signed from Oldham, he ranks as one of Sir Alex Ferguson’s best pound-for-pound signings and claimed seven Premier League winners’ medals, two FA Cups and the Champions League amongst his honours.

Speaking in 2013, Ferguson claimed Irwin ‘would be the one certainty’ to get into an all-time team of the players he had managed – high praise given the world-class competition for places.

Keane was beginning to grow into the combative leader that would be regarded as one of the Premier League’s best captains in the mid-nineties, with the departure of Ince to Inter Milan providing the Irishman with greater responsibility.

The midfielder’s box-to-box dynamism helped United recover from their embarrassment at Villa Park and overhaul Newcastle in the 1995/96 title race, despite being 12 points adrift of the Magpies at one stage.

He was named as club captain the following summer following the retirement of Eric Cantona.

Scholes had featured sporadically during the previous season before enjoying a breakthrough campaign in 1995/96, scoring ten league goals as the Red Devils won a domestic double.

The midfielder was utilised in an advanced role during his early appearances for United, including as a partner for Andy Cole during Cantona’s suspension over the season’s opening months.

Scholes spent his entire career with the club after coming through the academy ranks, making 718 appearances and becoming the most decorated English footballer of all time with 11 league titles and two Champions League trophies.

The fourth member of Fergie’s Fledglings in the starting XI at Villa Park, having made his senior debut as a teenager during the Premier League’s inaugural campaign.

Butt earned a regular senior breakthrough during the 1994/95 campaign before featuring prominently in the club’s double-winning season, making 41 appearances in all competitions.

He spent a decade as a first-team regular at United and won 10 major trophies before spells at Newcastle and Birmingham City.

Signed as a teenager from Torquay in the late eighties, Sharpe spent eight seasons at Manchester United and initially played a prominent role as the Sir Alex Ferguson era took shape.

He was named as the PFA Young Player of the Year as the UEFA Cup Winners’ Cup was won in 1991, before forming part of the sides that won three of the first four Premier League titles.

The 1995/96 season was Sharpe’s final as a Red Devils player, the emergence of Ryan Giggs, injury problems, and an often difficult relationship with Ferguson contributing to his exit, his latter career plagued by fitness issues during stints at Leeds, Sampdoria and Bradford.

McClair spent more than a decade at Manchester United and scored 127 goals for the club, with the veteran chosen to lead the line at Villa Park in the absence of Cole and Cantona.

The former Scotland international began his career with the club as a forward before dropping deeper into a midfield role, and provided experienced cover in both positions during the 1995/96 season.

He made 23 appearances during the double-winning season, scoring three goals.

Introduced as a half-time substitute, Beckham reduced the arrears eight minutes from time with a spectacular effort from distance that flew beyond Mark Bosnich.

It was the sort of goal that would become a trademark of the future England captain, with a memorable half-way line goal against Wimbledon catapulting Beckham to wider prominence on the opening day of the following campaign.

Beckham returned from a loan spell at Preston before breaking into the team in 1995/96, scoring eight goals in all competitions including an FA Cup semi-final winner against Chelsea.

He won six league titles and the Champions League during his time with the Red Devils and was named as runner-up for the Ballon d’Or in 1999.

Part of the 1992 FA Youth Cup-winning side that spawned the fabled ‘Class of ’92’ contingent, O’Kane came on as a second half substitute as a replacement for Gary Pallister.

It was one of just two league appearances the defender made as a Manchester United player, before spells at clubs including Everton, Bolton, Blackpool and Hyde.