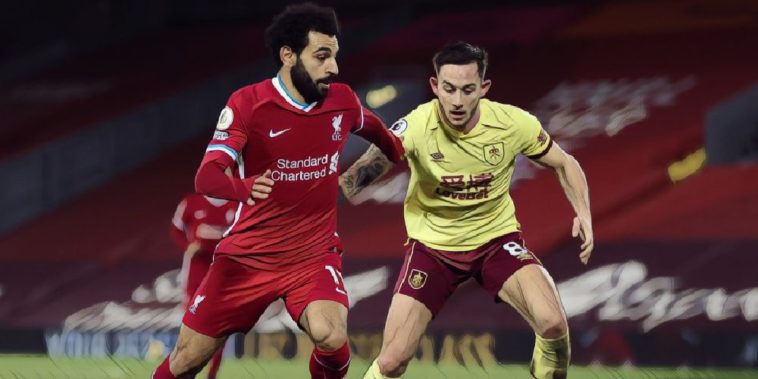 The first game of the weekend sees Liverpool host Burnley on Saturday afternoon, the visitors having claimed all three points on their last trip to Anfield.

Here’s all you need to know about that upcoming meeting on Merseyside:

Liverpool got their season up and running in fine style on the opening weekend, as they secured a convincing 3-0 win over newly-promoted Norwich City at Carrow Road, with Mo Salah almost inevitably the Reds star performer.

After teeing up both Diogo Jota and Roberto Firmino for the visitors first two goals, the Egyptian forward then got himself on the scoresheet with a trademark left-footed finish into the roof of the net, that strike meaning he has now scored on the opening day for five successive campaigns.

Elsewhere it was also a relief to see the returning Virgil Van Dijk come through unscathed, the influential Dutchman making his first competitive appearance for the club since hobbling off against Everton last October.

His return – as well as that of fellow defender Joe Gomez – should have a huge positive impact on Jurgen Klopp’s side as a whole, not just the backline, having been so sorely missed during his extended absence last term.

One potential area of concern, however, is the lack of a central midfield addition to replace the departed Gini Wijnaldum, with the signing of Ibrahima Konate still the club’s only major outlay this summer, despite the heavy investment taking place among their ‘Big Six’ rivals.

That being said, it’s a positive sign that they were able to ease to victory against the Canaries without the likes of Andy Robertson and skipper Jordan Henderson, while midfield destroyer Fabinho was only introduced off the bench.

Having played in a behind-closed friendly with Aston Villa on Sunday, Henderson – and fellow midfielder Thiago – could be available for selection this weekend, although Robertson is unlikely to feature this month.

Burnley’s campaign looked to be getting off to the perfect start after they netted inside two minutes of their clash with Brighton at Turf Moor, before a costly five minute spell midway through the second-half saw the visitors claim all three points.

The home side were perhaps fortunate not to see James Tarkowski’s opener ruled out for a foul on the Seagulls’ Neal Maupay, before the French striker exacted his revenge to draw his side level on 73 minutes, with Alexis Mac Allister then slotting home the winner just five minutes later following an improved second-half showing from Graham Potter’s side.

While a far from ideal start for the Clarets, the club are now in their sixth successive season in the top-flight and thus have a wealth of experience to draw on when it comes to securing survival, with manager Sean Dyche having worked wonders to keep his side competitive on a shoe-string budget.

It has been yet another quiet summer for the club in the transfer market so far, with Wayne Hennessey and defender Nathan Collins the only new arrivals to date, the latter having joined the club on a £12m deal from Stoke City.

Those two arrivals will no doubt add some much needed depth to the squad in key areas, although there is seemingly a lack of options throughout, particularly in midfield, while new additions have often tended to find game time hard to come by such is the almost formulaic nature of Dyche’s first-choice starting XI.

As for team news ahead of the trip to Anfield, the only potential doubts are that of Kevin Long and Dale Stephens, both men having missed the clash with Brighton.

Burnley had ended their opponents remarkable 68-game home unbeaten run with a 1-0 win in January, with that defeat sparking what proved to be a wretched spell of form at Anfield, in particular, for Liverpool.

When the two sides met later in May, however, the Reds had rediscovered their rhythm and were in the hunt for what had previously looked like an unlikely top-four finish, with a win in their final two games of the season likely to see them secure Champions League football.

In what was a hard-fought encounter at Turf Moor, it look Jurgen Klopp’s men 43 minutes to eventually make the breakthrough courtesy of Roberto Firmino, before young defender Nat Phillips netted his first goal for the club after the break.

The centre-back then proved just as pivotal in his own box to head Ben Mee’s effort off the line, before Alex Oxlade-Chamberlain sealed the win and a vital three points with a calm finish in the final few minutes.

UK and Irish readers can watch the match on BT Sport 1.