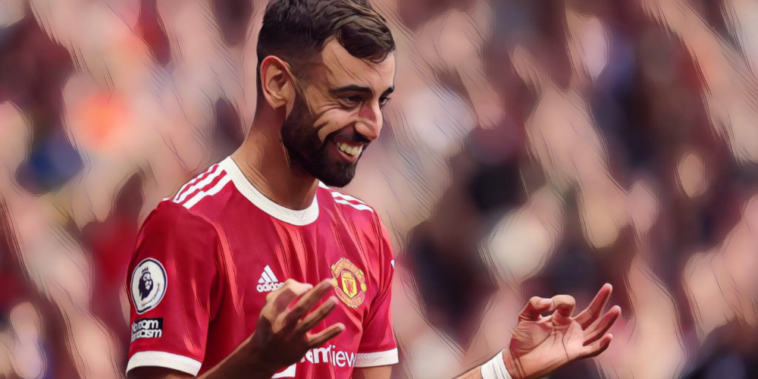 Fernandes has established himself as one of the best players in English football since his arrival from Sporting Lisbon, scoring prolifically from midfield and emerging as the Red Devils’ talisman.

His treble against Leeds was his first in a Manchester United shirt however, becoming the 14th player to score a Premier League hat-trick for the club.

Here is every player to score a Premier League hat-trick for Manchester United.

Man United’s first hat-trick of the Premier League era came from Andrei Kanchelskis, with the winger cementing himself in Red Devils’ folklore after netting three times in the Manchester derby.

Sir Alex Ferguson’s side were in pursuit of a third title in succession and made light work of their cross-city rivals in November 1994, winning 5-0 in a fixture that became known as the ‘demolition derby’ at Old Trafford.

On this day in 1994 Andrei Kanchelskis scored our first Premier League hat-trick in a 5-0 win against Man City. #mufc pic.twitter.com/SysJiPy519

Kanchelskis assisted the opener for Eric Cantona before scoring three times himself, with the former Russia international remaining the only Manchester derby hat-trick scorer in Premier League history.

Andy Cole scored the Red Devils’ second hat-trick of the 1994/95 season in March, becoming the first player in Premier League history to score five times in a single fixture, as part of a record 9-0 win against Ipswich at Old Trafford.

Cole’s five-star display was the first of three trebles he netted in the Premier League for United, also scoring a hat-trick in a 7-0 win against Barnsley during the 1997/98 campaign.

His third hat-trick saw Cole score four goals in a 5-1 thumping of former club Newcastle in 1999, his three trebles for the Red Devils part of 187 goals scored in the division across a prolific career at several clubs – the third-highest total in Premier League history.

Ole Gunnar Solskjaer watched on with delight as Bruno Fernandes joined this exclusive group at the weekend, the current Manchester United manager having scored three league hat-tricks for the club during his own playing career.

Solskjaer’s most memorable hat-trick came as he scored four times as a substitute during an 8-1 win at Nottingham Forest in 1999, achieving the feat after coming off the bench with just 18 minutes remaining.

ON THIS DAY: In 1999, Ole Gunnar Solskjaer became the first player in Premier League history to score four goals as a substitute during Manchester United's 8-1 win at Nottingham Forest.

The Norwegian also scored four goals against Everton later that same year, before scoring three times in a win over Bolton in 2002.

Dwight Yorke also helped himself to three Premier League hat-tricks during a career with Manchester United that included 48 goals across four seasons and a divisional Golden Boot.

Yorke scored a hat-trick in each of his first three seasons with the club after arriving from Aston Villa, the first of which saw him score 29 goals in all competitions as the Red Devils won the treble in 1998/99.

His most memorable hat-trick came against title rivals Arsenal during a clash between the sides in February 2001, the forward scoring three times as Sir Alex Ferguson’s side ran riot to a win 6-1.

#mufc beat Arsenal 6-1 on this day in 2001, with Dwight Yorke completing his hat-trick after just 21 minutes. pic.twitter.com/aN59BUk1ei

Yorke scored his three goals against the Gunners inside just 21 minutes, as United hit the north Londoners for five in the first half alone.

Paul Scholes scored his first hat-trick for the club in a 7-1 thrashing of West Ham in April 2000, the win over the Hammers part of a run of 11 consecutive victories as United were crowned champions by a then-record 18-point margin.

Scholes netted a second league treble as another Premier League title was secured in 2002/03, scoring a hat-trick as Newcastle were dismantled 6-2 at St James’ Park in a clash that also saw Ole Gunnar Solskajer, Ruud van Nistelrooy and Ryan Giggs on the scoresheet.

United signed veteran forward Teddy Sheringham as a replacement for Eric Cantona in the late nineties, the move proving a shrewd signing as the experienced star contributed to a wealth of silverware success.

Sheringham won three league titles in just four seasons with the Red Devils and was named as the PFA Player of the Year and FWA Footballer of the Year during his final campaign in 2000/01.

That season saw Sheringham finish as the club’s leading scorer with 21 goals in all competitions, including a first United hat-trick against Southampton.

Ruud van Nistelrooy’s prolific five-year spell in the Premier League saw the forward cement his status as one of the division’s greatest goalscorers.

Van Nistelrooy scored a staggering 150 goals in just 219 appearances for the Red Devils, including netting five Premier League hat-tricks for the club.

Four of those trebles came during a Golden Boot-winning 2002/03 season as United were crowned league champions, with Van Nistelrooy’s 44 goals in all competitions remaining a single season record for a Premier League player.

No player has ever scored more Premier League hat-tricks for Manchester United than Wayne Rooney, who earned himself six match balls during a record-breaking career at Old Trafford.

Rooney’s first treble came in a clash against Bolton in 2006, whilst he also netted three times against the same opposition during a 5-0 in September 2011.

That latter hat-trick came just a week after Rooney scored arguably his most memorable league treble for the club in an 8-2 win against Arsenal, with the Red Devils’ record goalscorer one of just five players in history to have scored consecutive Premier League hat-tricks.

Cristiano Ronaldo has shattered all manner of goalscoring records during an incredible career, though amongst a burgeoning collection of match balls is just one Premier League representative.

Ronaldo’s sole hat-trick in the division came during a 6-0 win against Newcastle in January 2008, a season in which the winger scored 42 goals in all competitions as United won a Premier League and Champions League double.

Those performances saw Ronaldo win the first of his five Ballon d’Or accolades later that year.

Each of the Bulgarian’s trebles came during a 2010/11 season in which he won the Premier League’s Golden Boot, his first seeing Berbatov become the first Red Devils player to score a hat-trick against rivals Liverpool in 65 years.

Berbatov also netted five times in a 7-2 win against Blackburn later that season, with the forward one of just five players to have scored five goals in a Premier League fixture.

The signing of Robin van Persie from Arsenal proved the catalyst behind Manchester United’s 2012/13 title success, the forward in inspired form to win the Premier League’s Golden Boot and a record-extending 20th title for the Red Devils.

Van Persie’s 26-goal haul that season included all three – including a stoppage-time winner – in a thrilling 3-2 comeback win at Southampton, whilst he also netted a brilliant hat-trick as the title was secured against Aston Villa in April.

His second goal of the hat-trick – a wondrous volley from a raking Wayne Rooney pass – remains one of the best seen at Old Trafford in the Premier League era.

Shinji Kagawa’s place on this list could perhaps be a missing piece of pub quiz trivia, with the Japan international having largely failed to reach the heights expected after a move from Borussia Dortmund.

The midfielder had starred as Dortmund won successive Bundesliga titles, but struggled to replicate those performances in the Premier League.

He did, however, help himself to a league treble for the club after scoring three goals in a win against Norwich in March 2013.

Anthony Martial scored his first senior treble and Manchester United’s first league hat-trick for more than seven years during a 3-0 win against Sheffield United in 2020.

The Frenchman was in the midst of a career-best goalscoring campaign for the Red Devils and produced a clinical display against a Blades side who had impressed since promotion to the Premier League.

He also became the eighth French player to score a Premier League hat-trick.

The goals have flowed with regularity for Bruno Fernandes since his initial arrival in England, though the midfielder picked the perfect time to net his first Premier League hat-trick this weekend.

Fernandes scored three times as fierce rivals Leeds were dismantled 5-1 at Old Trafford, the convincing opening weekend win seeing Ole Gunnar Solskjaer’s side take an early lead at the top of the division.

Fernandes is now one of just four Portuguese hat-trick scorers in the Premier League, following in the footsteps of Cristiano Ronaldo, Bernardo Silva and Diogo Jota.