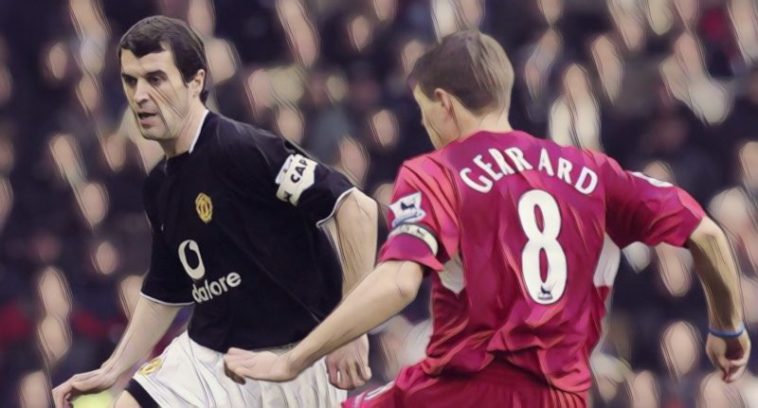 Ahead of this weekend’s huge clash between the traditional rivals, we’ve all seen the current versions of a Manchester United and Liverpool combined XI.

The contrasting fortunes between the two sides at present make it hard to disagree, as Liverpool continue to go from strength to strength and Manchester United slowly stutter into continued mediocrity.

Danny Mills has selected his combined XI ahead of Liverpool's visit to Old Trafford as the Premier League returns this weekend, live on Sky Sports.

A total of 0⃣ Manchester United players made the cut, with Mills saying some would struggle to make the bench! 😳

Whilst it is difficult to make an argument for any United player to be included in a current combined side, it has not always been this way with the Old Trafford side having been the dominant club of the Premier League era and Liverpool having to endure a prolonged title drought.

We’ve decided to make a combined XI of the two rivals players, featuring stars from throughout the Premier League era in a 3-5-2 formation and it is a rather different side to the current line up. And for those of you that think it’s a bit attack heavy, who needs wing-backs when you’ve got three defenders and a ‘keeper like this…

Several candidates to fill our position in goal, though in all honesty, the majority come from the Manchester side.

Both David de Gea and Edwin van der Sar have valid claims to a place as our number one, but we’ve opted for the Great Dane often regarded as the competition’s finest.

Schmeichel would prove a formidable presence during the club’s golden era under Sir Alex Ferguson, winning five league titles and being part of the side which would win the treble in 1999.

Named as Premier League Player of the Season during the club’s double-winning year in 1996, it is hard to argue with his inclusion here.

10 of the best quotes about Manchester United legend Peter Schmeichel

Often described as a ‘Rolls-Royce’ of a defender, the former England international rarely looked flustered and possessed all the attributes required of a leading centre-back.

Quick, strong, and good on the ball, Ferdinand would move to Old Trafford as the world’s most expensive defender in a then British transfer-record deal and proved to be worth every penny.

Ferdinand would spend 12 seasons at the club, winning nine major honours including six league titles and the 2008 Champions League.

10 of the best quotes about Manchester United legend Rio Ferdinand

If Ferdinand brought the elegance, his partner at the heart of the defence would put his body on the line for the cause and help form one of the greatest partnerships in Premier League history.

Physically formidable and a natural leader, Vidic’s £7m arrival from Spartak Moscow in 2006 would prove one of the shrewdest acquisitions of the Sir Alex Ferguson era.

A dominant defender, he would later inherit the club’s captaincy and win nine major honours before departing for Inter Milan in 2014.

The Dutch defender’s transformative effect on Jurgen Klopp’s Liverpool side has led to some hailing him as the Premier League’s greatest ever defender, and whilst those plaudits are most certainly premature, there can be no denying his impact since his world-record move to Anfield.

Liverpool’s rearguard had been their Achilles heel prior to Van Dijk’s £75m arrival, the defender’s towering presence helping the club to the division’s best defensive record as they narrowly missed out on the title.

His performances were rewarded with the PFA Player’s Player of the Year award, just the third defender in the division’s history to receive the accolade, before guiding Klopp’s side to Champions League success, providing a Man of the Match display in the final win over Tottenham.

Keane’s tempestuous personality and ferocious nature may characterise him, but that should not detract from the Irishman’s ability and reputation amongst the Premier League’s all-time greats.

The former Manchester United captain was the inspiration behind some of the club’s greatest triumphs, acting as Sir Alex Ferguson’s on-field voice and establishing himself as the undoubted leader of the Scot’s team.

A dynamic presence of energy and drive, Keane was a complete midfield player whose passing was often vastly underrated.

Few can forget his inspired performances as United reached the 1999 Champions League final, whilst he would win 17 major honours during a glittering Old Trafford career.

A home-grown talent who would form the basis of a side which would dominate English football, a quick search of sporting testimonials of the former England midfielder demonstrates how highly he was regarded.

Few midfield talents have possessed the intelligence or passing range of the diminutive star, who evolved from goalscoring midfielder into deep-lying playmaker as he reached the twilight of his career.

10 of the best quotes about Paul Scholes

A generational talent who would become symbolic for Liverpool during an era of much mediocrity, Gerrard was the local lad who became the face of the Merseyside club throughout his career.

Having formed part of the side which won a treble of cup competitions at the turn of the millennium, Gerrard would be named captain shortly after before memorably inspiring the side to League Cup, Champions League and FA Cup success.

Name as PFA Players’ Player and Football Writer’s Footballer of the Year during his career, his eight inclusions in the PFA Team of the Year is a divisional record.

Widely acknowledged as one of the greatest footballers to have ever lived, the Premier League perhaps did not see peak Cristiano Ronaldo, although the Manchester United version of the Portuguese superstar was certainly a frightening prospect.

Arriving as a raw but talented teenager, Ronaldo would evolve into one of the best attacking talents on the planet, inspiring United to three successive league titles. The second of those championship successes came alongside Champions League glory, Ronaldo hitting 42 goals in all competitions to be awarded the Ballon d’Or for the first time in his career.

He would win a PFA Player’s Player and FWA Footballer of the Year double in successive seasons, before departing for Real Madrid in a world-record deal in 2009.

10 of the best quotes on Cristiano Ronaldo

The most decorated footballer in the history of the English game was a shoe-in for our side, having enjoyed a career of unprecedented success.

He would begin his career as a flying winger, possessing electric pace and a seemingly nonchalant ability to ghost past opposition full-backs, before later becoming a central creative force as his speed declined.

His longevity and quality saw him provide 162 Premier League assists, the most in the competitions history and a huge 51 more than second-placed Cesc Fabregas.

Arguably the most hotly-contested positions on our team sheet, both sides have had a wealth of attacking options throughout the course of Premier League history.

Perhaps none, however, have had such a significant an impact as the man known as ‘King Eric’ at Old Trafford.

The story told is that Sir Alex Ferguson responded to Leeds’ interest in Denis Irwin with an ambitious enquiry into the Frenchman’s availability, only to be told their Yorkshire rivals were willing to part with the enigmatic forward.

Cantona’s arrival would prove the catalyst behind United’s era of dominance, helping end the club’s 26-year wait for a league title in his debut season and becoming one of the most iconic players in Premier League history.

Opinion: Eric Cantona and how he made us feel

The Liverpudlian would burst onto the scene as a precocious teenage talent at Everton, before making a big-money move to Manchester United and becoming the greatest goalscorer in the club’s history.

For all of his critics throughout his career, Rooney was a brilliant street-footballer, a whirlwind of energy, tenacity and sublime technique.

At his peak, few forwards in Europe could compare with Rooney, who would every major honour during his time at Old Trafford, one of just two English footballers alongside teammate Michael Carrick to have achieved the feat.

His 206 Premier League goals put him second only to Alan Shearer, whilst he also has the third-most assists in the competitions history.

His finest individual season would come in 2009/10, where he would scoop a PFA Player’s Player and FWA Footballer of the Year double after firing 26 league goals.

A tough call ahead of talents such as Luis Suarez, Ruud van Nistelrooy and Mohamed Salah, but Rooney is deserving of a spot in our side.

10 of the best quotes about Premier League legend Wayne Rooney