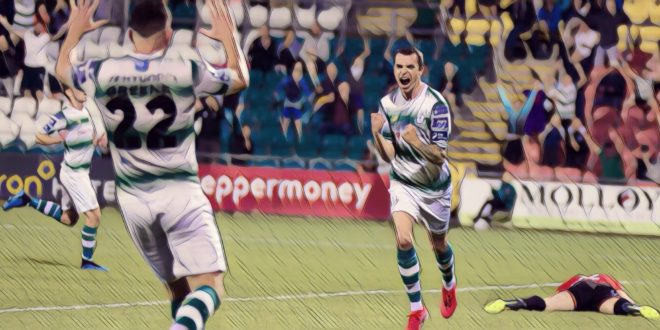 Three observations for the League of Ireland, including Neale Fenn’s ignominious jump to Cork City, why Collie O’Neill deserved better from UCD, and this might be the year Shamrock Rovers end their FAI Cup hoodoo.

It was a big week for managerial change in the SSE Airtricity League of Ireland, as three managers left their respective clubs for different reasons. The second round of the FAI Cup also took place, as the competition is pared down to the final eight teams.

With just a few weeks left in the First Division season, Longford Town manager Neale Fenn has resigned in order to jump ship to Cork City to become the new head honcho at the top flight side

The timing is odd, as the midlands outfit are going to qualify for the playoffs and have a shot at promotion, but for Fenn it represents an opportunity to make a step up in his managerial career.

Daire Doyle took over the reigns last Friday night for the club’s penalty shootout defeat to Bohemians at Dalymount Park, which all but confirmed Fenn’s departure.

While one could justifiably argue that the Rebels are potentially derailing another team’s season by poaching their manager at a crucial juncture, it makes sense for them to make a move now.

Relegation appears unlikely at this point, although they are still not mathematically safe, but performances have not improved since John Caulfield left earlier in the year and home crowds are decreasing. The nadir came in last weekend’s desperate defeat to Galway United, a side struggling in the tier below.

Awesome night for GUFC! Cork City had ZERO shots on target. They were beyond pathetic. Very proud of our young side! #gufc pic.twitter.com/wjABxOKurL

Will Neale Fenn succeed at Turner’s Cross? The team will need to transition from the squad that brought so much success in recent years, but the building blocks are in place for the Londoner to put together something worthwhile.

Question marks hover, however, as Longford struggled under Fenn last season, and are currently third in the table when promotion was a big priority before the campaign began. A friend of the column who is a Town match going regular told The Football Faithful that “he’s achieved even less than Tony Cousins, who was genuinely clueless.”

How this all comes out in the wash will be genuinely fascinating, and only time will tell if they have found their man. But they might regret not going for a certain free agent instead…

During midweek it was revealed that UCD AFC manager Collie O’Neill had been relieved of his duties at the club, a 10-1 loss at the hands of Bohemians the weekend beforehand the straw that broke the camel’s back.

With the Students lying rock bottom of the Premier Division table and having lost their previous four league games by an aggregate score of 22-3, it would look on paper to be the correct decision. What club could possibly justify keeping a manager with a team performing so badly?

There are mitigating factors, however, namely the firesale of key players in the middle of the season. In July, Gary O’Neill and Neil Farrugia were sold to Shamrock Rovers, while Conor David joined Derry City. Three other players also left the club in the same week, and the team have been missing first choice goalkeeper Conor Kearns through suspension during that wretched run.

For a club like UCD, this is the name of the game. They are a feeder club for the bigger teams in the League of Ireland, producing talented young players who will only stay at Belfield for so long. But to sell off some of their best talents and then blame the manager for the results? There’s a level of cognitive dissonance going on there in the club’s hierarchy.

O’Neill deserved better than to be sacked like that, with the club just six points off the relegation playoff spot with a game in hand, and considering the huge job he did the past four years building the team, taking the side on a Europa League journey in 2015 and winning the First Division title last year.

Incidentally, the first game without the Drogheda native in the dugout was the last game of the Harry Kenny tenure at St Patrick’s Athletic, after the Inchicore outfit lost 3-1 to the Students in the FAI Cup second round. Performances and results have not been as good as expected since the former Bray Wanderers coach stepped into the job in the offseason, and losing to such an inexperienced side spelled the end for the Dubliner.

There will be no repeat of the Dundalk-Cork City matchup that has headlined the FAI Cup final the past four years, after the latter timidly exited the competition at the second round. The Lilywhites, meanwhile, secured a dramatic extra time win over Derry City to ensure their passage to the quarter-finals.

Now that we are down to the final eight, there are some potentially mouthwatering ties we could see in the final, including the top two in the Premier Division, or perhaps a Dublin Derby faceoff between Bohemians and Shamrock Rovers. Now that would be something to see at Lansdowne Road.

Whichever two teams make up the decider, Rovers are intent on ending their longstanding drought, which has stood since 1987 when they won the trophy for the third successive time. Since then they have been to the final three times, losing on each occasion to Galway United, Derry City and Sligo Rovers.

The league is virtually Dundalk’s already, and while the Tallaght faithful would love to see them win it, there’s a sizeable faction would probably pick the cup over a league win at this stage.

The Hoops just bulldozed Drogheda United 4-0 in the last 16 and with a strong squad they have a great chance of going all the way this year. The other teams still left in the competition are Waterford, Sligo, Galway, UCD and non-league Crumlin United.

Read: Nine Irish youngsters at Premier League clubs to look out for in 2019/20