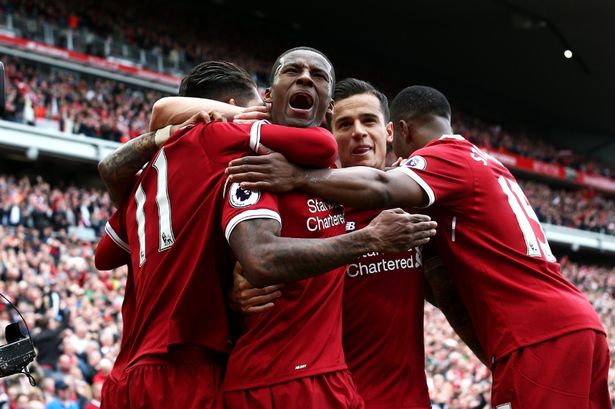 A 3-0 victory for Liverpool saw them finish fourth and qualify for next seasons Champions League, whilst Middlesbrough’s fate has been sealed for some time.

For Liverpool it was a game of which so much was at stake. The success of their season came down to one final game, one last push. That push was, of course, to claim a top four spot in the Premier League and make a return to Champions League football.

The aim for Jurgen Klopp in his first full season in charge was to take the Anfield club back into Europe’s premier competition, and with just Middlesbrough left to play it would surely be a case of ‘job done’ come 5pm on Sunday 21st May.

In stark contrast to their opponents, Middlesbrough had very little to play for. Their only motivation was to restore some pride, coupled with potentially leaving some sort of mark on what has been an otherwise dire attempt at establishing themselves in the top flight. If they managed to prevent Liverpool achieving their Champions League dream they would at least have played their part to some extent.

Unfortunately for Steve Agnew’s beleaguered men, they did little to suggest an upset was on the cards.

In a first half dominated by the home side, Middlesbrough actually held their own rather admirably, despite the numerous efforts of Liverpool’s playmaker and chief tormentor, Philippe Coutinho. The Brazilian looked the most likely to bring about the opening goal, either by creating opportunities for teammates or taking on chances himself. However, no goal was forthcoming. With news of Arsenal, who were ready to pounce should Liverpool slip up in the top 4 race, taking the lead at home to Everton, the home crowd became anxious.

The nervy atmosphere only served to play into Boro’s hands as they looked to take advantage of a Liverpool side clearly aware that things weren’t going their way. Looking decent going forward, the impressive George Friend making many a foray down the left side, there were signs that perhaps Middlesbrough weren’t just going to come and lie down.

And on 22 minutes the Anfield faithful held their breath.

Following a neat one-two with Adam Forshaw, Patrick Bamford, making his second start in successive weeks, managed to get in behind Dejan Lovren. Rather clumsily Lovren appeared to bundle Bamford over inside the 18 yard box, except referee Martin Atkinson waved the Boro appeals away.

It looked like a stonewall penalty, even the home fans seemed to expect it, however the collective sigh of relief came as Lovren’s challenge went unpunished.

Only moments later Rudy Gestede went close with a header from a Stewart Downing cross; things weren’t going to plan for Klopp’s men.
Chance after chance came and went without the net bulging. Daniel Sturridge, making his second consecutive start for the first time since November, went close a couple of times as he fired wide from inside the box. Both Coutinho and his Brazilian counterpart Roberto Firmino were also guilty of profligacy in front of goal, yet the pressure from the home side was rising.

That pressure finally took its toll on Boro’s backline. After a clever Firmino flick, Georgino Wijnaldum found himself in plenty of space down the right side of the penalty area. Within a flash he lashed the ball inside Brad Guzan’s near post. As the net rippled, the tension within the stadium evaporated, they’d finally broken Boro down in first half stoppage time.

There’s no doubt Guzan would’ve been disappointed to concede in that manner, right on half time and at his near post, but it was a great strike from Wijnaldum, struck with venom seemingly built up from an otherwise frustrating opening 45 minutes.

The goal definitely had the desired effect. Come the second half the Merseysider’s looked a totally different side. Much more confident and assured on the ball, Liverpool pressed from the off and soon got their just rewards as Sturridge drew a foul around 25 yards out.
Only five minutes after the restart the home side doubled their advantage. From the resulting free-kick the talismanic Coutinho stepped up, firing a low shot across Guzan’s goal, and into the keeper’s bottom right corner. It was richly deserved as they’d burst out of the traps when returning from the half-time break, and things soon got ever better for them.

Following a Boro corner, Liverpool quickly cleared their lines, and soon found themselves in Boro’s box. The ball broke to Adam Lallana, who hadn’t been at his best up to that point, from a headed Wijnaldum pass, and he coolly slotted home with from close range.

If the game hadn’t already gone for Boro, the third goal made absolutely sure there was only going to be one outcome.

With just over 20 minutes remaining, a flurry of chances came and went for Liverpool, but they were unable to add to the three they had already. Sturridge, Firmino, Wijnaldum and Emre Can were all guilty of wasting opportunities to add a touch of gloss to the scoreline.

The danger was that it could become embarrassing for Boro, but thankfully for them and their long suffering supporters, Liverpool failed to capitalise.

Boro could’ve had a consolation late on. Substitute Alvaro Negredo, no doubt making his final Boro appearance, played in Forshaw. However, his trickling effort rolled harmlessly wide of Simon Mignolet’s goal, epitomising a Boro season that has passed without as much as a whimper.

As the full-time whistle came, the delight on Klopp’s face was clear for all to see. In a game that hadn’t quite started out the way he would’ve wished, his team manage to regain their composure after a shaky start and put an extremely lacklustre Middlesbrough side to the sword.

For Liverpool they can now dream of magical Champions League nights next season, providing they can negotiate the qualifying stage at the start of the 2017/18 campaign.

As for Middlesbrough, the game kind of summed their season up. In a match where their game plan seemed to be working, they managed to frustrate and threaten, albeit timidly, in the first half. Yet when Wijnaldum’s strike broke the deadlock, they unravelled like they have done so often in the second half of the season.

It was a tale of the two Boro’s. Unfortunately for them, neither guise has been effective enough for them to survive. They now have a summer of rebuilding coming up in preparation for life back in the Championship.

Without a confirmed manager in place either, there’s so much to be decided.

Club Chairman Steve Gibson spoke of ‘smashing the league’ next season. For that to happen he’ll be hoping the Championship doesn’t see a repeat of the bore-fest that his beloved Boro have put on show this season.

Check out Five things we Learned from this game

Man of the match: Philippe Coutinho