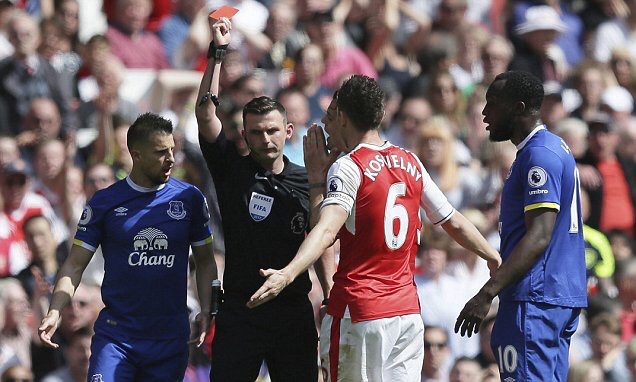 Arsenal missed out on a top four finish on the final day of the season for the first time in 21 seasons despite a 3-1 win over Everton.

Arsenal began the match like a team on a mission and Everton were unable to cope with them. Hector Bellerin was heavily involved in the opening few minutes. His low cross was turned just wide by Danny Welbeck as Arsenal looked to take the lead. Bellerin got his reward in the eighth minute. Mesut Ozil’s cross was intended for Welbeck who was unable to get on the end of it. Luckily Bellerin was there to finish it and Arsenal broke the deadlock.

Everton were struggling to get into the game as Arsenal attempted to increase their lead. However, the Toffees were handed a numerical advantage when Laurent Koscielny was red carded for an awful tackle on Enner Valencia. The Arsenal captain could have no complaints. His dismissal means that he will now miss the FA Cup Final against Chelsea next weekend.

Even though Arsenal were down to 10 men, they continued to push forward and create problems for their opponent. Alexis Sanchez was next to get his name on the scoresheet. The Chilean’s shot was deflected but Welbeck kept the ball alive and squared it for Sanchez who tapped in with ease to score his 24th league goal of the season. Everton were all over the place.

Towards the end of the first half, Ronald Koeman’s side finally started putting in some effort. Ross Barkley and Enner Valencia’s shots were blocked in the Arsenal penalty area. Then Petr Cech made three fantastic saves to deny Romelu Lukaku, Idrissa Gana Gueye and Valencia and ensure Arsenal held onto their 2-0 lead.

Arsenal nearly made it 3-0 at the beginning of the second half but Robles was on hand to save strikes from Welbeck and Ozil.

Everton halved the deficit in the 58th minute. Romelu Lukaku converted a penalty following Nacho Monreal’s handball in the area. This was Lukaku’s 25th league goal of the campaign. Petr Cech has not saved a penalty for Arsenal despite facing 17 attempts from 12 yards. He has made some crucial saves for Arsenal in recent weeks, but his penalty record is atrocious.

Robles denied Ozil once again with another good save. The away side continued to push for an equaliser with Kevin Mirallas firing just over the bar. Phil Jagielka and Valencia also had attempts that were off target.

Aaron Ramsey scored a sublime goal, his first of the season, in stoppage time to make it 3-1.

Arsenal finished the season in 5th place. This is the first time since 1996 that they will not be in the Champions League. The Gunners will instead compete in the Europa League next season and undoubtedly face a huge summer of change.