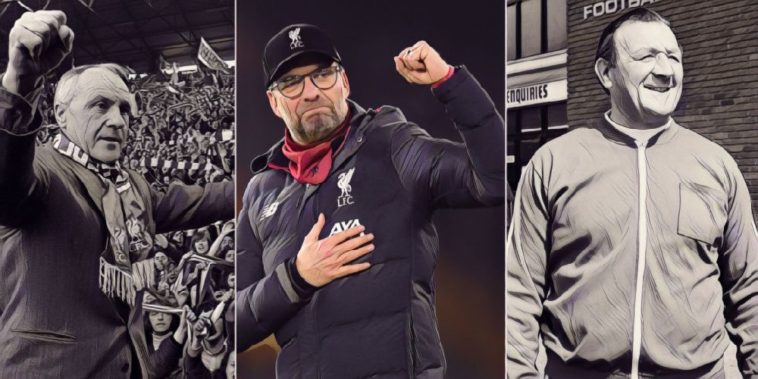 Jurgen Klopp has reacted to comparisons between himself as Liverpool’s great managers of the past, and discussed building a new dynasty at the club after securing a long-awaited title triumph.

Klopp’s history-making achievement has led to the German being compared alongside the club’s greatest ever managers, though he insists his sole focus is on achieving further success and not his ranking amongst Liverpool icons of the past.

“I don’t feel anything about it because I don’t see it that way,” Klopp told the BBC. “It’s not too important. But if people want to see it like this, I’m not the guy to tell them to stop doing that. But I don’t care.

“I don’t want to be disrespectful but they are really icons. What Bill [Shankly] and Bob [Paisley] did is just incredible and in very difficult times – people had nothing and they lifted and built this city.

“Kenny [Dalglish] was player-manager – it’s unbelievable, I don’t think there is any story that can compare with that, just incredible. And still in the club – King Kenny!

“The Steven Gerrard generation fought so hard for it – won the Champions League, won different trophies, but not this one. All these things, since we use our history in the right manner, since we don’t compare any more, since we are just happy about it, build on it, since then we can do what we do now. It’s great. I’m really happy to be part of this.”

Klopp said that Liverpool’s title triumph ‘means absolutely everything’ following a season of remarkable ruthlessness and consistency, the Reds securing the championship with a record seven games of the season remaining.

The German spoke about putting smiles on the faces of the club’s fans, admitting the success was a huge moment and boost to his adopted city at a time of unprecedented crisis and uncertainty.

“It means absolutely everything to me. It’s the only reason why we play football. This city is a very emotional city that went through a lot of hard times, like the club had to go through and having these good moments is essential. It makes me so happy that we could deliver that, that’s unbelievable. Having a successful football team in a city always lifts the mood in a city so it helps everything.

“At this moment in time, in the biggest crisis our generation has probably ever had, it’s so important that we don’t forget that there is something we can really look forward to, that we are allowed to look forward to. We want to have in the future our life as well because also nice in the past we want to have in the future. We can’t have it now, which is really exceptional thanks to everybody who was involved in making that happen.

“It means everything. I said it last year after the parade – I had eye contact with so many people and that is the most intense experience I’ve ever had in my life. It drains you out – it’s like wow. You see how much it means and that makes it absolutely special.”

Liverpool’s coronation as Premier League champions follows the club’s sixth European Cup last season, and Klopp says ‘everything is possible’ for his side if they remain humble as the Reds attempt to build a dynasty on Merseyside.

“Last year we had 97 points so we were really close – it’s not like it’s been up and down with us. Here’s the second year now where obviously we are pretty good.

The rise and rise of Liverpool under Jurgen Klopp… 🔴 pic.twitter.com/GiJ7IqHfAe

“As long as we stay humble, everything is possible for us. As long as we are ready to still write the stories we want to tell our grandchildren in the future, we are a team who could play some good stuff and is really not a joy to play against. So that’s what we want to be. People look at the fixtures and think ‘ugh, wow, April – Liverpool’. Nobody wants to play them – that’s the plan. I think that’s possible.

“Being successful and if people judge us and that we finally win all the stuff, that’s really difficult because the other teams are too good for that. They have a good chance to improve of course as well – we have to be better, they have to, we will, they will and then we will see who is best.

“But in a moment like this I don’t think it makes a lot of sense to think about all this stuff. We are in a very good moment now and in a week’s time we play against Manchester City and we have to show that we are still a good football team and that’s what we will try.”