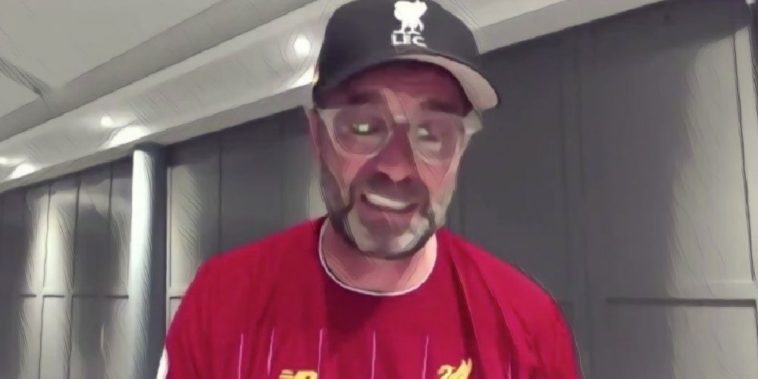 Jurgen Klopp admits he was ‘absolutely overwhelmed’ with emotion after league leaders Liverpool were crowned as champions of English football.

Klopp could hardly contain his delight after ending Liverpool’s long wait for title success – breaking into tears at the end of an interview with Sky in the immediate aftermath – admitting his body was in shock following the ‘intense’ emotions felt following his historic achievement.

“I realised it was obviously really big, I knew that before but I don’t think you can be prepared for a situation like this, I was not. Well, maybe you can, but I wasn’t and so it hit me full, in my face, and when I’ve had similar situations you know that it’s nice but it’s intense as well.

“So I was happy after the game but I was happy as well when I went to bed and could sleep, finally, because it’s a lot that’s going through my mind in moments like this.”

Klopp became the first German manager to win the Premier League and his name will now forever be associated with ending Liverpool’s long wait for title success, and the 53-year-old expressed his ‘relief’ as the red half of the city embarked on wild celebrations.

“I’m not sure if its always like this, I don’t feel the pressure too much before it happens but when it happens the amount of relief shows how big the pressure was before so yes, mostly relief.”

Liverpool’s players and staff watched the Manchester City game together at a hotel in Formby before partying long into the night following the full-time whistle at Stamford Bridge, with footage of Klopp’s dancing going viral on social media.

The Reds’ boss played down his exuberant celebrations in evidently joyous circumstances, however, insisting he was simply expressing his delight following ‘a good moment’ in his life.

“It’s not that it’s important, that’s just me. If I want to dance, I’ll dance. I don’t do it for the boys or whatever,” he said.

“We were in a good mood obviously, so it happened not for the first time on an evening event. The boys know that I like a dance from time to time, when it’s appropriate and we have the opportunity to do it.

“Last night was a good moment in my life so I expressed that on the dance floor as well.”

Klopp also reserved special praise for his players and their relationship following their title-winning season, hailing the attitude and personality of a Liverpool squad who have enjoyed a rapid rise in recent seasons.

“Absolutely exceptional. I am really lucky because I had a very good relationship with all my teams but the mix of skill sets that these boys bring in here, plus the personality they bring is absolutely exceptional and only this combination of things makes it possible.

“There is no chance if the same skills but a different mindset or different personality, no chance and these boys to have the mix of all necessary things for successful football is absolutely exceptional.

“And on top of that they are really a bunch of top, top boys and I am really happy to be part of this moment. I was 100% involved in the decision making to bring them in and keeping them and stuff like this, but you need to be lucky as well with judging people and they educate themselves as well.

“It is not easy to be the strange guy, they are all individuals and different and that’s good, but they have no real selfish characteristics, that’s good.”