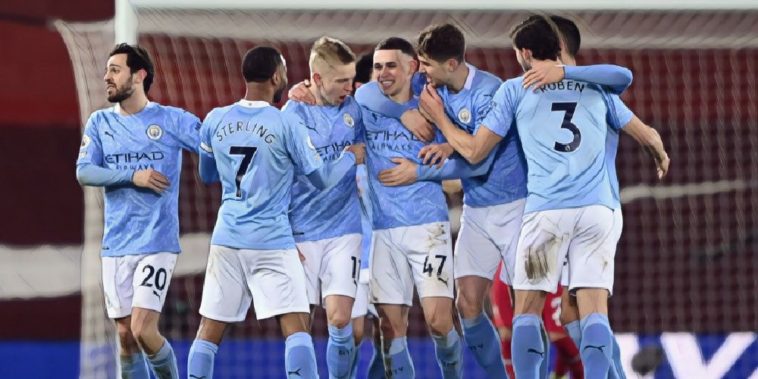 Manchester City made a huge statement as they ended their Anfield hoodoo with an impressive 4-1 win over Liverpool as they look to reclaim the Premier League title.

While it wasn’t the best of starts by either side, it was Liverpool who had the best chances of the opening half-hour, a Trent Alexander-Arnold cross finding Sadio Mane who sent his header over the bar, while Roberto Firmino forced a save out of Ederson with a dipping volley.

Man City would, however, would be offered the chance to take the lead after being awarded a 35th minute penalty, Raheem Sterling being brought down by the trailing leg of Fabinho. Ilkay Gundogan has been an influential figure in City’s excellent run of form, though the German stepped up and blazed his effort high and wide into the Kop as the Citizens’ relatively poor record from the spot manifested itself once again.

All in all, the first half was somewhat of a snooze fest, though within four minutes of the restart, the Premier League leaders took the lead. Raheem Sterling ran at Alexander-Arnold, before squaring the ball to Phil Foden, the England international seeing his effort saved by Alisson, though his parry fell straight into the path of Gundogan, who made amends for his penalty miss by firing home the rebound.

Liverpool did pull themselves level just after the hour mark, Mohamed Salah getting in behind the usually imperious Ruben Dias, the Man City summer signing pulling the Egyptian down in the box, with the league’s top scorer despatching the resulting penalty down the middle of the goal.

Having started through the middle, Pep Guardiola moved Phil Foden to the right, and the move paid instant dividends, the 20-year-old pouncing on a dreadful clearance from Alisson, dancing past the Liverpool defence before squaring it to Gundogan who tapped City ahead from inside the six-yard box.

Minutes later and Alisson was at it again, the Brazilian – under minimal pressure – playing a pass straight to the blue shirt of Bernardo Silva, who advanced into the box and lifted the ball over the Reds’ ‘keeper with Raheem Sterling diving to head the ball home.

Having been involved in the first and second, Foden then netted one of his own in superb fashion, substitute Gabriel Jesus switching the ball out to the right before the City academy graduate fired home a venomous strike from a difficult angle having taken on Robertson.

The win was City’s first at Anfield since back in 2003, and moves them 10 points clear of Liverpool while they still have a game in hand, and speaking afterwards, Pep Guardiola was delighted with his side’s reaction during the game, while insisting man of the match, Foden can improve further.

“Huge victory for us,” he told Sky Sports. “Three more points at the end but I take into consideration the fact we won after we missed a penalty and conceded a goal but the way we reacted… that made the difference.

“We started really well. We cannot play like they play, we have to play in a slow rhythm. Second half we adjusted our set up and the quality of the players did the rest.

“Phil Foden is a guy who keeps the ball really well, he arrives so aggressive but he is also still so young. Still, in some positions, he doesn’t know what he was to do. When he plays wide it is more easy for him, he will learn. The action for the second goal and the fourth goal, we know what a huge talent he is but he is still young and hopefully he can understand he can still improve.

“It is an important win but it is February. Of course, the gap to fifth is big right now and that means for the Champions League for next season is important but 10 wins in a row in this period is something exceptional. Today is the time to talk about this but tomorrow we look to the next game.”

Next up for Manchester City is an FA Cup fifth-round tie against Swansea before facing Tottenham in the Premier League next week.

Read – Five of the best games between Guardiola and Klopp teams