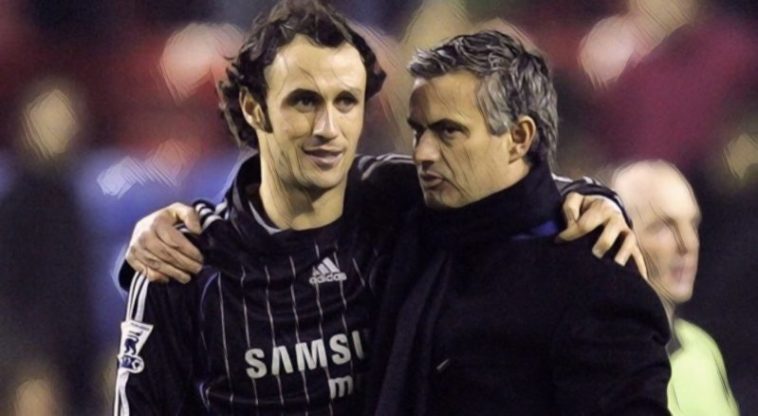 One of the most successful coaches in football history, Jose Mourinho has taken charge of some of the world’s biggest football clubs during a career that has delivered eight league titles and two Champions League trophies amongst his list of honours.

The self-proclaimed ‘Special One’ has coached some of the games’s greats during spells at the likes of Chelsea, Real Madrid and Inter Milan, but which players have featured in his teams most often?

Cech arrived at Chelsea during the first summer of Mourinho’s first spell in charge at Stamford Bridge and quickly established himself as a key figure for the billionaire-backed west London side, helping the Blues to back-to-back league titles.

The first of those titles came with a record low of just 15 goals conceded as Cech won the Premier League’s Golden Glove, developing a reputation as one of the finest shot-stoppers in European football.

Cech made 195 appearances under Mourinho and was part of the side which won a third league title in his second spell at the Blues, though his contribution was somewhat limited following the emergence of Thibaut Courtois.

Another player who joined Mourinho at Chelsea during that first summer, Ferreira followed his compatriot to English football after forming part of the Porto side which memorably won the Champions League under the ‘Special One’ in 2004.

Ferreira was a regular member of the side which won back-to-back Premier League titles in 2005 and 2006, and would remain in west London for almost a decade before his retirement in 2013.

The right-back made 211 appearances under Mourinho over spells at Porto and Chelsea, winning an impressive ten trophies.

No player has ever made more appearances under Jose Mourinho than Ricardo Carvalho, the classy defender who followed his compatriot from Porto to Chelsea and then later to Real Madrid.

Carvalho’s elegant style made him the perfect partner to John Terry at Chelsea and the duo formed a solid understanding at the heart of the defence, setting a new Premier League record for the best defensive record in the title-winning campaign 2004/05.

The leader of Chelsea’s greatest ever team under Mourinho’s management in the mid 2000’s, Terry won three league titles under the Portuguese and established himself as arguably the greatest centre-back in Premier League history.

Terry made 266 appearances under Mourinho and was a hugely influential figure in his triumphs at Chelsea, being named as the PFA Player’s Player of the Year as the club won a first league title in half a century during Mourinho’s debut season in English football.

Only Carvalho has played more times under his guidance, the strength of their relationship apparent with Terry’s admitting Mourinho was his ”best manager by a long way”.

Mourinho’s most used left-back is Real Madrid stalwart Marcelo, the Brazilian having been a key figure in the side of the Spanish giants throughout the manager’s three-year reign at the Bernabeu.

Marcelo made 113 appearances under the Portuguese and was part of the side which won the La Liga title in record-breaking fashion in 2011/12, Madrid setting a series of new landmarks including most points (100), most goals scored (121) and most wins (32).

Despite the left-back’s status amongst the world’s finest in his position for over a decade, Mourinho surprisingly omitted the big-haired Brazilian from his all-time best XI in favour of William Gallas.

Another favourite of the ‘Special One’, Nemanja Matic returned to Chelsea during Mourinho’s second spell at Stamford Bridge after initially being allowed to leave the club under André-Villas Boas three years earlier.

The Serbian had shown remarkable signs of improvement at Benfica and quickly cemented his position in the first-team upon his return to English football, playing a key role as Chelsea were crowned Premier League champions in 2014/15 to be named in the PFA Team of the Year.

Matic’s physicality and ability to screen the defence greatly appealed to the often pragmatic Jose, who signed the midfielder once more following his move to divisional rivals Manchester United.

One of six players in this side to have played a part in Mourinho’s back-to-back Premier League title triumphs, perhaps few players played as influential role on Chelsea’s initial successes under the manager than Frank Lampard.

Lampard was named as the FWA Footballer of the Year after inspiring the club to that first drought-breaking title in 2005, scoring 13 goals – including a double as the championship was clinched at Bolton – and finishing as the leading assist provider in the division.

An almost ever-present in the Chelsea side for more than a decade, Lampard retired as the club’s all-time record goalscorer and made 215 appearances during Mourinho’s two spells at Stamford Bridge.

Mesut Ozil may often be a source of criticism following some inept displays in the Premier League of late, but the German was a key figure in Mourinho’s Madrid side to establish himself as one of the world’s finest playmakers.

Ozil made 157 appearances and won both La Liga and the Copa del Rey, finishing as the leading assist provider in the division as Los Blancos broke a succession of records on their way to the former triumph.

In truth, the relationship of a luxury-talent in Ozil and a manager famed for his work-rate and discipline should never have worked, but the German produced arguably the best form of his club career under Mourinho – registering 43 assists in all competitions over his first two seasons under the Portuguese.

An unsurprising inclusion on this list, Cristiano Ronaldo has been the first name on the team-sheet for a succession of managers during a career which has set records tumbling and made the extraordinary become a regular occurrence.

Ronaldo spent three seasons under his compatriot in the Spanish capital and made 164 appearances in all competitions, appearances which delivered an incredible 168 goals – including a career-best haul of 46 league goals in Real’s 2011/12 La Liga winning campaign.

The duo endured a strained relationship at times during their shared period at the Bernabeu, though each was vital to the other in terms of bringing success to the capital club.

A leader in Chelsea’s title-winning teams of the Mourinho era, Didier Drogba was amongst his manager’s most trusted lieutenants at Stamford Bridge and one of the Portuguese’s greatest ever signings.

Mourinho first signed the Ivorian from Marseille in 2004 before again signing the talismanic forward during his second stint at the club a decade later, Drogba making 186 Chelsea appearances under his tutelage.

During that time the talismanic star won three league titles and two league cups, Drogba often proving to be the man for the biggest of occasions during his time at the west London side.

Drogba continues to share a unique bond with a manager he says ‘changed his life’, their relationship a perfect union of two serial winners.

Benzema had struggled somewhat during a difficult debut season at Real Madrid prior to Mourinho’s arrival, before fulfilling his potential with a prolific record during the latter’s three year spell in charge.

The French forward made 150 appearances under Mourinho and scored 78 goals, winning the Copa del Rey and La Liga under his guidance and establishing himself as one of the best strikers in Spanish football.

Benzema’s haul of 32 goals in all competitions during Real’s title-winning season of 2012 remains the best haul of his career to date, the former Lyon star the selfless focal point of an untypical free-scoring Mourinho side.