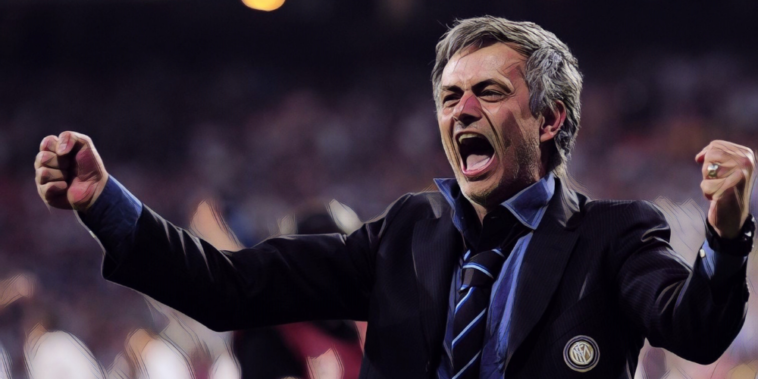 He’s the self-proclaimed ‘Special One’ and one of the most successful managers in the history of the sport, Jose Mourinho’s career has seen him coach some of the finest footballers of the modern era.

The Portuguese tactician’s career has delivered eight league titles and two Champions League crowns, with Mourinho guiding the likes of Chelsea, Inter Milan, Real Madrid and Manchester United to major silverware during an illustrious career at the highest level.

We’ve decided to compile an all-star XI of the very best players Mourinho has managed, a hypothetical dream team that would prove difficult to stop.

Here is our best ever XI of players managed by Jose Mourinho:

Cech arrived at Chelsea during Mourinho’s first summer in English football, a deal for the young goalkeeper having been agreed prior to the arrival of the charismatic Portuguese.

The Czech Republic international quickly established himself as a first-choice and enjoyed a hugely impressive debut season as Chelsea secured a first league title in half a century, winning a maiden Premier League crown with a record low of just 15 goals conceded.

Back-to-back titles were secured the following season as Cech continued to develop a reputation as one of Europe’s best shot-stoppers and he would spend over a decade with the club, winning a third title under Mourinho’s guidance during the manager’s second spell with the Blues in 2014/15.

Cech won four league titles and the Champions League amongst his 13 major honours at Chelsea, whilst no goalkeeper has ever kept more clean sheets in the history of the Premier League.

Zanetti may have played in midfield for much of Mourinho’s time with Inter Milan but he earns inclusion in his more traditional right-back role here, the Argentine the leader of the Nerazzurri as they completed the first treble in the history of Italian football.

One of the greatest servants in Inter’s long and proud history, Zanetti spent almost two decades with the club and won a host of silverware, including five league titles, four Coppa Italia trophies, the UEFA Cup and the Champions League.

Two of those league titles – alongside a first Champions League triumph for Inter since 1965 – came under Mourinho’s management, Zanetti a manager’s dream for his selfless style, dedication and impeccable consistency down the right-flank.

Ramos may not have made Mourinho’s own version of his dream XI, but it’s hard to leave out a defender who has made such an impression at arguably the world’s biggest club.

Ramos is the most capped player in the history of the Spanish national side and a magnet for success at club level, winning five La Liga titles and the Champions League on four occasions with Real Madrid.

The centre-back has long divided opinion given his renown shithousery and a penchant for the dark arts, but there is no disputing his talent. One of the best centre-backs of his generation, Ramos has often been the pantomime villain who has delivered when it truly matters.

The leader and figurehead behind Chelsea’s arrival in the big time, Mourinho inherited the talents of academy graduate Terry before building his formidable defensive outfit around the former England captain.

Terry became just the second defender of the Premier League era to be named as the PFA Player of the Year during the club’s title-winning campaign in 2004/05, before captaining the side to back-to-back championships.

Arguably the greatest centre-back in Premier League history and amongst the best players to have worn a Chelsea shirt, Terry won five league titles, five FA Cups and the Champions League amongst his honours during a career with the west London side that delivered 717 appearances in all competitions.

Iconic Duos: Chelsea’s impregnable pairing made of steel and silk, Terry and Carvalho

Cole made a controversial transfer to Chelsea from capital rivals Arsenal and enjoyed huge success after the switch to Stamford Bridge, winning each of English football’s domestic honours in addition to European success in the form of both the Champions League and Europa League.

Regarded by many as the greatest left-back of his generation, the 107-cap England international was twice named as Chelsea’s Player of the Season and provides the balance in a back four that would provide the defensive assurance Mourinho craves.

“Why put another layer of gold paint on the Bentley when you are losing the entire engine?” was the verdict of Zinedine Zidane, upon Real Madrid’s decision to sign David Beckham and allow Claude Makelele to depart for Chelsea.

The Spanish side’s loss quickly proved to be Chelsea’s gain as the understated midfielder played a key role in the club’s early triumphs of the Mourinho era, providing the defensive platform to allow the likes of Frank Lampard, Michael Essien and Michael Ballack to thrive.

So good he had the defensive midfield position redefined and colloquially referred to as the ‘Makelele role’, the former France international earns his inclusion as our midfield anchor.

An abundance of midfield options has left us scratching our heads to select just three, with the likes of Paul Pogba, Michael Ballack, Deco and Wesley Sneijder amongst the unfortunate few to miss out on this stellar line-up.

We’ve opted for the pinpoint passing of Xabi Alonso as our midfield conductor, the silky Spaniard amongst the finest deep-lying playmakers the game has seen.

Alonso was the midfield metronome as Real Madrid secured the La Liga title with a 100-point haul during the 2011/12 campaign, as an uncharacteristically free-scoring Mourinho side plundered a record-breaking 121 goals.

Alonso’s career saw him win four league titles in addition to Champions League triumphs with both Liverpool and Madrid, whilst he also lifted the World Cup and two European Championships during an international career that saw him win 114 caps for Spain.

The greatest pure goalscoring midfielder in Premier League history, Lampard was the driving force in Mourinho’s best Chelsea side and was named as the FWA Footballer of the Year during the club’s first title triumph.

Rarely has a player arrived into the box so relentlessly and with such perfect timing as Lampard, one of just three players in the entire history of the EPL to have reached a century of both goals and assists.

Chelsea may not have seen the very best of Arjen Robben due to injury problems during his time in the Premier League, but the glimpses of the winger’s vast potential indicated a huge future in European football.

Robben won back-to-back league titles under Mourinho before later heading to Real Madrid, but it would be in the colours of Bayern Munich where he would establish himself as a bonafide star.

The former Netherlands international scored a phenomenal 144 goals in 309 appearances for the Bavarians, winning eight Bundesliga titles and inspiring the club to an unprecedented treble in 2013.

Time and time again the winger would cut inside on his stronger left foot in trademark style, producing a brilliant – if slightly repetitive – highlight reel of stunning goals.

Defenders knew what was coming, they just couldn’t stop it.

Arjen Robben: The ‘one-trick pony’ who couldn’t be stopped

Whatever your opinion may be of Cristiano Ronaldo, there is simply no argument that the Portuguese superstar does not sit at the very top table of football’s greatest ever talents.

The record goalscorer in the history of Real Madrid, Portugal and the Champions League, Ronaldo has set countless records during a career that has included seven league titles, five Champions League trophies, five Ballon d’Ors and four European Golden Shoes.

It was Ronaldo’s 60-goal season that inspired Mourinho’s Real Madrid side to Spanish title success in 2012, a free-scoring Los Blancos outfit crowned champions following a season from their star forward that delivered 46 league goals in just 38 appearances.

Arguably the most competitive position on our team sheet, a list of some of the game’s greatest goalscorers of modern times makes up our list of more than able deputies.

Zlatan Ibrahimovic, Karim Benzema, Samuel Eto’o, Diego Milito and Harry Kane are just some of the players unfortunate to miss out on selection as our focal point, but no Mourinho side would be complete without the talismanic presence of Didier Drogba.

Drogba became the on-field embodiment of Mourinho’s ‘us against the world’ mentality, the Ivorian thriving as the spearhead of the most successful side in Chelsea’s history and regularly delivering on the biggest of occasions.