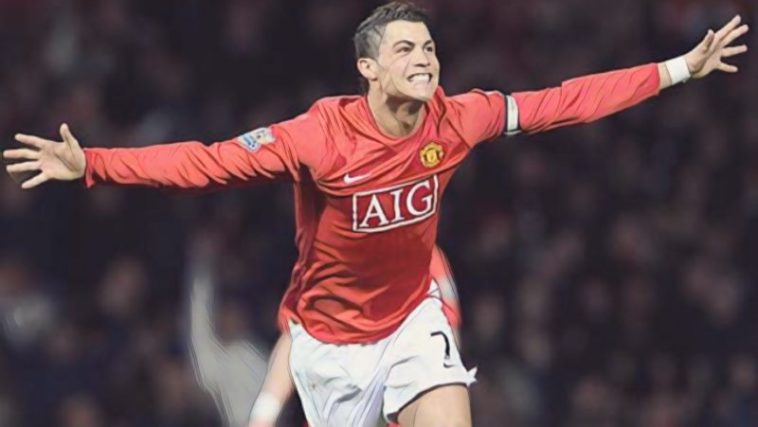 Cristiano Ronaldo’s status amongst football’s all-time greats is undisputed, the Portuguese superstar having established himself as one of the best players in history during a record-breaking career at some of Europe’s elite.

Ronaldo’s upward trajectory to the summit of the game truly accelerated following his move to English football as a raw but talented teenager, signing for Manchester United as an 18-year-old before developing into one of the world’s best players.

His initial six season stay under the guidance of Sir Alex Ferguson saw the forward win a host of team and individual honours, but it is throughout the 2007/08 campaign where Premier League fans were treated to the peak version of Ronaldo in a Manchester United shirt.

We’ve decided to look back and revisit his sensational season, remembering just how good Cristiano Ronaldo was for Manchester United in 2007/08:

The story of Ronaldo’s arrival at Old Trafford tends to circulate around the narrative of a pre-season friendly between the Red Devils and Sporting Lisbon, when the performance of the teenage winger left senior professionals clamouring for his signature and accelerated Ferguson’s interest in the Portuguese prodigy.

United – having missed out on chief target Ronaldinho to Barcelona – secured the signing of the youngster ahead of competition from the likes of Arsenal, with the gangly and somewhat awkward-looking Ronaldo wasting little time in making an impression.

His debut came as a substitute in an opening day victory over Bolton, when after labouring for much of the contest, the introduction of the summer signing lifted the performance of the hosts.

The Stretford End were treated to their first glimpses of the tricks, flicks and step-overs that would become Ronaldo’s trademark in his early seasons as United ran out convincing 4-0 winners.

The new arrival had made a promising start, with even the greats of the club’s history having taken note of the youngster’s uber-confident first display.

“There have been a few players described as the new George Best over the years, but this is the first time it’s been a compliment to me.”

Ronaldo’s early seasons saw steady improvements as he adapted to English football, scoring four league goals during his debut campaign before adding five the following season and nine the next.

Whilst the youngster’s progression was no doubt welcomed, doubts remained over his productivity with his tendency to show-boat drawing criticism, whilst there were also accusations of play-acting levelled at the developing Portuguese talent.

His first seasons in the Premier League had also seen a shift in the balance of power in England’s top tier, Arsenal’s ‘Invincibles’ reigning supreme during his first season before a billionaire-backed Chelsea claimed back-to-back titles under the guidance of Jose Mourinho.

Some had questioned whether United had the capabilities to return to their position as the Premier League’s dominant force, but Ferguson’s side – led by the emerging Ronaldo and equally irrepressible Wayne Rooney – soon removed any doubts.

The 2006/07 season proved a true breakthrough campaign for Ronaldo, scoring 23 goals in all competitions to help inspire United to a first league title in three years. Those who had criticised the winger’s end product were silenced as Ronaldo became the most influential player in the division, his performances recognised with a clean sweep of individual honours at the season’s end.

The 22-year-old became just the second player – after Aston Villa’s Andy Gray 30 years earlier – to win both the PFA Player of the Year and Young Player equivalent, and the first player in history to win six individual accolades in one campaign – adding the FWA Footballer of the Year and Premier League Player of the Season to his list of achievements.

Ronaldo had truly arrived in the Premier League, but ominously for top-flight opposition, he was only getting started.

Cristiano Ronaldo is the only player to win these six awards in a single season:

The following season saw Ronaldo reach the pinnacle of his time as a Manchester United player, though it is often forgotten that the season began poorly for both club and player, the defending champions failing to win in their first three fixtures of the season and Ronaldo suspended for three games after headbutting Portsmouth’s Richard Hughes.

The Portuguese scored his first league goal of the season in a 1-0 victory at Birmingham in late September, and it proved to be the start of an unstoppable run for the Premier League’s finest talent.

Ronaldo, quite noticeably, had changed.

The once skinny teenager had evolved into a hulking physical specimen, whilst the step-overs and tricks became less frequent. Ronaldo’s focus had shifted, the desire to become recognised as the world’s best – so often associated with the player today – had become abundantly apparent.

Playing alongside the aforementioned Rooney and summer signing Carlos Tevez in attack, the trio interchanged positions fluently in a three-pronged goal threat as good as any the division has seen.

Tevez scored 19 goals in all competitions following his arrival from West Ham, with Rooney hitting an additional 18, but it was Ronaldo who was the star of the show.

Highlights of his campaign included a first Premier League hat-trick against Newcastle at Old Trafford, in addition to one of the league’s greatest ever free-kicks against Portsmouth, a dipping effort which left goalkeeper David James both helpless and dumbfounded.

Ronaldo finished the Premier League season with 31 goals – becoming the youngest ever player to reach the 30-goal landmark – securing the division’s Golden Boot and helping United to a second successive league title.

His haul was also a Premier League record for a 38-game season at that time, levelling the achievement of former Blackburn Rovers forward Alan Shearer.

Ronaldo’s performances once again saw him crowned as the Premier League’s finest player, his burgeoning list of individual accolades added to with a second successive PFA Player’s Player of the Year and FWA Footballer of the Year double.

United had returned to their status as England’s dominant side, but conquering Europe remained on the agenda. The Portuguese superstar had scored five times in the Champions League group stages – including both home and away to former side Sporting – before scoring crucial knock-out stage goals against Lyon and Roma as United advanced to the latter stages.

That aforementioned goal in the Italian capital perhaps symbolised the evolution of Ronaldo, a towering header at the Stadio Olimpico that saw the forward defy gravity and demonstrate the incredible physical prowess he had harnessed through hours of dedication.

The forward powered home a cross from Wes Brown to put Ferguson’s side ahead, though Frank Lampard’s equaliser forced extra-time and penalties in a contest that also saw Dider Drogba sent off for the west London side.

The ensuing shoot-out almost changed the narrative of what had been a phenomenal campaign for Ronaldo, missing his penalty to allow John Terry the chance to seal the trophy for Chelsea.

As fate would have it, the former England captain slipped on a rain-soaked pitch in Moscow and United would be crowned European champions in sudden death, Edwin van der Sar saving from Nicolas Anelka to leave an overwhelmed Ronaldo in tears on the Luzhniki Stadium pitch.

Ronaldo finished the season with 42 goals in all competitions, his performances seeing the forward acknowledged as the winner of the Ballon d’Or for the first time later that year.

He became just the second player in the Premier League era to be recognised as Europe’s finest player, and the first player in history to win the prize alongside the PFA Players’ Player of the Year award.

Cristiano Ronaldo is the only footballer in the 45-year history of the PFA Players' Player of the Year award to also win the Ballon d'Or in the same year.

In that 2007/08 season, he became the youngest player to score 30+ goals in a 38-game Premier League season. pic.twitter.com/ZMqwxZDram

Ronaldo – alongside Barcelona’s Lionel Messi – has made 40-goal seasons routine over the past decade and more, but it seemed like an unfathomable number during a memorable season in 2007/08.

The forward would spend just one more season in English football – adding a third successive league title in the process – before embarking on a new journey following a world-record move to Real Madrid.

He went on to become the record goalscorer in the history of the Spanish giants and the Champions League, winning Europe’s leading tournament on four further occasions with Los Blancos before moving to Italy for a three season with Juventus.

Ronaldo’s legacy as one of the best players to ever play the beautiful game is assured and many of his greatest achievements came after leaving these shores, but the Premier League can take pride in the part it played in a spotty kid from Madeira evolving into a footballing phenomenon.

Now back where his ascent to the top began, Old Trafford looks like it will play the perfect bookend in the story of a sporting icon.