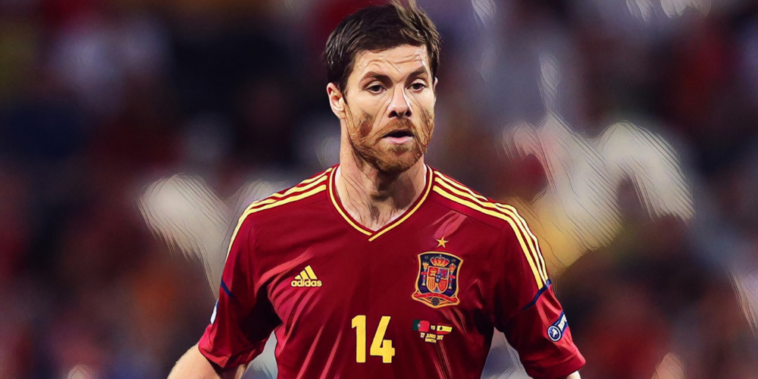 Spanish football enjoyed a golden age as the new millennium ticked towards its second decade, as a new age of footballers emerged and exerted an unprecedented manipulation of possession.

The success of the Spanish involved several central figures, but at the heart of La Roja’s defining period of dominance was Xabi Alonso, amongst the most talented of a crop of midfielders unlikely to ever again be produced simultaneously by one nation.

Alonso’s footballing venture began in the Basque region of Tolosa, born into a footballing family with his father, Periko, having twice won La Liga titles with Real Sociedad before earning a third winners’ medal upon signing for Barcelona.

Alonso quickly identified himself as a midfielder as he honed the technical side of his game, and alongside his brother, Mikel, followed in his father’s footsteps after being inducted into the Sociedad system.

He progressed through the ranks and was thrust into the senior side as an 18-year-old, though his debut proved one to forget as Sociedad suffered the ignominy of a home defeat to struggling second-tier outfit Logroñés in the Copa del Rey.

Alonso was sent on loan to Eibar for further experience over the opening half of the following 2000/01 campaign, a period which coincided with the midfielder’s father failing to turn around Sociedad’s faltering fortunes in a short-lived managerial appointment.

John Toshack was appointed as Alonso senior’s successor and opted to recall junior from his loan spell, with the promising starlet thrust into a relegation dogfight at the bottom of the division.

Alonso provided an assured presence that defied his inexperience at the base of the midfield, his performances in Sociedad’s climb from danger so significant that he was awarded the club captaincy whilst only recently out of his teens.

The trademarks of Alonso’s game – an accelerated perception of the game around him and crisp passing across all ranges – attracted interest from bigger clubs, with Real Madrid’s interest piqued after Alonso’s role in Real Sociedad’s surprise title fight against the capital giants in 2002/03.

Sociedad missed out on the title by the narrowest of margins and after failing to replicate those performances the following season allowed their most coveted asset to leave.

Liverpool won the race for Alonso’s signature, as Rafael Benitez looked to his compatriot during his first summer of overhaul at Anfield.

Alonso’s arrival on Merseyside came at a time when few Spanish imports had left a lasting impression on the Premier League, but he showed swiftly that he could adapt to the challenges English football presented.

Whilst never the quickest in foot, his speed of mind ensured he flourished in Benitez’s side, the frantic pace of the Premier League a perfect learning curve as he honed his metronomic talents.

Alonso had proven he could run a midfield during his time at Sociedad, but at Liverpool he had to show he could do so at an increased pace, with time in possession minimal and opposition challenges containing added bite.

He starred as Liverpool upset the odds to reach the Champions League final during the 2004/05 season, his calming influence in a deeper role complimenting the steel of Dietmar Hamann and the explosive drive of Steven Gerrard.

His continental class and control of proceedings helped Benitez’ pragmatic side nullify the threat of Juventus and Chelsea in the knockout stages, before a chaotic evening at the Atatürk Stadium in Istanbul saw Liverpool crowned European champions in unforgettable fashion.

Trailing 3-0 at the interval with Alonso overran in an uncharacteristically open midfield, Liverpool fought back to stage a stunning comeback with the Spaniard netting the equaliser at the second attempt from the penalty spot.

That night in Istanbul is characterised by several narratives, from Gerrard’s lung-busting drive to the heroics of Jerzy Dudek in goal, but Alonso’s improvement after the break – alongside a mental fortitude to take his first penalty in professional football in a Champions League final – was amongst the unsung tales.

FA Cup success followed in 2005/06 with Alonso scoring one of the goals of the tournament in the third round, a left-footed effort from inside his own half as Liverpool beat Luton 5-3 in a thriller.

Luton goalkeeper Marlon Beresford had joined the attack in desperate search of an equaliser, before a half-clearance finds Alonso’s feet.

Ignoring the calls from Gerrard to his left, the Spaniard executed a finish of perfect power and precision from just short of the centre circle to send the Reds through.

On the anniversary of his Reds debut goal, enjoy some of Alonso's stunners 😍 pic.twitter.com/UM505wLnhO

Far from a fluke, he netted a second goal from inside his own half two seasons later, a fantastic display of technique to arrow an effort over the back-peddling Steve Harper against Newcastle.

Alonso remained a key figure across the following seasons, though cracks appeared in his relationship with Benitez as the manager’s plans to add Aston Villa’s Gareth Barry to his midfield line-up caused unrest.

Javier Mascherano’s arrival had altered Alonso’s role in the side and the pursuit of Barry was deemed as an indication of the Spaniard’s diminishing importance to the side.

The deal for Barry failed to materialise and Alonso remained to enjoy an outstanding 2008/09, having formed part of the Spain squad that won a drought-breaking major tournament at Euro 2008 that summer.

He formed a brilliant two-man axis with Mascherano that allowed Gerrard the freedom to wreak havoc with Fernando Torres further forward, as Liverpool lost just two games across the entire Premier League season. However, an inability to turn draws into wins saw the Reds miss out on the title to Manchester United.

That season proved to be his final on Merseyside, as Real Madrid came calling once again as a second wave of Florentino Perez’s Galactico regime took place at the Bernabeu.

Cristiano Ronaldo, Kaka and Karim Benzema joined Alonso as new arrivals in the Spanish capital, as Real Madrid sought to combat the emerging force that was Pep Guardiola’s Barcelona.

His first season saw Real finish as runners-up despite a record points total, but his disappointment proved short-lived as Spain travelled to South Africa for the 2010 World Cup.

Alonso had struggled to command an automatic role in their European triumph two years earlier, but he was ever-present as Spain were crowned world champions for the first time.

The triumph of Vicente del Bosque was a celebration of control and dominance, as Spain passed their opposition to submission and tiki-taka conquered.

Alonso was at his ethereal playmaking best, rarely roaming far from the centre circle as he sprayed passes with lasered precision across the South African pitches.

That summer also saw the arrival of Jose Mourinho as manager of Real Madrid, an appointment which helped Los Blancos oust Barcelona in the battle for Spanish supremacy.

The Copa del Rey was won during Mourinho’s maiden season, before the 2011/12 campaign brought a host of divisional records and a first league title winners’ medal to add to Alonso’s ever-growing collection of honours.

Euro 2012 brought a third consecutive major tournament success for Spain with Alonso named in the Team of the Tournament, a match-winning double against France in the quarter-finals the highlight of a campaign that saw La Roja make unprecedented history.

Real’s revolving door of managers also continued, with the arrival of Carlo Ancelotti providing a coolness in the often blistering heat of the Bernabeu hot-seat.

Ancelotti – with Alonso as fulcrum of his engine room – led Real to a historic tenth Champions League title during the 2013/14 season, though La Decima was secured despite the absence of the suspended Alonso for the showpiece.

To the surprise of many, the midfielder was allowed to leave that summer for Bayern Munich, a move which united one of football’s finest minds with one of the game’s great midfield dictators.

In Pep Guardiola, Alonso viewed his new manager as a man who shared his footballing principles and together the duo enjoyed huge success as back-to-back Bundesliga titles were secured.

The Catalan’s blueprint proved the perfect match for the ball-playing Basque native, who orchestrated the symphony of a Bayern side with little genuine competition on home soil.

Alonso earned a third Bundesliga winners’ medal under the guidance of former manager Ancelotti during the 2016/17 season, before deciding to hang up his boots for the final time.

His curtail call came with a substitution during a 4-1 win against Freiburg, as football waved goodbye to a footballer often worth the admission fee alone.

Elegant in his manner and expansive in his passing, Alonso quietly became one of the best midfielders of the modern era.