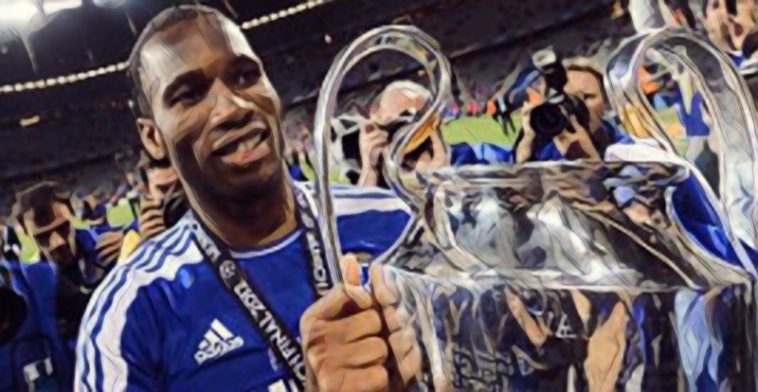 An ability to influence the biggest of occasions is often what separates the game’s greats from the mere mortals, an ability on which Didier Drogba built his legend at Chelsea.

The Ivorian icon became the ultimate big game player during a glittering career at Stamford Bridge, scoring in a succession of cup finals goals during two spells in west London that delivered 12 major honours.

Few players can claim to be as decisive amidst the pressures of football’s biggest games, and we’ve decided to pay homage to Didier Drogba’s sensational cup final record.

Cometh the hour, cometh the Drog.

Drogba’s first opportunity to win silverware in English football came after Chelsea reached the final of the League Cup during his debut season at the club, where Jose Mourinho would face off against Liverpool’s Rafael Benitez in the battle of the Premier League’s latest high-profile managers.

The clash at the Millennium Stadium could hardly have began worse for the west London outfit, John Arne Riise netting a thunderous volley for the Merseyside club within the first minute in Cardiff.

Steven Gerrard – who Chelsea were trying to sign at the time – scored an unfortunate own goal to prompt memorable celebrations from Mourinho and force extra-time, where Drogba showcased his big-game temperament for the first time.

The forward put Chelsea ahead in the extra period after turning home Glen Johnson’s long throw-in from close range, Mateja Kezman scoring a third as the Blues eventually secured a 3-2 win and the first trophy of the Mourinho era.

Drogba proved to be the scourge of London rivals Arsenal throughout his time as a Chelsea player, possessing a brilliant goalscoring record against the Gunners including a match-winning salvo during the 2007 League Cup final.

Chelsea had emerged as the dominant force in English football after winning back-to-back Premier League titles under Jose Mourinho and the club had the opportunity to win a fourth trophy in just three seasons in the Welsh capital.

Theo Walcott’s early goal had threatened to spoil the party, however, but just as they had done two years earlier, Chelsea came back to secure the trophy courtesy of an inspired performance from the talismanic Drogba.

Chelsea completed a domestic cup double courtesy of FA Cup success later in the season, Drogba writing himself into the history books by netting the first cup final winner at the new Wembley Stadium.

Manchester United – who had beaten the Blues to the Premier League title – were the opposition and seeking a domestic double, though it was Drogba who once again settled a tense final to add further silverware to a burgeoning trophy cabinet at Stamford Bridge.

The clash had finished goalless in normal time following a largely forgettable encounter in the capital, only for Drogba to provide one of the game’s few moments of quality to seal the trophy.

The forward played a brilliant one-two with Frank Lampard on the edge of the United penalty area, before cooly poking the ball past the onrushing Edwin van der Sar to spark wild celebrations amongst the travelled Chelsea contingent.

Chelsea made it three League Cup final appearances in just four seasons after once again progressing to the showpiece in 2008, where they once again faced London opposition in the shape of Juande Ramos’ Tottenham.

Drogba became the first player in history to score in three separate finals of the competition after netting a brilliant free-kick to open the scoring, but unlike on previous occasions his contribution was not enough to secure success for the Blues.

For Drogba, it was part of a series of near misses for the club during the season, Chelsea also finishing as runners-up to Manchester United in the Premier League, Champions League and Community Shield.

Another cup final comeback for Chelsea and another cup final goal for Drogba, Guus Hiddink’s side recovered from conceding the fastest goal in FA cup final history to win the trophy for the second time in three seasons.

One year later and Chelsea were back at Wembley bidding to defend the FA Cup, where they would face a Portsmouth side competing in their second final in just three seasons.

Portsmouth’s financial issues had contributed to the club finishing bottom of the Premier League and Chelsea – who had claimed the league title with a record 103 goals scored – were expected to make minimal fuss in dispatching their troubled opposition.

The pressure of cup finals can often prove an unlikely leveller, however, and a tight contest needed inspiration from Drogba once more to seal a first ever domestic double for the west London outfit.

The cup final King netted a superb free-kick to score the only goal of the game, a contest which became the first FA Cup final in history to see both sides miss a penalty courtesy of spurned spot-kicks from Kevin-Prince Boateng and Frank Lampard.

Drogba’s winner capped a remarkable season for the forward, who finished with 37 goals in all competitions and won the Premier League’s Golden Boot for a second time.

‘The King of Wembley’ was once again up to his old tricks as Chelsea met Liverpool in the 2012 FA Cup final, scoring in a record fourth showpiece as Roberto Di Matteo’s side ran out 2-1 victors at the national stadium.

Ramires opened the scoring for the Blues with an early goal after racing through one-on-one with Pepe Reina, before Drogba doubled Chelsea’s advantage with a well placed finish early in the second period.

Andy Carroll pulled a goal back for Liverpool shortly afterwards, though the Londoners would hold on to secure a fourth FA Cup success in just six seasons, Petr Cech’s incredible save from the aforementioned Carroll denying the Reds a late equaliser.

The game in which Drogba’s legacy will forever be associated with, the forward completing his Champions League redemption as Chelsea became the first London side ever to win the Champions League.

Four years earlier, the Blues had reached the final of Europe’s leading competition only to lose to Premier League rivals Manchester United in Moscow, Drogba memorably sent off as Avram Grant’s side lost on penalties on a rain-soaked evening at the Luzhniki Stadium.

Chelsea reached the final once more in 2012 where they faced the daunting prospect of facing Bayern Munich at their own Allianz Arena, and it looked like heartbreak once more for the club after Thomas Muller opened the scoring with just seven minutes remaining.

As the clock ticked down in Munich, however, Drogba delivered once more in emphatic style, powering home an 88th-minute bullet header to force the contest into extra-time.

Petr Cech’s penalty stop from Arjen Robben in the added period kept the scores level and forced a shoot-out, where Chelsea would prevail 4-3 – Drogba confidently rolling home the winning spot-kick to cement his legendary status at Stamford Bridge.

When we think of Chelsea 🆚 Bayern…

We think of the Didier Drogba final of 2012!

The bullet header and the ice cool penalty to win the Champions League for the Blues 🏆💙 pic.twitter.com/H6dSsG58vl