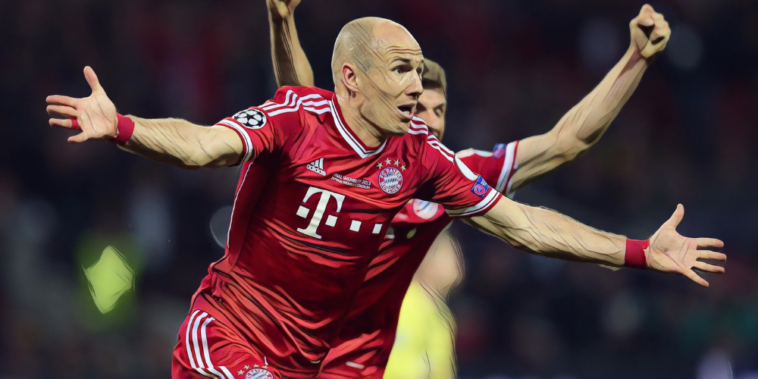 Arjen Robben has announced his retirement from professional football for a second time, hanging up his boots following a brief return to football with first club Groningen last season.

Robben’s retirement brings an end to the career of one of Dutch football’s finest modern talents, a footballer who scaled huge heights and played the game with a devastating simplicity that proved impossible to stop.

His career began where it eventually finished in his native Holland with FC Groningen, coming through the club’s academy ranks as a wiry-framed winger, making his debut as a 16-year-old and quickly capturing attention.

The raw attributes that defined Robben’s career were swiftly evident as he made 18 appearances during that maiden campaign, his scintillating speed tormenting opposition full-backs.

The following season saw the youngster score six goals to help Grongingen avoid relegation to the Netherlands’ second tier and predictable interest from further up the division soon arrived, Robben signing for PSV and enjoying immediate success in Eindhoven.

Forming a brilliant partnership with Serbia international Mateja Kezman that became affectionally referred to as ‘Batman and Robben’, the winger scored 12 goals and provided seven assists as PSV reclaimed the title from Ajax – being named as the Eredivisie’s best player aged under 21.

His second season proved less successful as the injury problems that plagued much of his career began to surface, but the dynamic Dutchman was already being tipped for bigger things as England’s elite began to circle.

Manchester United and Sir Alex Ferguson held talks with the teenager over a move to the Premier League, but as the Red Devils stalled over the player’s price-tag, big-spending rivals Chelsea moved swiftly to secure his signature.

“I had a very good conversation with him (Ferguson) over dinner in Manchester and we spoke about football and life. I also went and had a good look around the training ground and everything was good, but after I went back to PSV nothing happened.

“There was no real contact and the deal didn’t happen. PSV were also negotiating with Chelsea at that time, so maybe they offered PSV more money? I don’t really know. I spoke to Chelsea and I liked their plans. We had one meeting and everything was done pretty quickly.

“Had Manchester United offered me a deal straight after I met them, I would have signed there, but it didn’t happen and I have got no regrets.”

Chelsea’s fortunes had been transformed by the billionaire takeover of Roman Abramovich a year earlier, with Robben arriving in the summer of 2004 as part of a recruitment drive under new manager Jose Mourinho.

A broken metatarsal in pre-season stalled his start at Stamford Bridge, but after returning to the side in October he began to star as Mourinho shifted away from English football traditions of a 4-4-2 system.

With Robben and Damien Duff operating either side of lone forward Didier Drogba, Chelsea cruised to a first league title in 50 years, losing just one Premier League fixture as a new era of success was ushered in in west London.

Robben scored seven goals and provided nine assists to be named in the PFA Team of the Year, before impressing once again as back-to-back league titles were secured.

His third season proved a frustrating campaign despite a domestic cup double, scoring just two league goals in a stop-start campaign for the Blues.

Despite those frustrations, it came as a surprise given the player’s potential and performances when Chelsea accepted a fairly modest £24m bid from Real Madrid for his services, with Robben heading for Spain where further success would soon follow.

After a slow start he grew in importance as Los Blancos secured the La Liga title in 2007/08, before scoring eight goals in all competitions during an impressive second season in Spanish football.

However, Florentino Perez’s return as president in 2009 led to a second wave of the Galactico recruitment policy, the summer signings of Cristiano Ronaldo, Kaka, Karim Benzema and Xabi Alonso leading to Robben’s departure as the Spanish giants sought to cover costs.

His debut season proved the most productive of his career as he was named as Germany’s Footballer of the Year, scoring 23 goals in all competitions as Bayern secured a domestic double.

Robben’s success was intertwined with heartbreaking near misses, however, as Bayern were denied the chance of a historic treble after losing to Inter Milan in the Champions League final, whilst further agony followed after the Netherlands’ World Cup final defeat to Spain that same summer.

Despite Borussia Dortmund’s emergence as Germany’s dominant force over the next two seasons, Robben continued to go from strength to strength as the dynamic Dutchman formed one half of a devastating duo alongside fellow winger Franck Ribery.

In an era where inverted wingers truly began to thrive, the pairing flourished in Bavaria as they drifted inside to cause chaos against Bundesliga defences.

Robben’s game was one comprised of such sublime simplicity, his utter and complete one-footedness leading to a repetition of the winger coming inside and taking sight of goal.

A lack of diversity in a footballer’s game would more frequently lead to being found out at the highest level, but Robben’s ability to come inside and score spectacularly was the mastering of a movement that left defenders dizzy.

There proved more heartache for the rampaging Robben before he truly reached his zenith though, a missed extra-time penalty in the 2012 Champions League final proving costly as Bayern were beaten by former side Chelsea at their own Allianz Arena.

Bayern bounced back the following season in some style however, as Jupp Heynckes’ side swept all before them to win a domestic double and reach a second successive Champions League final.

Robben had been plagued by familiar fitness issues during the opening months of the 2012/13 campaign, but returned to inspire Bayern’s passage to the showpiece, scoring in both legs of a 7-0 semi-final destruction of Barcelona.

Borussia Dortmund awaited in the first ever all-German final meeting, though it was Robben and Bayern who were left celebrating as their Dutch dangerman produced arguably his most iconic moment.

Just seconds remained at Wembley as extra-time loomed with the scores level at 1-1, before Robben burst into the box to collect Ribery’s backheel and roll a dramatic late winner beyond Roman Weidenfeller.

Euphoria ensued as the winger wheeled away to celebrate in front of the raucous red contingent behind the goal – this was Robben’s redemption and a moment that crowned Bayern champions of Europe for the fifth time.

The following campaign saw Robben hit a career-best of 17 league goals as Bayern embarked on a period of unprecedented dominance in Germany, winning each of the next six Bundesliga titles in succession.

For a player whose career was riddled with niggles and knocks it is a testament to Robben that his career contained such longevity, remaining a key component of the side until his departure in 2019.

He departed the Allianz Arena as one of the club’s genuine greats of the modern era, having scored 144 goals in 309 appearances and won eight league titles, five DFB-Pokal trophies and that aforementioned Champions League amongst his honours.

A romantic return to Groningen ultimately led to more time on the treatment table before eventually hanging up his boots for good this week, waving goodbye to the sport as a title winner in four countries and as one of the Netherlands’ all-time greats with 37 goals in 96 appearances at international level.

Electric when at his very best, Robben was the proverbial ‘one-trick pony’ who proved unstoppable at the peak of his powers.