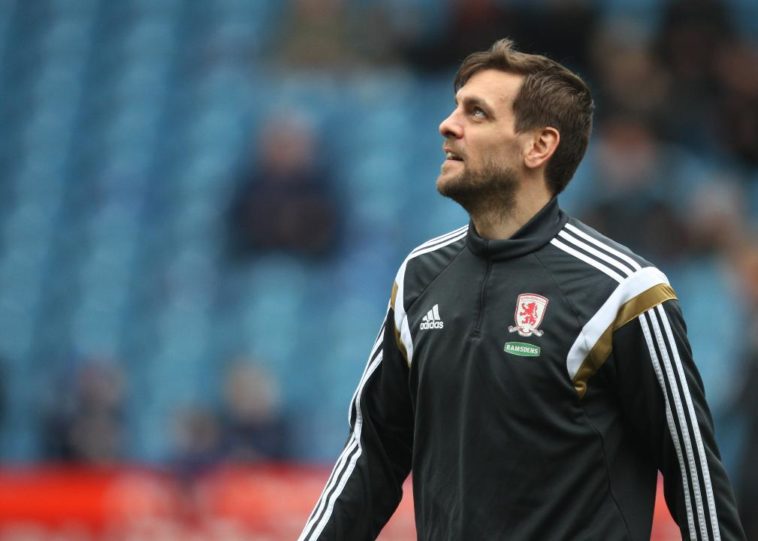 Jonathan Woodgate is back at Boro. Could this be the catalyst for Premier League survival.

I originally started making notes to write a piece on England’s latest defensive addition – Ben Gibson. The story of a local lad done good, now representing his hometown on the international stage. His career continues to go from strength to strength. A great story, one that’s been well told this last few days, and rightly so. But it was another Middlesbrough born man who switched my focus.

Whilst Gibson’s career is still in its relative infancy, Jonathan Woodgate’s playing career has been over for a couple of years now. He may well have been on the payroll as a player last season, but one League Cup appearance was the sum total for a defender whose playing days had really ended the season previous.

A rousing, rapturous crowd cheered his late introduction in the Play-off Semi Final win against Brentford, then manager Aitor Karanka seeing the game as an opportunity to give the Boro crowd a chance to show their appreciation for the veteran skipper.

Karanka said: “I thought that he deserved to finish the season on the pitch playing because he’s an idol here, the crowd love him, and he loves this club. Now we have to speak and once again I am going to do what Woody wants because he’s the captain, he’s a legend here, he’s the spirit of the team, so he’s the best.“

All that was on the back of the humongous high felt by all ahead of what turned out to be a doomed Wembley final against Norwich. It was following that game that Woodgate’s final season as a player came to an end. Or so we thought anyway.

Whilst never going to be a key fixture in the team, he was brought back into the fold, joining the club on their bi-annual trip to Marbella. His experience and connection with his teammates, an old head among the squad, was seen as a worthy reason for handing him a one year contract.

Cynics suggested he was brought back as a sweetener in the deal to bring another local hero, Stewart Downing, back to The Boro. The duo, connected by Woodgate’s long-term relationship with Downing’s sister, would be teammates as well as family.

Whatever the reasons behind his return, it would be off the field where he did most of his work. His involvement with the academy teams, allied with his studying for the required coaching badges, showed just where Woodgate saw his career going.

Back in 2014 he was already showing a keen eye on the coaching/management side of football.

“I’m already learning from the best here with our manager. He’s got some track record hasn’t he, being an assistant at Real Madrid, working with Jose Mourinho and quality players? And I’m learning every day from him. I’m taking notes after sessions, little pointers on how he conducts himself. It’s a good way to learn.“

Fast forward to May 2016, following Boro’s triumphant return to the Premier League, Woodgate made the decision to retire for good.

In a slightly surprising move, and with no job on offer for him at The Riverside, he stepped into his first non-playing role as a scout at Liverpool. His work would take him mainly to Europe, most notably Spain and Portugal.

Of course, Spain holds no surprises for him given his time at Real Madrid, and his job would see him scouring their leagues for latest crop of talent. Not a bad job you would think. However, after less than a year, the Boro boy is back!

The appointment of Joe Jordan has been seen as a wise move. An old head to compliment the relative inexperience of Agnew. Paul Jenkins has since been promoted from the U23’s to work with the first team, which represents a familiar, if not spectacular move. But it’s Agnew’s latest appointment that’s split opinion among Boro fans, not for the first time this season.

Jobs for the boys?

The appointment of Woodgate as First Team Coach has understandably raised some eyebrows. With no prior coaching experience at that level, some have seen his arrival as nothing more than a ‘jobs for the boys’ type of approach.

His origins and bond with the players give some fans reason to believe it’s a move made out of convenience. A cheap option and one that will satisfy those who see Boro as a small, local club. But it’s that bond and his affinity to the area that make some fans see the total opposite view.

Surely, in a time of crisis, with the club needing togetherness and heart, a local lad in an influential position such as First Team Coach is a good thing?

With the club having had a Spanish flavour these past few years, there’s a perception, that Middlesbrough are reigning in their ambitions since Karanka’s departure.

Having tried their hand at the exotic approach of foreign management, they’re now resorting to tactics of old, recruiting Agnew and Jenkins from within. Add Woodgate into the mix, and it leaves some Boro fans drawing comparisions to Bryan Robson, Steve McClaren and later, and less successfully, Gareth Southgate.

Robson and McClaren took Boro to levels they’d never been, and no fan would begrudge them of the status they have in the history of the club. But for some, that’s not the point. The point is they feel Boro have come a long way from being the managerial start-out for rookie bosses. They now instead have a commanding position in the game that allows them to cast their net wider. The clamour for glamour has seen names such as Guus Hiddink, Roberto Mancini, Claudio Ranieri and Harry Redknapp being suggested by sections of the Boro support.

Preparing for the drop?

The fear for some is that Boro are openly relinquishing their Premier League status and planning for a season back in the Championship next time out. On the other hand, the optimistic of the Boro faithful see Woodgate’s appointment under Agnew as something to be celebrated. His feelings for the club, and no doubt his dismay at their current position, will fuel his desire to help get the team going again.

He will command respect from the players, whilst also providing Agnew with that buffer between himself and the squad. The step up to No.1 will have seen him having to withdraw slightly from his role as ‘good cop’ to Karanka’s bad, which is surely where Woodgate comes in.

He will have the players’ ear. He will be able to communicate any issues to the Caretaker Manager, whilst also being in a position to coax perhaps that extra 10% out of them through the relationships already forged.

As well as his badges and coaching experience, admittedly limited thus far, he’s also worked under some talented managers. The likes of the late Bobby Robson, Fabio Capello, Juande Ramos and Harry Redknapp will have all rubbed off on him. He will have even learnt a fair bit from Karanka during his time at Boro too.

On the face of it, it would seem a risky strategy to employ a rookie coach in such an important position. For the fans already underwhelmed at the prospect of Agnew becoming Head Coach on a full time basis, the arrival of Woodgate into the mix has done nothing to allay the fears of those who feel the club is taking a step backwards.

Steve Gibson has always been a chairman whose mind is very much thinking forward though, and any appointment made is always after great thought and consideration. He’ll know what Woodgate can offer, and in all fairness Gibson rarely gets it wrong, so he’ll have had no doubts about sanctioning such a request from Agnew. With 10 games to go, time is running out. Players need to be on their game now, more so than ever before. Nobody is suggesting they stopped playing for Karanka, I really don’t feel that was evident. However, what was evident was the enthusiasm, that punch from their game, that had waned.

If someone of Woodgate’s standing among the players can help foster the spirit required to see the players perform to the best of their abilities, it will have been an inspired decision to bring him back. The bond he has with vital members of the squad will not have gone unnoticed. Any way that could be exploited to gain vital advantages, such as the players responding positively on the pitch, will have been at the forefront of any decision to bring him into the backroom team.

Let’s not forget also, Woodgate’s Madrid days will make him an ideal outlet for the Spanish nationals/speakers in the squad. Despite his time at Real not being a total success, he learnt the language, using it as often as he could in his time there. That sort of thing leaves a lasting impression. Something no doubt seen in a positive light by Alvaro Negredo and co.

Any upturn in fortunes will rightly see Agnew receive the lion’s share of the plaudits, but you’d have to think Woodgate will have played a huge part in that also. The Swansea game at The Liberty Stadium this coming Sunday represents the new/temporary management team’s first chance to demonstrate any changes made. The 3-1 home defeat to Man Utd was seen as a ‘free hit’ for Agnew given the lack of time he had to prepare – the Swansea game, however, won’t afford him and his staff the same courtesy.

They have a lot of hard work to do to convince the fans seeking more adventurous, ambitious appointments, that they have what it takes to get Boro out of the bottom three. One thing’s for sure though, there’ll be no shortage of effort and determination to get things right.

For Woodgate himself, he’s a proud Middlebrough man. Should Boro retain their Premier League status, you can’t imagine there’ll be too many at the club more proud than him.

Please support Football Faithful by sharing this article on social media. Also, if you are passionate about Middlesbrough and are interested in writing, please join our growing writing team.

Great read Ian.
From your long suffering farther ha ha, it won’t be long before you are buying a Boro shirt for your son Lucas and you never know your little daughter Lucy .⚽⚽ UTB.