Injured since October. Out for the rest of the season. Has Erik Lamela’s rollercoaster ride of a Tottenham career come to an end?

It’s fair to say Lamela has had an up and down Tottenham career. However, the recent news that the Argentinian will miss the rest of the season could spell the end of his time in North London.

Lamela was brought into Tottenham on the back of the sale of Gareth Bale. He was given Bale’s number 11 shirt and it was hoped he would have the same effect as the Welshman. But that wasn’t to be the case straight away.

After two disappointing seasons at the club, last term the winger finally established himself as one of Spurs’ key men in their title challenging side.

Many fans will find it hard to even remember what Lamela looks like, yet alone recall what he gives to the Spurs side. However if it were not for the form of Heung min Son, Lamela’s absence would have been felt significantly more. Not only have Spurs been missing Lamela’s creativity, his effortless work rate was key to Tottenham last season.

In big games, Lamela could always be counted on. He scored a crucial goal against Manchester United last season and assisted Eriksen’s winner at the Etihad.

Recently, Lamela liked a tweet suggesting that he will never play for the club again, and this is looking likely. Lamela’s exit will not be as a result of his poor performances though. It will purely be down to his injuries and other players taking their opportunity.

Lamela’s plight has also not helped by Pochettino’s decision to move to a three at the back. The Argentine now has to get past Christian Eriksen and Dele Alli to start a game. An unlikely feat. This coupled with Son’s form, in a season where he has scored 14 goals in all competitions, makes Lamela’s future at the club even bleaker.

The vast majority of Spurs fans will be wanting Lamela to stay at the club, who has slowly established himself as a fans favourite. However, the likelihood of this is decreasing, especially given the recent news of his injury. 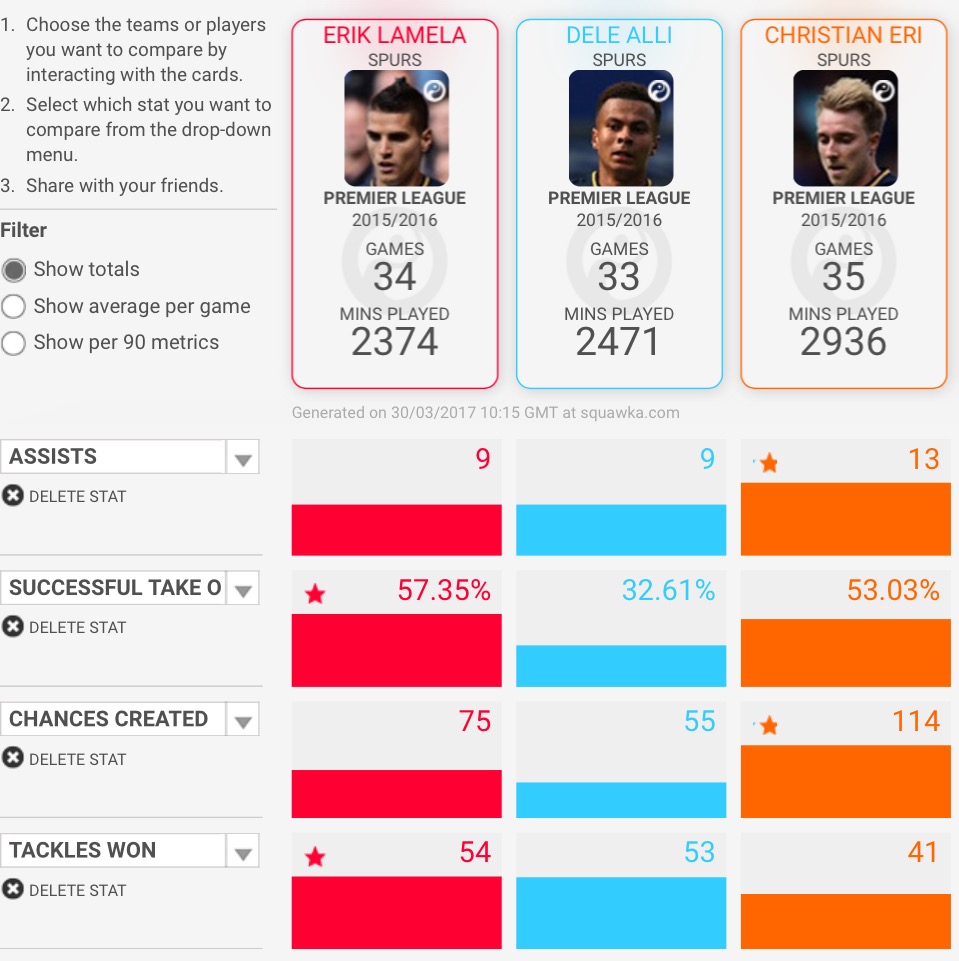 Lamela had a very successful season for Spurs. Whilst Dele Alli got the plaudits after scoring ten goals, Lamela’s work went very much under the radar to many.

A highlight by the Sqwawka Comparison Matrix above, Lamela had more successful take-ons than his teammates, as well as winning more tackles. He created 75 chances, 20 more than Dele Alli, and provided nine assists. All this despite playing less minutes than either of his teammates.

If Lamela does leave Spurs as expected, he will be sorely missed at the club where he has experienced plenty of ups and downs.