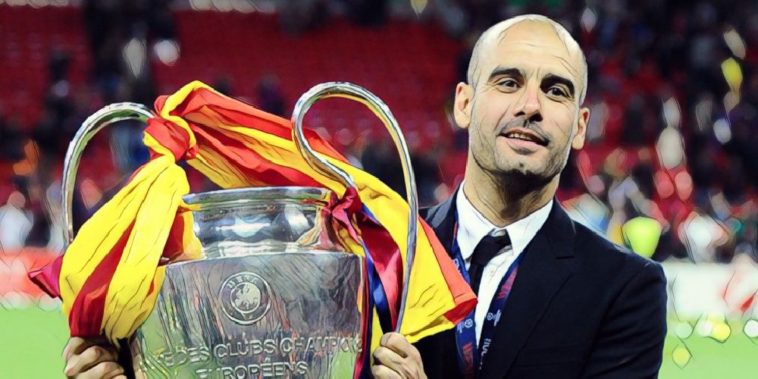 Joan Laporta admits he would like to bring Pep Guardiola back to Barcelona if he is successful in the club’s presidential elections next year.

Laporta is amongst the candidates to become president at the Camp Nou next year and is seeking a return to the role he previously occupied for seven years between 2003 and 2010, an era which saw the beginning of a golden period for the club, and the appointment of a young Guardiola as manager.

Guardiola emerged as arguably the finest manager in world football during a four-year spell in Catalonia, winning a host of major honours including three La Liga titles and the Champions League twice, including a historic treble in 2009.

Since then the Spaniard has won a further five domestic leagues during spells at Bayern Munich and Manchester City, and Laporta has now revealed his ambitions plans to lure Guardiola back to Barcelona should he be re-elected as club president.

“I’m working to introduce myself as a presidential candidate,” Laporta told TV3. “I’ve been president before and I’m excited to be back. The situation in 2021 will be dramatic and we’ll have to reverse it. I’m working with people I trust.

“I would very much like Guardiola to come back, but now he is at City and it is a decision that Pep should take. He is a benchmark for Barcelona and many Catalans would like him to train Barca again.

“At the right time, I will speak to the person we think should be a Barca coach from 2021.”

Laporta’s desire to re-hire Guardiola may not be so straight forward though, the Catalan suggesting back in 2014 that he would never return to his role at the Camp Nou.

“In principle, I won’t coach Barça again. I think that there are cycles in life and that mine [at the club] finished.”

Moments that made the Premier League: Manchester City are reborn after Abu Dhabi takeover