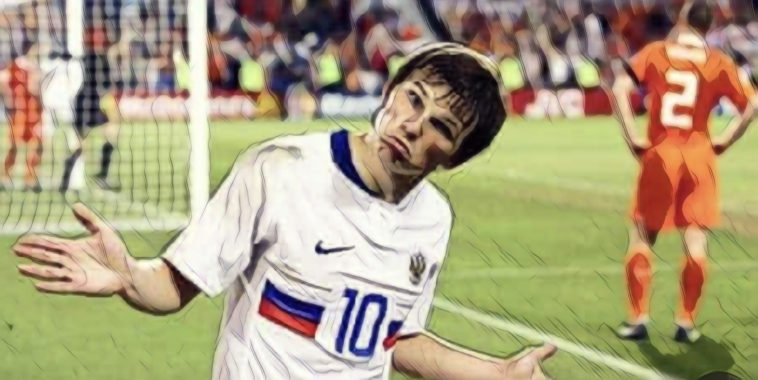 Mary Shelley’s Frankenstein illuminates many truths about the modern world. Among them, her cautions on the pitfalls of science are the most profoundly relevant. Experiment at your peril!

Viewed under the microscope, Andrey Arshavin’s iconic performance against the Netherlands at Euro 2008 rings true. The Russian playmaker’s spellbinding display was the product of Dutch innovation – a defeat of their own design. The raw Leningrad-born talent was assembled by a pair of Dutch tacticians – both of whom held the key to unlocking his monstrous talent.

After joining Zenit St Petersburg’s academy at the age of seven, Arshavin’s development stalled during his early teen years. His coaches lamented his diminutive physique, poor application and erratic temperament. However, as he moved into adulthood his technical ability blossomed, and by age 21 he had cemented his place in the first team.

In 2005, after acquiring a controlling stake in Zenit, energy giant Gazprom signalled their lofty intentions by appointing former Netherlands boss Dick Advocaat. The managerial journeyman, along with assistant Cor Pot, injected a shot of professionalism into the setup. Arshavin, a notorious loose cannon, struggled with the new regime and after a night out clubbing, Advocaat benched him.

Although the debacle created an unreconcilable schism between the two, the following season Arshavin, being in fine fettle, helped Zenit clinch the Russian Premier League title. More success followed, with Arshavin reaching his zenith for Zenit in the 2008 UEFA Cup final. The man affectionately nicknamed ‘Shava’ (the little dog) by his teammates was best in show as his side comfortably dispatched Rangers.

The great Andrei Arshavin has announced his retirement from football, lets take a look at his 2⃣0⃣ best Zenit goals⚽️🔥#Legend #Goals pic.twitter.com/E0UxrAxpVG

Just as Zenit and Arshavin’s meteoric rise were a product of Advocaat’s shrewd guidance, the Russian national team’s emphatic return to international form was the brainchild of another Dutch manager – Guus Hiddink.

When failing to qualify for the World Cup in 2006 the Russian Football Union shelled out €2 million a year on the serial overachiever. Following the dissolution of the Soviet Union in 1991 the Russian Federation had disappointed at major tournaments, and Hiddink was tasked with creating their new identity.

Russia’s qualification for the tournament went down to the wire. Hiddink’s men emerged from the group thanks to a cagey 1-0 win against minnows Andorra. However, qualification came at a cost. With just six minutes remaining 27 year-old Arshavin’s inner Mr Hyde reared its ugly head and he was dismissed for an unnecessary foul.

A two game suspension left Hiddink with a selection headache, but in reality, there was little decision to be made. Knowing full well Arshavin might play in only one group match he didn’t hesitate to include his most gifted player. In his words, “When you have a player of this quality, someone who makes such a difference, you play him when you can.”

Russia were drawn in a challenging group alongside eventual champions Spain, unlikely holders Greece and a Swedish side spearheaded by Zlatan Ibrahimović. Hiddink’s men, deprived of their talisman, arrived in Innsbruck short on tournament experience and with little expectations of success. After a 4-1 thrashing at the hands of Spain in their group opener, Konstantin Zyryanov’s solitary goal earned Russia a deserved 1-0 victory over Greece.

Arshavin returned to make a telling impact against Sweden at their showdown. The little maestro dictated play, scored a decisive goal and picked up the man of the match award. A meeting with a side Arshavin dubbed “the strongest team in the tournament” awaited them in the quarters – Marco Van Basten’s Netherlands.

The talk on the streets of the old Swiss border town of Basel – at least amongst Russian fans – was of revenge. At Euro ‘88 the Soviets had reached the final only to be undone by that memorable strike from an impossible angle by Van Basten.

The Dutch had steam-rolled their way through the competitions group of death, dispatching World champions Italy 3-0 and then dismantling France 4-1. Having rested most of his first-choice players in their final group game, Van Basten returned to his strongest line-up for the knockout stage.

Ninety thousand Netherlands fans descended on the city that sticky and humid June evening in Basel. The Oranje enjoyed a similar show of support inside the St Jacob-Park stadium, with the sea of orange drowning out a comparatively tiny raft of vocal Russian supporters.

The match began with both sides tentatively probing one another. Hiddink’s men were the more enterprising of the two. Russia attacked with vigour, finding joy through Arshavin down the flanks. The magician, who cut such an unassuming figure – with his crude haircut and youthful features – was at his bewitching best.

Despite a Dutch resurgence towards the end of the half Russia shaded the contest and deservedly took the lead in the second. Arshavin, picking up the ball in midfield, laid the ball out wide to his captain Sergei Semak – the 32 year-old’s pinpoint delivery expertly volleyed home by the impressive Roman Pavlyuchenko. Arshavin terrorised the Dutch defence throughout and created numerous chances to extend the Russian’s lead.

Van Basten’s side looked laboured and struggled to rediscover the fluidity that had made them so prolific. As they piled forward in search of an equaliser they relied heavily on their captain Edwin van der Sar to keep them in the contest. With four minutes remaining, in a moment of Russian naivety, the Dutch hauled themselves level thanks to poacher extraordinaire Ruud Van Nistelrooy.

In extra time Hiddink’s men showed no signs of demoralisation and proceeded to dominate the encounter. It was the Dutch, who had five additional days of rest, who fatigued. Pavlyuchenko and Dmitri Torbinski went close to scoring, before Arshavin produced two match-winning moments of genius in the dying embers of the game.

With the game stretched, and both sides out on their feet, Arshavin picked up the ball on the half-way line. As Dutch defender André Ooijer backed off Arshavin advanced further, making his way into the box. Twisting and turning he engineered space for a cross, before clipping a tantalising ball over the head of Van der Sar and into the path of the onrushing Torbinski who finished with a clever back heel.

Before they could shout ‘O mijn God’, the Dutch had conceded again.

Four minutes later, with a devilishly clever piece of movement, Arshavin sneaked in behind the Netherlands back line and latched on to Aleksandr Anyukov’s lengthy throw-in. Moving towards the ball and then allowing it to beat him, Arshavin deceived the hapless Oijer once again. After bamboozling the defender, the resplendent Russian fired a low drive through Van der Saar’s legs and setlled the tie.

When the final whistle blew chants of “Rus-sia” rang around the eerily silent St Jacob-Park stadium. As his teammates embraced each other Arshavin, utterly spent, collapsed to the ground.

Despite being the best player on the park he was commendably modest in his post-match assessment, directing the spotlight away from his stellar performance and focusing it on his managers impact instead. “The better Dutchman won today,” he began. “One brilliant coach beat 11 excellent players. When you play under such a great manager, you play a totally different game.”

Hiddink had masterminded yet another miracle but, unlike Victor Frankenstein, revelled in his creation. Much to the chagrin of Dutch fans, he didn’t hold back in his celebrations at the final whistle.

In the same way that Russia gleamed a modicum of revenge for their loss in ‘88, in defeat the Dutch could claim a victory – however microscopic. The Oranje philosophy of total football had triumphed. That which they had created had ultimately led to their destruction.

Although Russia lost their semi-final 3-0 to Luis Aragonés unstoppable Spanish side nothing could detract from their progress. At home nationalism was at an all-time high. After the quarter-final hundreds of thousands of people poured out into the streets across Russia to a cacophony of honking and yelling. The political significance of the performance was unquantifiable.

Arshavin’s outstanding display made him a national icon and Europe’s hottest property. The enigmatic character owed so much to Advocaat and Hiddink, men who stratospherically altered the trajectory of his career and unwittingly put one over their compatriots in the process.