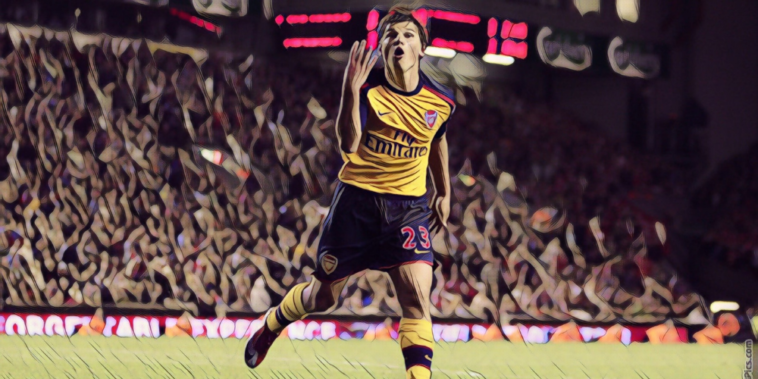 Andrey Arshavin perhaps never reached the heights many had expected upon his arrival into the Premier League, a player who had been the shining light of Russian football frustratingly failing to find consistency at Arsenal.

Arshavin’s time in north London was a microcosm of his career as a whole, moments of sheer genius mixed with underwhelming performances, his unpredictability contriving to both bamboozle defenders and exasperate supporters.

Brilliantly gifted, his flame may have flickered too briefly but he undoubtedly left some lasting moments on the minds of Arsenal supporters, none more so than a sensational showing at Anfield, an evening when it all came together for the best Russian player of his generation.

Arshavin’s story began in the northern Russian city of Leningrad, now known as Saint-Petersburg, where his footballing journey began with a debut for Zenit St. Petersburg shortly after the turn of the millennium.

Zenit were pre-takeover and far from the domestic giant they have since become, but a collection of home-grown stars began to break through and formed the core of a side that would end Moscow’s dominance of the Russian Premier League in 2007.

Arshavin was the jewel in the side that won the title for the first time in the post-Soviet era, whilst he shot to prominence during the club’s brilliant run to UEFA Cup success that same season, the architect of Rangers’ downfall in the final in Manchester.

Already acknowledged as his nation’s leading light, he exploded further at that summer’s European Championship as one of the players of the tournament, despite missing the first two games through suspension.

Upon returning to the side he scored in Russia’s must-win clash against Sweden to seal progress to the knockout stages, before an electric display secured one of his country’s best major tournament results as the Netherlands were beaten in extra-time in the last eight.

Arshavin scored one and made another in a performance which made Europe’s elite sit up and take notice, tormenting a Dutch defence that had already sealed impressive wins against both Italy and France.

Barcelona were amongst those interested in rising away Zenit’s talismanic winger following Euro 2008, but it was Arsenal who won the race six months later following the conclusion of the Russian Premier League season, Arshavin becoming the most expensive player in the club’s history.

Excitement was understandably feverish at the arrival of a player who had lit up Europe’s biggest stage just months earlier and Arshavin’s opening months in the capital delivered some memorable moments.

His first goal arrived in style as he jinked beyond a challenge on the byline before lashing home a high finish at Blackburn, part of a fine attacking performance that saw the Russian record signing involved in three goals in a 4-0 win at the Emirates.

He netted once more as Lancashire opponents were swatted aside again at Wigan, before a performance that remains etched into Premier League folklore as Arsenal travelled to face title-chasing Liverpool.

Liverpool headed into the clash in need of three points to keep themselves in contention for the Premier League title, though their hopes were undone in spectacular fashion following a virtuoso display of finishing from the diminutive Russian.

Under the Anfield lights, Arshavin shone.

He opened the scoring after turning home Cesc Fabregas’ cross with his side-footed effort crashing in off the underside of the crossbar, handing the visiting Gunners a one-goal advantage at the interval before a second half of cutting-edge finishing and captivating chaos.

Headed goals from Fernando Torres and Yossi Benayoun put Liverpool in the ascendancy within the space of seven second-half minutes, though each time the Reds sought to gain control it was wrestled back by the brilliance of Arshavin.

His second of the night came after robbing Alvaro Arbeloa of possession in the left channel, taking the ball infield before lashing a thunderous finish beyond Pepe Reina.

The despairing dive of the Spaniard ultimately proved futile, as Arshavin’s fierce drive bent away from his clutches as it whistled into the far corner, a solitary finger placed on the Russian’s lips as he celebrated in front of the boisterous travelling contingent.

In a game that saw the pendulum swing fascinatingly back and forth, Arshavin sealed his hat-trick after capitalising on Fabio Aurelio’s wayward clearance to fire beneath Reina.

He may have wheeled away in surprise, but this was the performance of a ruthless executioner who ensured Liverpool’s title dreams were all but dead and buried.

Liverpool roared back again and levelled through Torres’ second of the evening, though this was a night which belonged to one man as Arshavin put the finishing touch to his pièce de résistance.

As the home side poured forward in search of a much-needed winner, the visiting Londoners hit them with a sucker-punch on the counter as the fresh legs of substitute Theo Walcott raced away on the break.

Somehow, in the dying seconds of the game, keeping momentum with him was a whirlwind of Russian motion, Arshavin powering forward to join his teammate before collecting his pass and lashing home a powerful finish beyond Reina once more.

The stunned faces on the Kop were matched only by the surprised look on Arshavin’s own face, bewildered by his own brilliance on a night his scintillating talent shone through.

Benayoun’s equaliser ensured parity in a captivating contest at the full-time whistle, but Liverpool’s five-game winning run was over as Arshavin’s quartet of finishes left their title dreams up in smoke.

It was a performance few can forget and one that means Arshavin will always be amongst the biggest ‘what if’ players in Arsenal’s modern history.

What if he had adapted properly to the demands of English football?

What if he had better applied himself in a bid to truly fulfil his potential?

What if he could have found consistency over a period of months, or even an entire season?

There were undoubtedly other moments, including a stunner at Old Trafford and a winning goal against former suitors Barcelona in the Champions League, but his impact waned in the following seasons and Arshavin’s was a flame that ultimately burned only too briefly.

He was perhaps symbolic of an Arsenal side who too flattered to deceive, a team which sparkled when everything clicked into gear but whose soft underbelly ensured they fell short of genuine and sustained competitiveness at the highest level.

Football holds a special affinity for mavericks, however, and the enigmatic Arshavin and the electricity of that night in Liverpool remain firmly etched into the Premier League’s annuals.