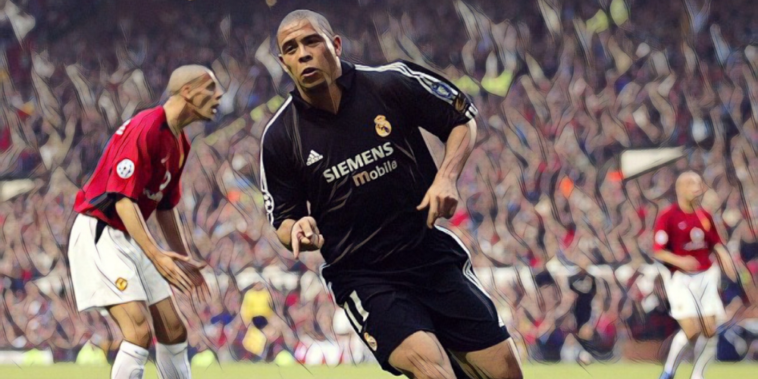 Benzema scored three times inside the final half an hour as Real Madrid completed a stirring comeback, a clash with proved a perfect advert for club football’s greatest competition.

The UEFA Champions League remains the pinnacle of club football and the ultimate for the world’s finest footballers, the ability to decide games at the highest level the difference between the good and the great.

Following Benzema’s brilliance we’ve looked at some iconic individual moments, revisiting the most memorable hat-tricks ever scored on the Champions League stage.

Here are five of the greatest hat-tricks in Champions League history.

Ronaldo Nazario’s individual brilliance saw him score one of the Champions League’s great hat-tricks in 2002/03, a performance which earned him a standing ovation from the Manchester United supporters whose dreams he had just ended in spectacular style.

Real Madrid’s Galacticos travelled to Old Trafford for the second leg of their quarter-final tie with a 3-1 advantage, though needed the brilliance of the Brazilian to ensure their passage into the last four.

Sir Alex Ferguson’s side may have triumphed 4-3 on the night, but it was an evening which belonged to one man as Ronaldo scored each of the visitor’s three goals in scintillating style.

United simply couldn’t live with Ronaldo’s blend of speed, skill and sharp finishing ability, the forward racing in behind the defence before firing home from just inside the penalty area for his first.

He netted twice more early in the second half to put the Spanish side in control, tapping home from close range following a free-flowing team move, before lashing home a spectacular strike from distance to seal his hat-trick.

United exited the competition 6-5 on aggregate, though their fans could only stand to admire one of the game’s greats producing a performance to savour.

All eyes were on Wayne Rooney ahead of his Manchester United debut, the teenager having arrived in a big-money deal from Everton after starring for England at the 2004 European Championship.

Rooney was handed his first start as the Red Devils welcomed Fenerbahce to Old Trafford, an evening few inside the famous ground will ever forget as a precocious talent inspired an emphatic 6-2 victory.

Rooney was irrepressible and announced himself to the Champions League stage with a hat-trick, becoming just the fourth player to score three times on their competition bow and the second-youngest hat-trick scorer after Raul.

This was the 18-year-old’s first performance since breaking his metatarsal at Euro 2004, a tournament which saw him explode as arguably the world’s most exciting young talent.

It was clear from the start that Wayne Rooney was set for greatness at Old Trafford! ✨

📆 On the 28th September 2004, at 18 years of age, he scored a fantastic debut hat-trick against Fenerbahce in the Champions League 🔴⚫️

The version of Rooney which tormented defences in Portugal was on show quickly in a United shirt, dispatching his first in fine fashion after being played in by Ruud van Nistelrooy.

His second was taken in similar confident style as he manoeuvred a shooting opportunity to fire in a low finish from just outside the box, before stepping up to bend home a wonderful curling free-kick.

It was a goal that sent the home crowd into raptures and announced Rooney as a genuine star.

Amongst the finest individual performances in Champions League history, Robert Lewandowski’s destruction of Real Madrid in the 2012/13 semi-finals proved a devastating display of finishing.

Lewandowski had scored 30 goals in all competitions the previous season as Borussia Dortmund were crowned champions of Germany, though it was the following campaign that saw the forward establish himself as one of Europe’s elite.

The Poland international scored 10 goals in 13 appearances in the Champions League, including all four goals in a 4-1 thrashing of the record winners in the last four.

It was a masterclass in finishing from Lewandowski as he netted a first from close range on the stretch, before restoring Dortmund’s lead following Cristiano Ronaldo’s equaliser for the Spaniards.

Remember when Lewandowski did this to Real Madrid? 🤤pic.twitter.com/P7WbOfla9F

His hat-trick goal was the one that lives longest in the memory, the confidence oozing through the striker’s veins as he produced a smart drag-back inside the penalty area before lashing the ball high into the net.

Lewandowski made it four from the penalty spot to leave Real Madrid with an almost impossible task ahead of the return fixture, becoming the first player in Champions League history to score four times in a semi-final.

Cometh the hour, cometh Cristiano – a man who has so often delivered when it matters most on the Champions League stage.

The all-time record goalscorer in Champions League history has no shortage of defining moments in continental competition, though this hat-trick against Atletico Madrid stands amongst his finest performances.

Juventus headed into the second leg of their last-16 clash trailing 2-0 in the tie, a formidable prospect against Diego Simeone’s side given their notorious reputation as one of Europe’s stingiest defences.

Atletico had not conceded a goal in five fixtures ahead of their trip to Turin and as anticipated lined up in militant defensive shape, only for the supernatural talents of Ronaldo to turn the tie on its head.

⏪ Throwback to when Juventus needed three goals against Atletico Madrid…

Ronaldo rose highest to head home at the back post and give Juventus hope before the break, before another fine header was adjudged to have crossed the line by goal-line technology to bring the scores level.

Ronaldo completed the comeback from the penalty spot four minutes from time, a special night for a special player who has shown his priceless match-winning ability on countless Champions League occasions.

The 2018/19 edition of the Champions League proved to be one of the most enthralling tournaments in recent memory, a campaign full of shocks, surprises and incredible comebacks.

Spurs faced surprise package Ajax in the last four after the Dutch side had enjoyed a remarkable run to the semi-finals, eliminating holders Real Madrid and Juventus in emphatic fashion during the knockout stages.

Ajax’s run looked set to continue with a first final appearance since the mid-nineties after a first leg win in London, before scoring twice early in the return to take a commanding 3-0 aggregate lead.

Mauricio Pochettino’s side needed three goals in just 45 minutes at the Johan Cruyff Arena to progress to a first ever final, their hopes raised as Lucas Moura netted two quick-fire goals within the first 15 minutes of the second half.

Moura’s double created huge tension among the home side as Spurs edged towards an improbable comeback, one which was completed in the most dramatic of circumstances as the Brazilian’s 96th-minute winner sent the north London side through on away goals.