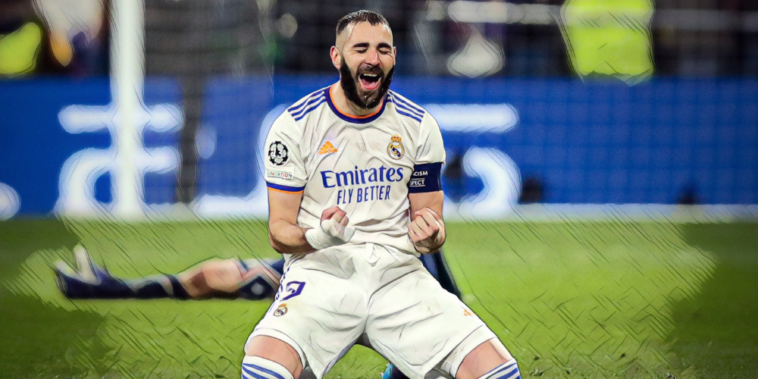 The line-up for the quarter-finals of the Champions League is beginning to take shape, with Liverpool and Manchester City securing their place in the competition’s last eight this week.

First leg wins provided the platform for the Premier League sides to progress, where the duo will be joined by Bayern Munich and Real Madrid after memorable last-16 wins.

Bayern Munich thrashed Red Bull Salzburg 7-1 to send an ominous warning to the rest of the competition over their credentials, whilst Real Madrid secured a stunning comeback win against Paris Saint-Germain at the Bernabeu.

Following the midweek action we’ve compiled the leading performers into our all-star side, here is the Football Faithful’s Champions League Team of the Week.

Sporting Lisbon arrived at the Etihad with pride to play for after their 5-0 thrashing against Manchester City last time out, even the greatest optimist not expecting a genuine turn around of the tie.

Having been exposed in ruthless fashion during the first leg, Sporting battled to a goalless draw with the Premier League champions as Antonio Adan helped himself to a clean sheet.

The 34-year-old made four saves – including smart stops from Phil Foden and Raheem Sterling – as Sporting exited the competition in respectable fashion.

Liverpool’s best player despite defeat to Inter Milan at Anfield, the Reds’ right-back is enjoying some season for Jurgen Klopp’s side.

Alexander-Arnold’s creativity was again evident as he carved out a game-leading five chances, whilst the 23-year-old racked up 11 crosses, 15 passes into the opposition box and two shots on goal.

The England international also regained possession on nine occasions, but it is his unrivalled forward threat from right-back that makes Alexander-Arnold irreplaceable to Liverpool.

Inter Milan battled to a 1-0 win over Liverpool to end the Reds’ 15-game unbeaten run in all competitions, with the Italian champions providing a tough test across the two legs.

Milan Skriniar was the stand-out from a defensive display that ended with a clean sheet on Merseyside, the Slovakia international making a huge nine clearances for the Nerazzurri.

A vital block from Virgil van Dijk kept his side alive in the tie, a performance which demonstrated why Skriniar has been regularly linked with a Premier League move in recent windows.

David Alaba has been an inspired signing for Real Madrid following his arrival on a free transfer last summer, the defender having helped fill the void left by the departures of Sergio Ramos and Raphael Varane at the Bernabeu.

Alaba is an elite talent and his partnership with Eder Militao has been the bedrock of Real Madrid’s success this season, the duo alert to the danger Paris Saint-Germain possessed as the Spanish side looked to contain the electric Kylian Mbappe.

A serial winner, his performance against PSG ensured Real Madrid’s chase for a 14th Champions League will continue into the quarter-finals.

Another impressive performance from Zinchenko who continues to add under-stated value to the Manchester City side, the left-back producing on the pitch despite the mental challenges he has faced in recent weeks.

Comfortable in the backline or further forward in midfield, his attacking instincts provided an outlet for Pep Guardiola’s side down the left, whilst he dealt defensively with Sporting’s threat.

It’s hard to believe that Luka Modric is 36-years-old after watching the midfield master produce an extraordinary performance in Real Madrid’s 3-1 win over Paris Saint-Germain.

Two goals down on aggregate, it was the Croatian schemer – alongside Karim Benzema – who dragged his side back into the contest.

36-year-old Luka Modric picked up the ball from his own box, dribbled past the entire PSG mid and sent a perfect through ball to Vinicius Jr.

Modric finished off the move by assisting Benzema's second.

We are all witnesses 🤯👏 pic.twitter.com/LThiNkk9tN

Full of running, vision and talent, his driving run and cute assist for Benzema’s second was superb and on a night where Real Madrid needed their stars to shine, Modric delivered.

Arturo Vidal crashed into challenges in a combative performance at Liverpool this week, the old war-horse of the Inter Milan midfield refusing to give up on the tie.

The Chile midfielder made four tackles, three clearances and two interceptions for the Nerazzurri, though the senseless red card of compatriot Alexis Sanchez prevented Vidal and company from truly testing Liverpool’s resolve.

His block from Luis Diaz was outstanding, a moment which symbolised the never-say-die attitude Vidal has carried throughout a long career among Europe’s elite.

Thomas Muller might not command the headlines of some of his Bayern Munich teammates, but there is no disputing his irreplaceable importance to the Bundesliga champions.

Muller, as ever, was brilliant in the Bavarians’ destruction of Red Bull Salzburg at the Allianz Arena, scoring two wonderful goals and craving out a game-leading three chances for his teammates.

The 32-year-old has finished as the leading assist provider in Europe’s top five leagues in each of the past two seasons and is currently top of the rankings in 2021/22, whilst his double to down Salzburg moved him above Thierry Henry and into seventh among the Champions League’s record scorers.

One of the most effective and under-appreciated players of his generation.

Having seen Achraf Hakimi come out on top in their first leg duel, Vinicius Junior responded with an electric performance to cause the Moroccan all kinds of problems at the Bernabeu.

The Brazilian is enjoying a breakthrough season and was at his evasive best this week as he completed seven dribbles against Paris Saint-Germain, whilst he was fouled on four occasions as the Ligue 1 side struggled to deal with his direct approach.

It’s now 16 goals and 10 assists in all competitions this season after the 21-year-old teed up Karim Benzema’s first goal of the evening, a fine return for a footballer fast emerging as one of Europe’s most exciting talents.

Karim Benzema’s legend at Real Madrid increases with each passing performance, his latest one that will live long in the memory after a heroic hat-trick completed a comeback win against PSG.

Real Madrid were down and out after Kylian Mbappe’s goal provided PSG with a two-goal cushion, before Benzema’s brilliance sparked a thrilling fightback.

The veteran forward robbed Gianluigi Donnarumma of possession in the build-up to his first, before a quick-fire double turned the game on its head and had Benzema celebrating the most remarkable of hat-tricks.

It’s now 309 goals in the colours of Real Madrid for the Frenchman, who moved past Alfredo Di Stefano in the all-time charts after an unforgettable showing at the Bernabeu.

Robert Lewandowski breaks records on an almost weekly basis and the Bayern Munich forward was at it again in the Champions League this week.

Lewandowski scored three goals inside the opening 23 minutes of Bayern’s 7-1 win over Salzburg, the earliest ever Champions League hat-trick and the third-fastest treble in the competition’s history.

Robert Lewandowski has scored 40+ goals for the SEVENTH season in a row 🤯 pic.twitter.com/yiGqb7vvgf

It’s now a tournament-leading 12 goals in this season’s Champions League and a remarkable 42 goals in 35 games for the German giants in 2021/22.

Both he, and Bayern, will take some stopping.