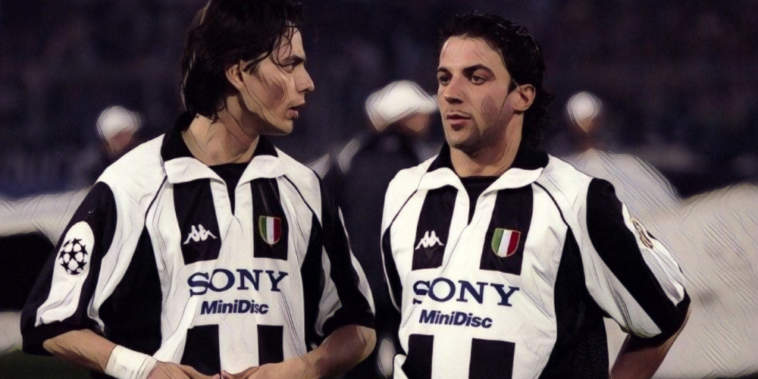 Football’s finest partnerships are often a recipe of several ingredients. The first, and most crucial, is that the two talents compliment each other’s game perfectly.

The perfect partnership can be a combination of two elite talents, whose outrageous individual ability mean the duo often operate on the same frequency. Alternatively, it can be two footballers of perhaps lesser quality, but whose unique gifts combine to create a pairing greater than the sum of its individual parts.

Brilliant chemistry on the pitch is not always a reflection of relationships off it, however, with the partnership of Alessandro Del Piero and Filippo Inzaghi one such infamous case.

It was seemingly the perfect pairing for Juventus during the nineties, but one that ultimately proved a short, sweet and then increasingly sour alliance.

Del Piero was the star in the Juventus side upon Inzaghi’s arrival from Atalanta, the former having succeeded Roberto Baggio as the Bianconeri’s creative force.

Del Piero had helped Juventus to Champions League success in 1996, before reaching a second successive final the following season and scoring 15 goals as the club claimed the Scudetto.

The departures of Gianluca Vialli and Fabrizio Ravanelli to England saw Juventus look for the ideal foil for their talismanic ten, securing the signing of Inzaghi.

Inzaghi had exploded at Atalanta after a nomadic early career, scoring 24 league goals to win the Capocannoniere award as the division’s leading scorer. His haul was more than each of his teammates combined and earned him both the Young Player of the Year accolade and a high-profile move to Turin.

Juventus were already the leading side in a division packed full of world-class talent, but had now added one of Serie A’s best home-grown forwards to their attacking options.

In essence the duo were complete opposites, Del Piero one of the most gifted footballers on the planet, as comfortable carving out opportunities as he was converting them.

The fantasista’s first touch absorbed possession and he had the technique to manipulate the ball however he chose, developing a trademark for bending arced finishes into the far corner from the left-hand side of the penalty box.

Inzaghi’s game was less refined, but almost as effective. He was neither overly tall or quick, whilst his latter career often saw him sit out of training ground rondo drills, well aware he would spend the session chasing the ball as more technically gifted teammates retained possession.

He was, however, instinctive and alert. Operating on the shoulder of the last defender, he awaited the opportunity to blindside centre-backs with darting runs in behind. If the ball fell loose in the area, there was a strong chance Inzaghi was within its reach.

Inzaghi began brilliantly in his new colours, netting a double in the Supercoppa win over Vicenza before scoring three times in his first four league appearances, including a stoppage-time equaliser at Sampdoria.

The two formed an instant understanding on the pitch, with Del Piero’s vision often finding the ghosting runs of his compatriot and the roles occasionally reversing. With Zinedine Zidane pulling the strings behind the front pair, it was a triumvirate the envy of European football.

Despite Del Piero being more inventive than the predatory Inzaghi, it was the former who led the side for goals as he finished the Serie A season with 21 for the campaign.

That return saw him finish equal-fourth in the race for the Capocannoniere award, in a roll call of elite goalscoring talents. Oliver Bierhoff led the standings, trailed by Ronaldo, Roberto Baggio, Del Piero and Gabriel Batisuta – the finest of company to keep.

Inzaghi was seventh after scoring 18 league goals for the season, with Juventus retaining the title after losing just two games. Finishing five points ahead of Inter Milan, the goals of Del Piero and Inzaghi had led their charge with the duo having found themselves on the same scoresheet in seven separate victories.

The highlight was a 4-1 destruction of AC Milan at the Stadio delle Alpi, each scoring twice as the Rossoneri were thrashed in Turin. Their braces were almost representative of their respective games. Del Piero’s double included a brilliant free-kick, whilst Inzaghi raced away to round the goalkeeper as part of a second-half salvo.

Juventus’ formidable forward line was also firing the club’s charge in Europe. Having seen their defence of the Champions League ended by Borussia Dortmund in the 1997 final, the Bianconeri were in pursuit of a third successive showpiece.

Three home wins provided the platform for progression from the group stage, Inzaghi’s winner against Manchester United securing a runners-up finish behind the Red Devils.

Juventus were again dependent on Inzaghi in the first knockout round as another equaliser salvaged a home draw with Dynamo Kyiv. The Ukrainian side had stunned Europe to win 4-0 at Barcelona in the group stages, but were no match in the return as an Inzaghi hat-trick sealed a 4-1 win for Juventus in Kyiv.

Del Piero had netted the fourth in Ukraine and came alive in the semi-finals, scoring a hat-trick of his own in the first leg as Monaco were beaten. His first of the evening remains one of Juventus’ most iconic Champions League goals, a picture book free-kick that left the scrambling Fabien Barthez with no chance.

📅 #OnThisDay in 1998…
🔥 Juventus legend Alessandro Del Piero scored a hat-trick in the semi-finals, including THIS free-kick 😍#UCL | @juventusfc pic.twitter.com/wvpRVAfQtz

Real Madrid ensured it would be successive final defeats for Juventus after victory in Amsterdam, but it had been a stunning season from the club’s twin threats in attack.

Del Piero and Inzagi had combined for 59 goals in all competitions and were a devastating double-act, supported by Zidane’s majestic brilliance and a domineering midfield including Edgar Davids, Antonio Conte and Didier Deschamps.

It was, however, the beginning of the end for both their partnership and relationship. Del Piero suffered a serious knee injury that saw him miss the majority of the next campaign and upon his return there were tensions between the once synchronised stars.

Del Piero struggled to capture his form as his body adjusted to a lengthy absence and the perceived selfish streak from Inzaghi increased unrest between the pair.

The rift reached a nadir during a clash with Venezia. Del Piero had opened the scoring from the spot, but had endured a barren run without a goal from open play. His frustrations only increased with the tunnel-visioned approach of his teammate, who ignored the better positioned Del Piero on several occasions during the contest.

That Inzaghi finished the game with a hat-trick was besides the point, Del Piero was incensed and let the public know his feelings during a post-match interview.

A combination that had once flourished was becoming increasingly toxic.

Inzaghi remained with Juventus until 2001, before being sold to rivals AC Milan for £25m. The arrival of David Trezeguet had provided competition and a new partner for Del Piero, a working relationship that flowed much more freely than with Inzaghi.

The two also rarely featured together at international level, as both jostled for position in the Azzurri’s plans. Both were included in the squad that won the 2006 World Cup, but Inzaghi made just one substitute appearances. Given the presence of Francesco Totti, Lucas Toni, Alberto Gilardino and Del Piero, it was an embarrassment of riches for the eventual world champions.

The former teammates became rivals at club level as Milan and Juventus competed for major honours, including meeting in the 2003 Champions League final as Inzaghi finally got his hands on club football’s biggest prize.

He added a second four years later, scoring twice in the final win over Liverpool in Athens, and ended his career with 70 goals in UEFA competition – an impressive haul for Italy’s greatest tap-in merchant.

Del Piero remained with Juventus to become arguably the club’s greatest ever player, making more appearances and scoring more goals than any other player. Even given the iconic names that have adorned the black and white stripes, his is the one held in the highest esteem.

He remained even after relegation following Calciopoli scandal, firing the club’s return to Serie A and eventually departing after six Scudetto successes.

His final game saw him withdrawn to a heroic ovation after a goal against Atalanta, securing a win that completed an entire league season without defeat for Juventus.

On the same day, perhaps fittingly, Inzaghi was saying his own farewell in Milan. The veteran came off the bench to score the winner against Novara, the final goal of a career that had seen so many.

Each departed Serie A as greats of the game, two of the league’s modern icons and with countless goals, moments and honours behind them.

Both were fantastic talents individually and for a brief time created an unforgettable union, one that sadly failed to last the test of time.