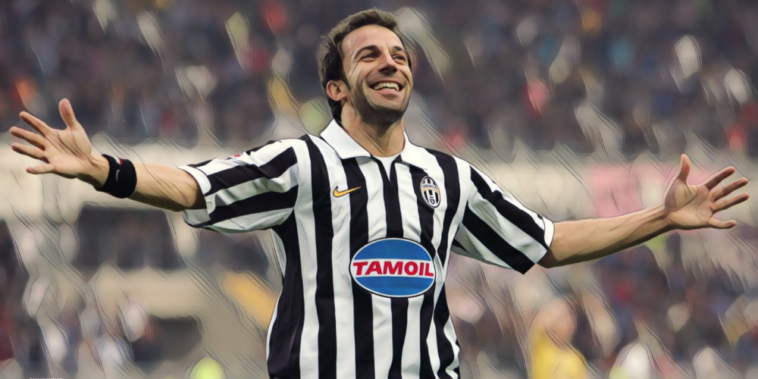 The nineties was an unforgettable period in the landscape of Italian football, the nation becoming the stage on which the game’s greatest footballers demonstrated their talents.

There has never been such a dense collection of global superstars in one division and it will likely never be repeated, with Serie A sides responsible for six of the nine world transfer record fees paid across the decade.

Whilst the imports from foreign shores piqued the interest of those fascinated by Italy’s top tier, alongside the marquee arrivals was a collection of home-grown heroes with some of the finest Azzurri footballers of modern times emerging during the era.

Del Piero’s rise to iconic status began during the nineties, where having decided his talents were more suited to offence as opposed to defence, transitioned as a young player from goalkeeper to forward.

It’s remarkable to think given the ingenuity in which he possessed at his feet that a fledgling Del Piero once considered donning the gloves.

Born in northern Italy in the small town of Conegliano, it did not take long before the positional switch attracted interest from clubs, with second-tier Padova securing the teenager’s services.

The move away from home matured Del Piero and he was soon handed his senior bow, whilst it took just 14 appearances and one goal before a scramble ensued for his signature.

Italy’s northern giants all made enquiries for the lower-league gem, but it was Juventus who won the race for Del Piero in 1993 in a move that began an unforgettable love-affair.

Despite making the step to one of Serie A’s biggest clubs, Del Piero’s impact was instant.

He scored as a substitute on his second appearance, before netting a hat-trick on his first start for the Bianconeri against Parma.

His talent was unquestionable, with arguably his greatest goal coming soon after that initial emergence, latching onto a 50-yard pass to lash home a first-time outside-of-the-boot volley against Fiorentina and announce his arrival on the biggest stage.

Providing the promise of youth behind an attacking contingent featuring the likes of Gianluca Vialli, Fabrizio Ravanelli and Roberto Baggio, his breakthrough came during the 1994/95 season as he filled in for the injury-enforced absence of the latter.

Del Piero became Baggio’s replacement both in the immediate and as Italy’s next great trequartista, bringing an artistry in possession that was in contrast to the staunch defensive resilience Italian football has become renowned for.

Del Piero operated in half-spaces and blurred the line between creator and converter, often producing his finest work in the inside-left channel, an area that became known as the ‘Del Piero Zone’ for the regularity in which he cut inside to bend balls beyond the goalkeeper’s grasp.

He scored 11 goals in all competitions during that breakthrough season as Juventus won a domestic double, ending a nine-year wait for the Scudetti in the process.

Such was the faith that Marcello Lippi had in his emerging forward, a decision was made to move Baggio – the defining Italian player of his era – on at the end of the season, with Del Piero inheriting Il Divin Codino’s number ten shirt.

Alongside Vialli and Ravanelli he flourished as the forward trident fired Juventus to Champions League success the following season, scoring six goals as the Italian side secured a second European Cup triumph.

It was the zenith of a sustained period of success for Juventus, who won three league titles in four seasons and reached the Champions League final in three consecutive campaigns, though defeats to Borussia Dortmund and Real Madrid ended hopes of adding to the club’s 1996 coronation as Europe’s finest.

Becoming increasingly influential, Del Piero enjoyed his best season during the 1997/98 campaign to be named as Serie A’s Footballer of the Year, scoring 21 goals in the league alone and leading the division for assists.

He was similarly sensational in Europe after scoring 10 goals in Juventus’ run to the Champions League final, scoring a hat-trick  – including a wondrous free kick past Fabien Barthez – in the semi-final first leg thrashing of Monaco.

He rapidly became the man for the big occasion in Europe, scoring 20 goals in just 26 Champions League appearances – remaining the fastest ever player to reach the landmark at the time of his retirement.

Del Piero’s genius meant he struck up brilliant partnerships with a number of forwards, his invention and incision proving the perfect foil for more single-minded penalty-box poachers.

Having dovetailed delightfully with Vialli and Ravanelli he shone alongside Filippo Inzaghi, but their union soon deteriorated after a prolific first season in tandem amid tensions on and off the pitch.

Del Piero missed the majority of the 1998/99 campaign after sustaining a serious knee injury and it is telling that Juventus’ season crumbled in his absence, even the presence of Inzaghi and Zinedine Zidane not enough to compensate for the talisman’s time on the treatment table.

It was a moment that changed the course of Del Piero’s career, an injury which saw the star lose explosiveness with the forward returning a different physical specimen as he sought to add bulk in a bid for greater robustness.

That period saw Del Piero fail to make his mark at international level, struggling at the 1998 World Cup before finding himself out of favour during the opening stages of Euro 2000, returning to the side only to waste two guilt-edged chances in the Azzurri’s final defeat to France.

It was a period of indifference as Del Piero adjusted his game to his body’s capabilities, attracting criticism after a 70-week run without scoring from open play – even if his genius from set-pieces punctuated his goal-drought without dead balls.

Though his speed had diminished, his quickness of thought and magical touch remained and the 2001/02 season saw Del Piero return to his finest form.

The new partnership of Del Piero and David Trezeguet saw Juventus win a three-horse race to be crowned as champions once more, the latter finishing as the league’s leading scorer as the former pulled the strings in behind.

Juventus reached the Champions League final the following season, with Del Piero instrumental in the semi-final success against Real Madrid, creating one and scoring another after turning Fernando Hierro inside out at the the Stadio Delle Alpi.

Juventus ultimately fell to defeat to AC Milan on penalties following a goalless draw, however, as Del Piero lost his third European showpiece.

Rarely has a forward been so adept from free-kick situations, the conceding of a foul anywhere outside the penalty area’s edge greeted with trepidation as Turin’s favourite footballer set his sights.

⚪️⚫️ Juventus legend Alessandro Del Piero back in the day 🔝

No Italian footballer has ever scored more free-kicks across all competitions, whilst he ranks third in Serie A history behind only Siniša Mihajlović and Andrea Pirlo.

Del Piero was capable of some of the most aesthetic goals imaginable, his mixture of close control and a shooting ability that sent the ball on unfathomable trajectories ensuring a highlight reel few modern greats can equal.

Amongst his most memorable goals came as international success was finally found with Italy, a late clinching goal into the roof of the net as the Azzurri left it late to defeat Germany in the 2006 World Cup semi-finals.

He was introduced from the bench as France were beaten on penalties in the final, converting from the spot to become a World Cup winner and earn redemption with the national side in Berlin.

Del Piero’s legend at Juventus is only enhanced following his decision to remain with the club despite relegation to the second tier, their demotion as a result of the Calciopoli match-fixing scandal a stain on both the club and Italian game.

Del Piero – alongside the likes of Pavel Nedved, Gianluigi Buffon and Trezeguet – remained fiercely loyal to the Old Lady, with the former proving a man possessed in returning the side to former glories.

He scored 20 league goals as Juventus won promotion at the first attempt, before finishing as Serie A’s leading goalscorer during the side’s first season back amongst the top flight.

It was a remarkable campaign from the veteran as he won the Capocannoniere award and was named as Serie A’s Footballer of the Year for a second time, a decade after first claiming the honour on his ascent to becoming one of the world’s best.

That season also saw Del Piero become Juventus’ all-time record goalscorer, a record he extended to a staggering 290 goals before calling time on his career with the club.

Ventures followed in Australia and India as a wonderful career came to a close, but Del Piero was a one-club man in all but actuality, arguably the player who first comes to mind when recalling Juventus’ iconic the black and white stripes.

Del Piero ranks as arguably the greatest Juventus footballer in the club’s storied history, a statement far from hyperbole even given the illustrious names amongst the Bianconeri’s annuals.

Amongst the finest talents of his generation, Del Piero was a forward whose sublime best left Turin crowds transfixed.