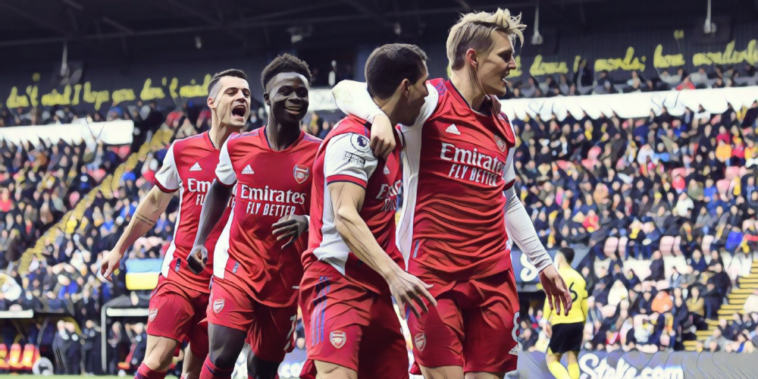 There was misery for Manchester United following a dismal derby defeat at the Etihad, whilst Arsenal capitalised to move into the top four after beating Watford.

Brentford secured the points in a crucial contest down at the bottom against Norwich, whilst there were impressive wins for Aston Villa, Chelsea and Newcastle, the latter continuing their upward momentum with a fifth win in six fixtures.

Here are our heroes and villains from the latest Premier League action.

‘The best midfielder in the world’ was Paul Scholes’ assessment of Kevin De Bruyne, after watching the Belgium international dismantle his former side in the Manchester derby.

‘I can’t think of anyone who touches him’ the former Manchester United midfielder continued when discussing De Bruyne’s devastating derby performance to Premier League productions and the Red Devils midfield certainly didn’t come close to shutting down an exquisite footballer operating at his best.

What an amazing day. Derby win and 50 th goal in the premier league. Blue city 💙 pic.twitter.com/8lgIc0VfZL

De Bruyne scored twice and created another at the Etihad, putting Pep Guardiola’s side in control during the first half before leading a dominant display in the second.

His cross for Riyad Mahrez to score the third was perfection, just one moment in an all-action performance that saw De Bruyne put his signature stamp on the derby.

On this form, in which he orchestrates even the biggest occasions, there are few better footballers in the game.

Brighton’s season is beginning to unravel, with Graham Potter’s side beaten for the fourth consecutive Premier League fixture at Newcastle this weekend.

The Seagulls had lost just four of their previous 24 fixtures this season, but a concerning run of results has seen Brighton begin to slide down the division.

The club’s defensive performances have not been good enough and Brighton found themselves two goals down inside 14 minutes at St James’ Park, first being caught on the counter before conceding a set-piece goal as Fabian Schar headed home.

It’s now nine goals conceded in their past four games and it is hard not to consider how the sale of Dan Burn has impacted their performances, the towering centre-back on the victorious Newcastle side against his former team this weekend.

Few were overly concerned following his departure, but Burn has played a prominent role in Newcastle’s renaissance as the Seagulls have struggled in his absence.

Steven Gerrard knew better than most Philippe Coutinho’s capabilities when signing the midfielder on loan from Barcelona, gambling on a talent whose career had stalled in Spain.

It’s proven an inspired move with the Brazilian having flourished back in the Premier League, his performance in the 4-0 win over Southampton this weekend his best so far in a Villa shirt.

Coutinho can be captivating viewing when in the mood, leaving defenders twisted and turned with sharp feints and cute passes between the lines.

The decision to move him centrally behind Ollie Watkins and Danny Ings proved a success as the January signing starred against the Saints, scoring one and creating another in a fine performance from Gerrard’s side.

He could quite easily have helped himself to a hat-trick before departing to a standing ovation, his return to form a welcome addition to the Premier League.

Norwich needed a result this weekend as Brentford arrived at Carrow Road, the visitors without a win in eight league games and a side Dean Smith’s side looked capable of catching.

The Canaries instead capitulated to lose 3-1 at home soil, Ivan Toney helping himself to a hat-trick that included two cooly converted penalties.

Ben Gibson was the guilty party responsible for conceding both spot-kicks, first challenging with a needless high foot inside the area, before bringing down Toney with a ludicrous lunge.

It was a torrid afternoon for the centre-back and one which might just have condemned the Canaries to the Championship next season.

Liverpool maintained their challenge for the title with a hard-fought 1-0 win over West Ham, the Reds riding their luck on occasion to secure three points at Anfield.

Jurgen Klopp’s side were below their best in the win, but the game offered another glimpse of the exciting potential of Luis Diaz.

The Colombia international has made an instant impact since his arrival from Porto in the winter and was the stand-out star from the win over the Hammers, his mix of insatiable work-rate and trickery a nightmare for defenders and a delight for his teammates.

Diaz had the crowd on their feet with one brilliant 50-yard run into the Hammers’ half and the early signs are his direct football and exciting close control will prove a perfect fit in Liverpool’s front three.

Harry Maguire has endured a challenging campaign with criticism of the Manchester United captain prevalent during the 2021/22 season.

The centre-back produced another poor performance in the Manchester derby this weekend, as the Red Devils were taught a footballing lesson at the home of their cross-town rivals.

Since signing for Man United, Harry Maguire has received more yellow cards than any other Premier League centre-back 😳 pic.twitter.com/vpHSRS6IlX

Maguire saw Kevin De Bruyne’s opener go through his legs, before inexplicably dummying David de Gea’s save to allow the ball back into the danger zone for City’s second.

The England international was booked for a reckless lunge on De Bruyne in the second half, and saw Riyad Mahrez’s volley deflect off him for the host’s third in a derby defeat he will want to forget.

Arsenal fans are daring to dream of Champions League football returning to the Emirates, a fourth consecutive Premier League win moving the Gunners into the division’s top four.

The north Londoners have found form at a time when each of their rivals have stumbled, with defeats for Manchester United, West Ham and Wolves this weekend having placed Arsenal in a strong position to end their exile from Europe’s elite.

Arsenal are fourth, ahead of both United and West Ham despite having played three games less. Tottenham – who face Everton on Monday evening – are six points behind on the same games played.

Arsenal’s improvement has come after Mikel Arteta ripped up the core and replaced it with emerging talents, getting rid of underperforming big-name assets and bringing in players with a point to prove and potential to grow.

Bukayo Saka was the star of the win at Watford and continues to excel, his 13 goal involvements in the Premier League this season a leading total among players aged 21 or under.

Martin Odegaard (22) and Gabriel Martinelli (20) were also on the scoresheet with the latter’s goal making Arsenal just the fourth team to have three different players aged 21 or younger score 5+ goals in a Premier League season (Saka, Martinelli and Emile Smith Rowe), after Manchester United (1995/96), Leeds (1998/99) and Chelsea (2019/20).

It bodes well for the club’s long-term future and Champions League qualification could accelerate their development.

Max Kilman has enjoyed a fine season for Wolves, with calls for the centre-back to earn an England inclusion following his improvement at Molineux during the current campaign.

The 24-year-old picked the worst time to produce one of his worst showings of the season this weekend, as the watching Gareth Southgate saw Kilman struggle in the club’s 2-0 defeat to Crystal Palace.

He was part of the defensive mix-up that led to Palace’s opening goal, before conceding a penalty with a rash challenge on Jeffrey Schlupp inside the area.

It was a disappointing day for Kilman, who failed to contain the impressive Wilfried Zaha and Jean-Philippe Mateta.