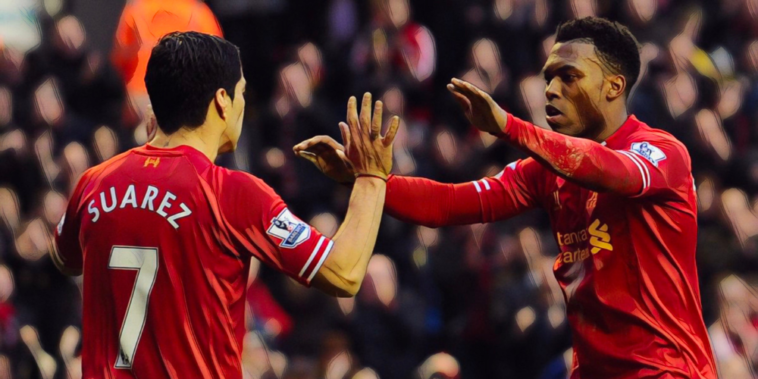 Liverpool’s failed charge towards the Premier League title in 2013/14 remains one of the most captivating near-misses in the division’s history.

A side few thought could arrive in title contention suddenly snowballed through the season, gaining momentum and confidence at a rate that had all but the blue half of Manchester trailing.

Brendan Rodgers’ side were fun but flawed, neutral’s favourites who were thrillingly gung-ho moving forward but possessed a rearguard too routinely exposed as the Premier League campaign progressed.

The success of the side was built around a the club’s ‘SAS’ partnership, a tantalising twin threat of Luis Suarez and Daniel Sturridge.

Rodgers had once described the duo as ‘soloists’, suggesting that the individualism of the forwards made them difficult to view as a pair. It’s true that each possessed a capability for unpredictable artistry and an occasional single-mindedness when it came to goalscoring, but to dismiss them as a partnership fails to do justice to two solo acts who came together to sing one of the Premier League’s great duets.

Suarez and Sturridge had just one full season together, but it was one few at Anfield will forget.

Suarez had been first to move to Merseyside after arriving from Ajax in a £22.8m deal in January 2011. His remarkable record in the Netherlands, which included a 49-goal season in 2009/10, had piqued the interest of the Reds’ recruiters.

Initially signed as partner for Fernando Torres, the Spaniard’s subsequent departure in the same window saw the Uruguayan pushed into a front two with Andy Carroll.

Carroll had signed from Newcastle on the same dramatic deadline day of big-money buys in the Premier League, but the giant Geordie proved an awkward fit at Anfield. The appointment of Rodgers as manager in 2012 and a focus on more intricate football spelled the end of his time with the club.

In search of a new striker partner for the fast-improving Suarez, Rodgers returned to one of his former sides in Chelsea and secured a £12m deal for Sturridge in January 2013.

The 23-year-old has been regarded as a huge prospect after leaving Manchester City for Chelsea, but struggled for opportunities in West London and was often used out of position at Stamford Bridge.

A goal on debut was followed with two more in consecutive games, as the winter window arrival became the first Liverpool player since Ray Kennedy in 1974 to score in each of his first three games.

Ten goals in 14 league games was a fine return as Sturridge hit the ground running, whilst Suarez ended the campaign with 30 goals in all competitions as the their partnership showed promise.

The former was forced to begin the new season without his South American sidekick however, as a ban for biting Branislav Ivanovic in a clash with Chelsea ruled Suarez out of the season’s opening five fixtures.

In his absence Sturridge took centre stage, scoring a hat-trick of winning goals as Liverpool began the season with consecutive 1-0 wins.

Suarez’s return came at Sunderland in late September and it was the launchpad to a superb season, as the Black Cats were beaten with a one-two combination and the ‘SAS’ was truly born.

The Uruguayan netted two on his return with each coming from Sturridge assists, after the England forward had opened the scoring on Wearside.

Sturridge racked up eight goals from his first nine Premier League appearances of the season, whilst Suarez’s own goalscoring exploded.

West Brom were on the receiving end of a devastating combination in October, as Suarez helped himself to a hat-trick – including an audacious header from the edge of the area – in a resounding 4-0 win at Anfield.

Not to be upstaged, Sturridge netted the fourth goal in spectacular style, drifting forward before impudently and delicately lifting the ball over the stranded Ben Foster.

Suarez’s sensational season continued with a run of ten goals across just four games in December, including a stunning four-goal haul against Norwich at Anfield that represented his own Goal of the Season competition.

Norwich became the favoured opposition for Suarez during his time in English football, but even this was a new level of torment for the Canaries.

His fine form came as Sturridge was sidelined with an ankle issue, but their partnership resumed in the New Year and propelled the side into title contention.

Liverpool began the calendar year with a 16-game unbeaten run without defeat, whilst a sequence of 11 straight wins catapulted an improving side into the Premier League picture.

Each scored as Everton were thrashed 4-0 in the Merseyside Derby, before a free-scoring team beat Arsenal – top of the Premier League at the time of their arrival at Anfield – 5-1 in a statement showing.

That result began a run in which Liverpool scored 3+ in six consecutive league games, their results including thrilling wins over Fulham (3-2), Swansea (4-3), Manchester United (3-0) and Cardiff (6-3) as the Reds became the Premier League’s enthralling entertainers.

Operating intuitively on the same footballing frequency, the almost telepathic tandem of Suarez and Sturridge – alongside an effervescent Raheem Sterling and with a veteran Steven Gerrard pulling the strings from a deeper role – blew teams away as Liverpool charged towards the title.

Each were dynamic, driven, and hungry for goals, but found a balance between selfishness and selflessness that allowed their unique understanding to excel.

It was their movement in particular, Suarez full of hustle and bustle and Sturridge’s evasive drifts out wide, that truly had Premier League defences overwhelmed.

“As it turned out we complemented each other very well,” Suarez said in his autobiography, ‘Crossing the Line’.

“It’s hard for defenders when there are two players who are mobile. If you have someone like Daniel who moves well, who’s quick, who finishes chances well, then that makes space for me and vice versa.”

The sight of the two in conjoined celebration became a familiar one. Sturridge’s signature flapping arms and Suarez’s pistol-fingered salutes were often followed with an embrace from the other, the two rarely far from one another’s side during a season of spellbinding football.

Liverpool’s title challenge, however, thudded to a halt. Gerrard’s infamous slip against Chelsea handed the title initiative back to Manchester City, before the club’s collapse at Crystal Palace – squandering a 3-0 lead to draw at Selhurst Park – was perhaps a microcosm of a team with both verve and vulnerability.

Sturridge scored a career-best of 21 league goals of his own, the first time two teammates have finished first and second outright in the race for the Golden Boot. Their 52 combined goals is also a Premier League record for a 38-game campaign.

Their partnership came to an end that summer however, as Suarez set sail for Barcelona and completed a £75m move to the Camp Nou.

He remained with Liverpool until 2019, but departed after becoming a sporadic part of the club’s plans. Injuries no doubt contributed to his demise and robbed him of the explosiveness that thrilled in 2013/14, though his individualism was also at odds with the relentless running required following Jurgen Klopp’s arrival as manager.

Winning the Premier League would have been the crowning glory for the partnership of Suarez and Sturridge, though it is a unison that should be celebrated regardless of their failure to do so.

For a short period in the 2013/14 campaign their attacking alliance was truly thrilling, the sort of entertaining edge-of-your-seat football well worth the cost of admission at Anfield.