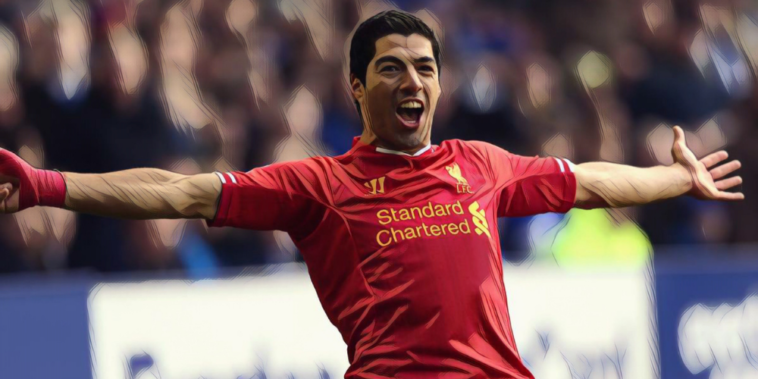 Love him or loathe him, Luis Suarez became one of the most colourful and controversial characters in the history of the Premier League during a memorable three-and-a-half year spell in English football.

The Uruguayan upset top flight defences – amongst other people – during a brief period as the division’s best player at Liverpool, with his final season on Merseyside one of the greatest individual campaigns the league has seen.

We’ve decided to look back at his 2013/14 campaign and a stunning season for the forward, remembering just how special Luis Suarez’s performances were in his final Premier League season:

That Suarez was even a Liverpool player heading into that campaign came as a surprise to many, the forward having hinted in no uncertain times he was ready to quit the club after the Reds had stuttered to a seventh-placed finish under Brendan Rodgers.

Suarez, of course, had ended the previous season in disgrace after earning a 10-game ban for biting Chelsea’s Branislav Ivanovic, four of which were served in the final stages of the 2012/13 campaign.

“I know it is normal being followed by the press but it was too much. The straw that broke the camel’s back was my mistake. I accept my fault, but they went too far.

“I don’t have any offer yet, and I don’t know when I will leave, but it is a good moment for a change of environment after all I have been through in England.

“I have only words of thanks to the club, the fans of Liverpool. It is a spectacular club, but they are aware of the way that the press treats me. It is normal that it is impossible to say no to big teams for which one always dreams.”

Real Madrid had circled the unsettled star, before Arsenal came in with their now infamous £40,000,001 offer, having been informed of a release clause in Suarez’s contract at Anfield.

Liverpool, somewhat unexpectedly, were able to hold on to their talisman and it would prove to be the catalyst behind a memorable season for both club and player.

Suarez made his return to first-team action in a League Cup defeat at arch-rivals Manchester United in late September, before marking his first Premier League appearance of the campaign with two goals in a victory over Sunderland at the Stadium of Light.

Liverpool – aside from a home defeat to Southampton – had made a solid start to the new season with Daniel Sturridge excelling in attack, though the return of their Uruguayan talisman increased hopes the club could contend for a top four finish after three seasons without Champions League football.

That brace in the North East proved the catalyst behind a brilliant run of form for the Reds’ number seven, who hit nine goals in his first eight league appearances of the season, including a hat-trick against West Brom at Anfield and a Merseyside derby goal at Goodison Park.

The best, however, was yet to come with Norwich once again Suarez’s preferred opposition.

Suarez had already scored two previous hat-tricks against the Canaries and proceeded to become the first Premier League player to score three trebles against the same opposition in early December, netting a four-goal haul in a 5-1 thrashing of Chris Hughton’s side.

The first was arguably the best of the lot, a dipping effort from all of 35-yards before adding his second from close range following a corner. The forward’s renowned audacity was evident once more with a delightful third, flicking the ball past Leroy Fer before executing a perfect half-volley.

He completed his haul with a curling free-kick into the top corner, an electric display from a player at the top of his game – any doubts over his commitment to the cause having been swiftly forgotten.

The goals flowed in incredible fashion during a stunning December for Suarez, the forward following his four-goal destruction of Norwich with three consecutive braces throughout the month, including scoring twice in a 5-0 thrashing of Tottenham at White Hart Lane.

Alongside Suarez, Daniel Sturridge was also enjoying the best goalscoring season of his career, whilst emerging talents Philippe Coutinho and Raheem Sterling provided the ammunition.

Steven Gerrard also seemed reinvigorated in a deeper midfield role, though it was Sturridge who truly got the best from his strike partner, Liverpool’s ‘SAS’ partnership dovetailing to perfection to blitz top-flight defences.

Suarez’s goal tally stood at an incredible 19 league goals in just 12 appearances by Christmas Day, but back-to-back defeats to Manchester City and Chelsea meant Liverpool slipped from top spot to fifth heading into the New Year, despite the best efforts of the prolific boy from Montevideo.

Liverpool continued to score freely, hitting five goals in a thrilling victory at Stoke before thrashing city rivals Everton 4-0 at Anfield, but it was a fixture against league leaders Arsenal that truly instilled belief in their push for the title.

Rodgers’ gung-ho side dismantled their north London visitors 5-1, scoring four times in the opening 20 minutes to move back into contention for a first Premier League crown.

Suarez failed to score in that fixture as he went four games without a goal, but a strike at Southampton saw the forward return to form as Liverpool embarked on a run of momentum that had the red half of Merseyside dreaming of title success.

Another goal following in a comfortable victory over Manchester United at Old Trafford, before a third hat-trick of the season as Rodgers’ side hit six at struggling Cardiff City.

Liverpool were riding the crest of a wave, and Suarez was at the forefront of it.

Rodgers side racked up a run of nine consecutive victories – including another demolition of Tottenham in which Suarez scored and starred – ahead of a huge clash against Manchester City, the two sides having emerged as the favourites for the title and Anfield became a cauldron of feverish atmosphere.

A topsy-turvy encounter saw Liverpool race into a two-goal lead before City came back to level, only for Philippe Coutinho’s winner to swing the title momentum in the Reds favour and lead to an impassioned on-pitch speech from captain Steven Gerrard at full-time.

“This does not f****** slip” were the now immortal words of Gerrard, ones which came back to haunt the midfielder in sensational style.

Suarez scored once more as Liverpool won at Norwich – taking his tally to 30 goals for the season – before an ill-fated afternoon against Jose Mourinho’s Chelsea that would be forever cemented in Premier League folklore.

Gerrard’s unfortunate slip allowed Demba Ba to score the opener as the west Londoners put a huge dent in Liverpool’s title pursuit, one which would be all but ended after throwing away a three-goal lead against Crystal Palace in their next fixture, a contest which saw Suarez leave the Selhurst Park pitch in tears.

City finished the season with a flawless six-game winning run to win the title, Liverpool agonisingly finishing short in their quest for an elusive Premier League crown despite the heroics of the Uruguayan talisman.

Suarez finished the season with 31 goals in just 33 appearances – a record in a single Premier League season at that time despite missing the first five games through suspension – winning the Golden Boot alongside a PFA Player’s Player of the Year and FWA Footballer of the Year double.

He finished with 12 assists in addition to his 31-goal haul, whilst the excellence of his partnership with Sturridge saw the England international finish as runner-up to his teammate as the league’s leading scorer.

It would prove the last season we would see Suarez in English football as Barcelona came calling in the summer of 2014, the forward making a £75m move to the Camp Nou that was accelerated by another biting incident at that summer’s World Cup.

Suarez’s actions mean he will never be revered like some of the greats to have played in the Premier League, but few have produced such consistent brilliance throughout the course of a campaign.

Love him or loathe him, his 2013/14 performance remains one of the great individual seasons.