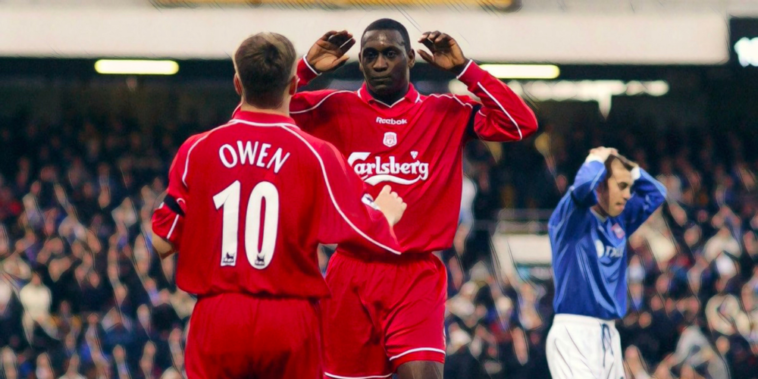 Liverpool were on the rise under Gerard Houllier as the new millennium arrived, the Frenchman having overseen an overhaul of a team struggling to replicate the success of past eras.

The nineties had been a testing time for a club used to domestic dominance, a period of indifference as Liverpool failed to challenge for much of the Premier League’s first decade of existence.

Houllier’s arrival had seen shoots of growth at Anfield, a collection of exciting academy graduates and a series of astute signings having raised optimism that those foundations could blossom.

Liverpool had the fortune of producing not one, but two, elite goalscorers from their own ranks in quick succession, with Robbie Fowler and Michael Owen each enjoying spectacular emergences.

Fowler was first to breakthrough and scored at a staggering rate, becoming the youngest footballer to reach 50 goals in the Premier League. Owen, explosive and exciting, soon followed suit and starred on the biggest stages for club and country before he had left his teens.

Despite their obvious individual talent, a partnership between the two never truly clicked and in search of synchronisation Liverpool spent a club-record £11m in March 2000.

Emile Heskey arrived with a growing reputation after impressing for a Leicester team that reached three League Cup finals in four seasons under Martin O’Neill, winning twice at Wembley.

Heskey’s hulking frame and selfless style was seen as a perfect compliment to Liverpool’s attacking options and his first full season saw him strike up an understanding with Owen that would fire Liverpool to trophy success.

Heskey and Owen had first crossed paths in England’s youth sides. The former was a talented prospect whose physicality allowed him to dominate less-developed opponents, whilst Owen was the boy-wonder destined to reach the very top.

It took little time for their on-field relationship to click into gear.

“I was in England U18s and saw Michael come along,” Heskey later told LFCTV.

“I’d heard a lot about Michael – from the age of 15 I think he started to get the headlines – and then he came along with us to a couple of games and a tournament. He was just phenomenal.

“You knew with Michael, once he gets an opportunity, he was going to take it – he was great like that from a young age.

“Our chemistry just clicked because I was a guy who was more of a feeder, I’d feed people. And when you’ve got someone who can finish like Michael, it makes for a good partnership.”

In their first full season together at Liverpool the two combined for 46 goals, a contribution which saw Liverpool reach three major finals and contest a mammoth 63-game campaign.

In tandem the duo were a potent mix of pace, power, work-rate and movement, a classic ‘big man, little man’ partnership that propelled Houllier’s hungry side through an unforgettable campaign.

The 2000/01 season began with Heskey scoring the winner in a 1-0 win over Bradford and both forwards began the season in reasonable form, each hitting Premier League hat-tricks before the autumn had ended.

Owen had won back-to-back Premier League Golden Boots as a teenager before a hamstring injury stalled his progress, but the presence of Heskey alongside him allowed the forward to return to his brilliant best.

“It’s very easy to play with someone you know is doing their best for the team. If you know someone is going to be selfish, you know he’s going to have a shot all the time, you’ll look to put yourself in position for the rebound.  But that might not be the best place to be.

“If you know your partner in crime is going to make the best decision for the team, you can read that and get yourself in the right place. Fact was, Emile helped me make the right decisions.”

Liverpool’s league form began inconsistently but recovered sufficiently to secure a third place finish and Champions League qualification. It was in cup competition, however, where the Reds excelled.

Houllier’s side ended the season with UEFA Cup, FA Cup and League Cup winners’ medals and the Frenchman tellingly selected Heskey to start in all three finals, despite the more obvious goalscoring threat of both Owen and Fowler.

Each had crucial roles in the treble of triumphs, with Heskey scoring the crucial semi-final opener against Wycombe in the FA Cup, before Owen’s infamous match-winning performance saw Arsenal beaten in the final.

In Europe it was Owen who again took centre stage, his double in the last-16 win over Roma set Liverpool on the road to UEFA Cup success and he netted again in the final during a chaotic 5-4 win over Deportivo Alaves in Dortmund.

“That was when we were at our pinnacle as a partnership,” Heskey said. “That was when everything clicked. We didn’t just hit a purple patch, we had a purple year. And the Germany game was what we were all about.”

That Germany game remains one of England’s most iconic results of the modern era, as the Three Lions’ old rivals were torn apart in a ruthless World Cup qualification performance in Munich.

Owen had replaced the retired Alan Shearer as England’s focal point and Sven-Göran Eriksson was keen to utilise a club chemistry on the international stage.

Germany had lost just once previously on home soil in a World Cup qualifier, but in September 2001 were blown apart with Owen and Heskey combining in ruthless fashion at the Olympiastadion.

Owen scored a stunning hat-trick – an individual showing which contributed to his coronation as winner of the Ballon d’Or – with Heskey adding the fifth in a defining performance in their partnership.

The two combined for the third goal, as a Heskey header was cushioned into the path of Owen to rifle past Oliver Kahnn.

The 2001/02 season had began with both among the goals as Liverpool beat Bayern Munich to win the UEFA Super Cup, whilst Owen scored the winning goal as the Charity Shield arrived and made it five trophies within the calendar year.

Liverpool’s prosperous partnership combined for 42 goals in all competitions, but a season that had promised much ended in disappointment.

Houllier had prematurely proclaimed his side were “10 games from greatness” after entering April a point off the Premier League leaders and preparing to face Bayer Leverkusen the quarter-finals of the Champions League.

In the end it was Arsenal who were crowned champions and Liverpool lost to Leverkusen after a capitulation in Germany, ending the season trophyless and with the best of Owen and Heskey behind them.

Owen remained a prolific presence before his departure to Real Madrid in 2004, whilst Heskey left in the same summer after a more modest goal return across the following campaigns. The latter, unfairly, became a common punchline during his latter seasons as the goals dried up.

To view Heskey based merely on numbers would be a severe injustice, however, a footballing facilitator who brought the best from those around him.

He was appreciated by teammates and managers alike, with Alan Shearer – the Premier League’s all-time record goalscorer with 260 goals – earning just a single England cap more than Heskey.

Few were more appreciative than Owen, who was well aware that opposites can attract and the contrasting styles of the duo created a chemistry to lead Liverpool to success. Their four season spell at Anfield saw the duo start 74 Premier League games together, scoring 72 goals in the process.

Owen’s award of the Ballon d’Or in 2001 was the equivalent of an Oscar for one of England’s greatest goalscorers, but in Heskey he found the ideal Best Supporting Actor to share the spotlight with.