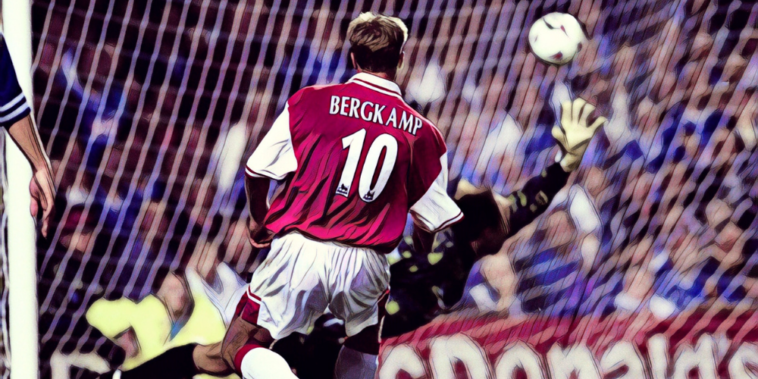 Dennis Bergkamp’s arrival at Arsenal became the catalyst for the club’s great sides of the modern era, the forward arriving from Inter Milan to etch his name into the fabric of the capital’s most successful side.

Bergkamp had risen to prominence as a product of Ajax’s renown academy system, starring during seven seasons with the Eredivisie outfit before a short period in Italy dented his flourishing reputation.

Arsenal’s decision to spend a club record £7.5m to sign the Dutchman was viewed as a gamble, the Gunners trebling their previous record investment as a side struggling for inspiration sought a desperate injection of quality.

The north Londoners had to be patient before being given their first glimpse of Bergkamp’s brilliance, as the marquee arrival’s first goals came with a double to down Southampton in his seventh appearance.

Bergkamp had been Bruce Rioch’s first signing as Arsenal manager, but the Scot with a penchant for conflict lasted just a single season before the arrival of Arsene Wenger unlocked the true potential in the Gunners’ gifted number 10.

Wenger and Bergkamp’s shared ideologies harmonised perfectly at Highbury, both possessing a passion for attacking intent and a desire to marry free-flowing football with results.

Arsenal had finished third in the campaign that saw Wenger succeed Rioch and as the 1997/98 campaign began optimism was high that the Gunners could mountain a sustained championship charge.

Wenger had formulated a side that blended the old-guard with the new, the famed back five of the George Graham era remaining resolute, whilst a series of exciting imports added a continental flavour further forward.

Bergkamp would be key to Arsenal’s hopes and it took little time for the Dutch architect to make his influence felt.

His first goals came with a double against Southampton in the Gunners’ third game of the campaign, a brilliant brace against opponents who often felt the force of the forward’s talents.

Wenger’s side had seen Marc Overmars’ opener cancelled out by Neil Maddison, only for Bergkamp to take matters into his own hands, his first coming following a surging run from just inside the Saints’ half, before lashing an emphatic second to put the result beyond doubt.

Four days later he produced a performance that ranks amongst the defining Bergkamp displays.

The fact that Arsenal somehow contrived to throw away a lead and draw 3-3 at Filbert Street has largely been confined to the hazy past, with the abiding memory of the clash the undeniable goalscoring genius of a soon-to-be club great.

Bergkamp’s hat-trick at Leicester was arguably his magnum opus, a wonderful work of artistic excellence and the most aesthetically pleasing treble the Premier League has seen.

He had already netted twice – including a wonderful curled effort from distance to open the scoring – before a wondrous third that encapsulated the very best of Bergkamp.

Bergkamp has regularly discussed his fascination for the science behind the ball, recalling a childhood spent analysing the different movements, spins and bounces as he perfected his uniquely adhesive touch.

His hat-trick goal was a culmination of his chase for controlled perfection, as a faultless first touch cushioned David Platt’s hoisted pass on his right foot, before his second – this time on his left foot without the ball touching the ground – bamboozling Matt Elliott and guiding Bergkamp inside the defender’s challenge.

Bergkamp took one more touch to steady himself, before his fourth fired the ball beyond Kasey Keller – an audacious moment in which the forward’s composure and quality exploded in the East Midlands.

He remains the only player in Premier League history to come first, second and third in the same Goal of the Month competition, a unique piece of history after starting the 1997/98 season in stunning style.

The goals continued to flow for Bergkamp as Arsenal picked up momentum in the title race, including scoring twice as Chelsea were beaten 3-2 in a thriller at Stamford Bridge.

As Wenger continued to coax the best from Bergkamp, Arsenal’s performances inevitably improved.

His goals came alongside assists, with the Netherlands international both creative in his passing and cold-blooded when chances arose.

Across the opening 10 games of the season, Bergkamp scored nine goals and created six more, with the Gunners’ first defeat of the season coming in his absence against Derby.

Arsenal were beaten again at Sheffield Wednesday with Bergkamp sidelined two games later, as part of a run of four losses in six fixtures that threatened to derail their title aspirations.

The latter of those defeats – a 3-1 home reverse to Blackburn – saw the Gunners reach the nadir of the season, but the loss also acted as a turning point and springboard to success.

Arsenal beat Leicester on Boxing Day before embarking on an unbeaten run across the second half of the season, with Bergkamp back amongst the goals as the north Londoners looked to claw back a gap to league leaders Manchester United.

Progress was also found in the FA Cup, Bergkamp’s glorious goal in extra-time helping Arsenal avoid the ignominy of a third-round exit to Port Vale, eventually triumphing on penalties at Vale Park.

He netted an opportunistic effort against Coventry in January to help the Gunners claim a point, before finding his form once more against Southampton after beating the offside trap to open the scoring.

Arsenal travelled to face Manchester United in early March in a decisive contest in their campaign, Marc Overmars scoring the only goal of the game as the championship momentum shifted from Old Trafford to north London.

Bergkamp scored the winner as Sheffield Wednesday were edged 1-0 in the following fixture, part of a sequence of four consecutive results of the same scoreline as Arsenal’s push for the title gathered pace.

Blackburn, Wimbledon and Barnsley all then fell victim to Bergkamp’s brilliance in successive weeks, the latter a glorious individual effort to add to his catalogue of mesmeric moments throughout the campaign.

21 years ago today Dennis Bergkamp did this for Arsenal at Barnsley.

Just another day at the office…pic.twitter.com/qDzeVPHmoy

Bergkamp saw his season cruelly curtailed after a hamstring injury sustained against Derby, missing the 4-0 win over Everton that confirmed Arsenal’s coronation as champions for the first time in seven seasons.

The FA Cup followed as Arsene Wenger’s side completed a domestic double with victory over Newcastle at Wembley, as a new era of success was ushered in to the northern region of the capital.

Arsenal’s double winners were full of names who each contributed defining moments, from the blistering speed of Overmars, to the tantalising talents of a teenage Nicolas Anelka.

Bergkamp, however, was in a class all of his own, scoring 22 goals across all competitions to be named as the PFA Player of the Year and FWA Footballer of the Year, becoming just the third foreign footballer to win the former accolade.

Bergkamp’s list of magical moments at Arsenal is a long one, from a second domestic double success, to the club’s ‘Invincibles’ campaign and that unforgettable goal at Newcastle.

The inimitable, immaculate touch, unfathomable goals, and an ability to seemingly stop time and leave fans open-mouthed, the 1997/98 season was, however, one in which he had no Premier League peer.