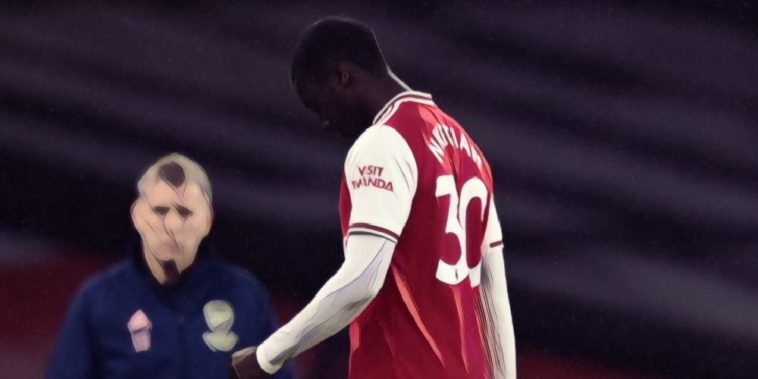 Ian Wright has disagreed with Mikel Arteta’s assessment of the refereeing decisions in Arsenal’s 1-1 draw with Leicester City on Tuesday night, with Eddie Nketiah being sent off almost immediately after his introduction.

The Arsenal youngster was initially shown a yellow card after his high boot caught Leicester defender James Justin on the knee just seconds after being brought on, before VAR advised referee Chris Kavanagh to review the pitchside footage, which prompted the decision to be upgraded to a red.

Mikel Arteta felt his player was harshly treated while also insisting Jamie Vardy should have also seen red after an incident with Shkodran Mustafi at the end of the first half, the veteran striker going on to net the late equaliser.

“The red card, he [Eddie] cannot see the player and didn’t want to hurt anybody. You have to understand he is a young kid,” Arteta argued in his post match interview with Sky Sports.

“It can be a red card but Leicester have to play for 10 men after 42 minutes. For one challenge between the 40 and 45 minutes.

However, even in spite of his Arsenal connections, Ian Wright insisted that the referee got both decisions correct.

“That’s just purely accident that. You can see Jamie Vardy has just slipped,” Wright said, as per The Mirror. “He’s not trying to hit him in the face. That’s accidental.

“He [Arteta] can say whatever he likes about the sending off [for Nketiah] – it was a sending off- no matter what he says about his age and stuff.

“The fact is you look back at that game and you can say chances have been missed. Arsenal have to be more ruthless in that department. The creativity in the past has not been great and that’s why we’ve been so dependent on Pierre-Emerick Aubameyang.

“But tonight the way they played they deserved another couple of goals. That would have taken the sting out of Leicester. Arsenal may have been able to control the game a bit more and catch them again a couple of times but the longer it went on with a team like Leicester they’re going to think ‘We’re still in this’ and they did.

“They came out the second half, they controlled it a lot better and the pressure was going to tell in the end.”